The deepwater Gabon South Salt basin represents one of the last underexplored regions of the West African continental margin. 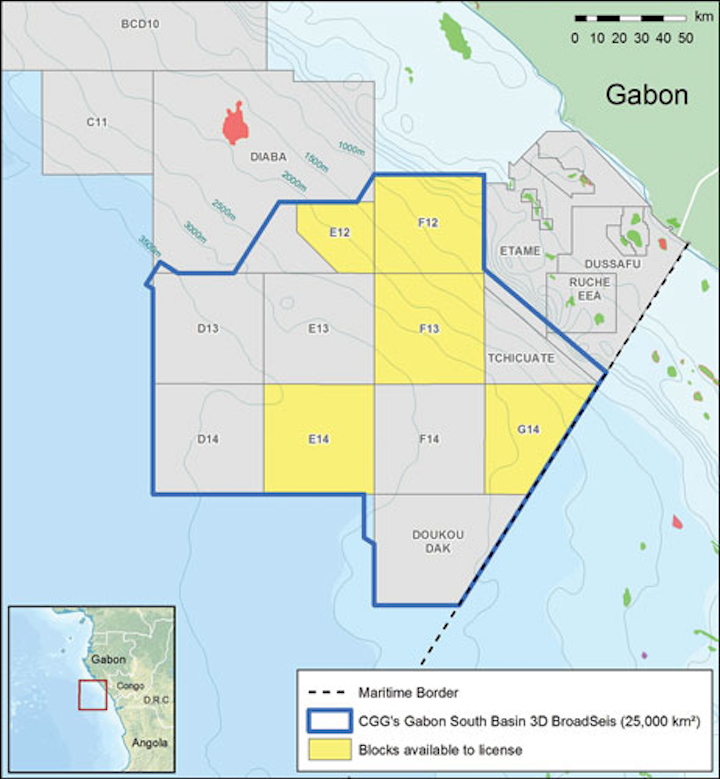 The deepwater Gabon South Salt basin represents one of the last underexplored regions of the West African continental margin. A new 25,000-sq km (9,653-sq mi) broadband 3D seismic survey was recently acquired in the basin as part of an integrated geoscience program to support the Gabonese Republic’s new deepwater 11th Licensing Round, which closes at the end of March. The program also includes complementary datasets with a full geological prospectivity report and a hydrocarbon seep study, which will be available on completion. Already, intermediate seismic data are revealing significant structures in the syn-rift section below the salt which may well be prospective for hydrocarbons if source and reservoir rocks similar to those found in the Diaba block to the north and the Etame block to the northeast are present. Given the high-quality results seen so far, final results are expected to be a significant resource for explorationists to de-risk this promising exploration arena.

A key motivation for acquiring a large 3D seismic survey as the starting point for the 11th licensing round in Gabon is to offer exploration teams consistent and comprehensive coverage of the whole area, so that they can evaluate opportunities in less time with increased confidence, and make faster drilling decisions. Despite the survey’s large size, acquisition time was shortened by the use of multiple vessels so that all 25,000 sq km were acquired in nine months. An advanced onboard processing system on one of the acquisition vessels enabled a fasttrack dataset with full 3D pre-stack time migration (PSTM) for the half survey acquired by this vessel to be delivered just three weeks after the last shot. By then combining pre-processing performed offshore with the onshore processing the full fasttrack PSTM was completed four months after the end of acquisition. A sample area of fasttrack reverse time-migrated (RTM) pre-stack depth migration (PSDM), showing the full potential of the data, was also delivered four months after acquisition, in time for evaluation ahead of the license round closure. The final, fully processed PSDM, with state-of-the-art 3D pre-processing and advanced velocity model building, will be completed just 15 months after the last shot.

The survey was acquired and imaged using the BroadSeis variable-depth streamer solution for broad bandwidth data with low-noise low frequencies. The far-field signature was estimated from measured near-field hydrophone responses, to deliver a better estimate of the bubble and the low-frequency signal compared to conventional pressure field modeling. This enabled accurate designature throughout the bandwidth, encompassing de-bubbling and zero-phasing in one step, to remove the imprint of the marine source system from the images and attributes of the subsurface. The accurate 3D source designature and deghosting complemented the 3D receiver deghosting, which used a progressive sparse Tau-Px-Py inversion, to ensure ghosts were correctly handled in this area of complex geology. This delivered the sharpest possible broadband wavelets with stable and accurate low frequencies.

This large survey is being processed using the latest imaging technology to produce the clearest images in time for the licensing round. Interpretation and modeling of the velocities within the timeframe required the collaboration of five interpreters drawing on their combined experience and expertise to produce what is believed to be the largest salt interpretation ever performed on a single survey. There are few wells in the area to calibrate the interpretation and velocity modeling, and those that are present do not pierce the salt. Gravity data, acquired alongside the seismic, are being integrated into the modeling to constrain and validate the presalt velocities. This is necessarily an iterative process as the seismic data are also being used to create the density model that is used in the inversion for interpretation of the gravity data.

Multi-layer tomography and full waveform inversion (FWI) are being used to create the final velocity model. This is probably the largest FWI project to be undertaken offshore Africa and unusually for a survey of this (or any) size, RTM is being used in the velocity model building iteration. The high-quality, low-frequency data acquired using the BroadSeis solution is particularly beneficial for FWI as the low frequencies prevent cycle-skipping. Early test results already show the imaging benefits from the FWI velocity model, both in the shallower section where there are corrections of pull-up/push-down image distortions and in the deeper salt bodies where salt flanks and subsalt reflectors show improved focus and continuity due to better overburden description.

Overall, the FWI velocity model provides uplifts in resolution, especially at shallow-to-medium depths, with a number of the model features being consistent with the geological structures seen in the migrated seismic. There is also evidence of slow-velocity gas pockets, usually located directly above the salt diapirs. Modeling these low-velocity anomalies avoids the push-down effect on the data that these usually cause and so improves the image in both shallow and deep sections, as well as yielding additional useful information about the near-surface and any possible geohazards.

The fasttrack PSTM volume shows clear uplift over the existing data, while the fasttrack PSDM shows the full benefits of advanced velocity modeling and depth-migrated modern broadband 3D seismic data. The uplift in subsalt imaging that will be achieved in the final dataset is dramatic; the fasttrack RTM fully depth-migrated example line shows clearly defined tilted fault blocks and horst features as well as the highly complex nature of the thrusted and distorted salt and sediment overburden.

Imaging of structure below the salt has been sporadic at best on the pre-existing 2D seismic data. Even the regional grid acquired in 2009 with long-offset acquisition and processing techniques only revealed restricted windows through the salt in the areas where it was not particularly thick or complex. The benefit of the BroadSeis solution is the presence of the very low frequencies, down to 2.5Hz, that are acquired during acquisition, which can penetrate through the thick, complex salt, combined with the advanced and customized imaging technologies that can fully leverage this data to deliver clearer images, and ultimately a better understanding of the presalt geology.

The example line shows the syn-rift structure revealed below the salt and the deeper, pre-rift section beneath the strong, more steeply-dipping reflection on the right. A significant amount of faulting is evident in the syn-rift sediments. To the left, mainly shallow-dipping, down-to-the-basin, possibly listric faults predominate, while more steeply-dipping out-of-the-basin faults predominate to the right. A significant horst feature separates these two regimes. The potential for simple fault traps is high and rollover of the sediment package into the down-to-the-basin faults could set up some large closures.

The improved low frequencies and advanced depth imaging made possible by the broadband solution show the limitations of legacy data at imaging through the salt. Now the complexity of interpreting the salt structure in this area is greatly reduced. Rafting of the Madiella carbonates above the salt also causes significant imaging challenges due to the complex geometries of the rafts and their high internal velocity. These again are much better imaged with the new depth-migrated broadband data, with their internal structure being clearly defined.

In parallel with the processing and interpretation of the seismic data, CGG GeoConsulting’s Robertson group is conducting a comprehensive geologic review, which will investigate source and reservoir rock presence and maturity as well as the timing of presalt trap formation and its impact on the generation, migration, and entrapment of hydrocarbons. It will also look at the regional geological context from a plate tectonic timing perspective and produce regional palaeogeographic maps for key periods addressing the play elements. Wells will be incorporated and stratigraphy and formation tops checked for consistency.

When the fully depth-migrated seismic dataset is available later this year, this will be combined with information from the geological review to produce detailed reservoir and source facies maps as part of a prospectivity report for the area. Images from the fasttrack datasets are already delivering remarkable insight into the geology of this underexplored area, and the industry response so far has been that the final survey results will revolutionize understanding of the Gabon basin. The final complete geoscience package is expected to contribute significantly to the knowledge of this prospective area and its development as a major hydrocarbon province.