Time-lapse (or 4D) seismic allows for the visualization of changes in the reservoir resulting from production-related variations in pressure and saturation.

Time-lapse (or 4D) seismic allows for the visualization of changes in the reservoir resulting from production-related variations in pressure and saturation. It has been successfully applied in many fields. However, in theGulf of Mexico (GoM) and several other regions in the world, the time-lapse technique is very challenging subsalt. In this situation, the 4D repeatability becomes much worse and it is difficult to separate signal from noise.

A large portion of the future GoM production is subsalt, and it would benefit from quality 4D seismic data. The observations presented here may help to resolve the subsalt 4D problem.

For our purposes here, noise levels or data quality levels will first be defined. There are several methods used to extract 3D noise levels from seismic data quality. The goal of the 3D noise map is not only to show where the noise level is high within a field, but to be able to compare one processing flow to another and ideally present a quantitative measure that can be compared from one field in one region to any other field in any other region.

Several 3D noise level measurements are compared in this study: signal-to-noise ratio (SNR), coherency, and average amplitude extractions. The SNR maps are calculated by dividing the cross-correlation by the autocorrelation.

Instead of comparing one dataset to another in NRMS, to calculate 3DNRMS, a dataset is compared to a smoothed version of itself. This smoothed version is created by flattening the data along a horizon and applying a 3D average smoothing function. If the reflectors are parallel to the horizon and there is no noise in the data, the resulting 3DNRMS is zero. If there is additional noise in the data, the 3DNRMS goes up.

The 3DNRMS maps and SNR maps are very comparable.Unfortunately, real geological events with a high spatial frequency, such as faulting or stratigraphy, show up as 3D noise. On the other hand, coherent noise events can show up as low 3D noise. Examples are multiples or coherent subsalt events such as shear wave modes. These events are an issue with which all 3D noise levels measurements struggle, so the 3D noise map has to be carefully constructed and checked.

Of the 3D noise measures studied, 3DNRMS is preferred because it is independent of amplitude strength. Therefore, it not only provides a good 3D noise map within a field, but can also be used to compare different processing flows and different fields to each other. The other advantage is that when 3D and 4D noise are compared, the exact identical horizons and zones of interest can be used.

Both 3D and 4D noise are affected by a large number of variables. All of the following parameters affect the amount of noise in the final dataset:

Note that all of these parameters affect both the 3D and 4D noise in a similar manner. For example, an incorrect velocity model results in both a lower quality 3D and a lower quality 4D image.

Of course, there are more factors impacting the 4D noise than the 3D noise. For example: source-receiver repeatability, source signature, water velocity or other statics, and consistent 4D processing.

Correlations between 3D and 4D noise have historically been made by others. All show a clear relationship between SNR and NRMS.

This relationship was tested on data obtained from a field in thedeepwater GoM, then used in a forward prediction mode for 4D feasibility studies and future time-lapse acquisition.

Shown here are 3D (labeled A) and 4D (labeled B) noise maps over Field 1, just above the main reservoir level. The northern part of this field is subsalt. Both maps are generated using the same horizon and the same interval. A strong correlation between the two maps can be observed. Both images show a strong impact of the structure, the illumination and the salt on the data quality. To the north, where the reservoir goes subsalt, the noise increases for both the 3D and 4D cases. The steep dips on the south flank of the reservoir are poorly imaged, resulting in high noise levels for both maps. These two maps of 3D and 4D noise have a high correlation with a coefficient of determination (R2) of 0.74.

The following methodology is proposed for generating spatially varying 4D noise maps. A 3D noise level map is generated from the existing 3D dataset. The correlation between 3D and 4D noise levels is then used to make a prediction of the expected 4D noise level.

This workflow has been applied to Field 2. Here, predicted 4D noise levels are shown for both the extra salt and subsalt portions of this field, indicating where in the field issues are expected to allow a good 4D signal. The prediction is especially helpful in the area at the edge of salt, where it would not make sense to have a sharp jump in 4D data quality at this exact point. This new map shows a more gradual transition of 4D noise levels from extra salt to subsalt and not a discrete boundary.

Degrading of the 4D noise levels is visible beyond the salt edge, which continues even further beneath the salt body.

This first step is a qualitative method that describes which parts of field are the most likely to have good 4D data quality. The next step is to predict the 4D noise level in a quantitative method by establishing a ratio between 3D and 4D noise from other fields with similar acquisition and processing, and then using this ratio to convert the 3D noise map into a predicted 4D noise map.

For the quantitative workflow, a good range of datasets with equal acquisition and processing characteristics is needed, which might not be available. A simpler method to get a more quantitative comparison is to calibrate the predicted 4D noise map in an extra salt area to the expected 4D noise ratios from regional experience. For example, in the figure above, the extra salt NRMS value could be calibrated to a value around 6%. This value is the expected NRMS value in 4D data in an extra salt area acquired with nodes.

An important conclusion that can be drawn from the correlation between 3D and 4D noise is that 4D noise levels could be reduced similarly to 3D noise level reduction. By acquiring more offsets and azimuths; improving the velocity model; and improving the imaging and all other methods that result in better 3D images, 4D noise levels would also be reduced. This is easier said than done, since 3D imaging is already pushed as much as possible. In addition, these methods must be applied in a 4D-consistent manner, which might be difficult for some of the complicated acquisition styles.

As more datasets are tested with the observations that were made in this paper, the 4D subsalt problem will hopefully be solved. 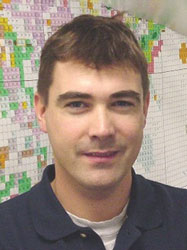 Jean-Paul van Gestel is the lead seismic analyst of BP’s Gulf of Mexico Production Team in Houston, focusing on time-lapse analysis and attribute analysis, specifically for subsalt fields. He has worked for BP for 15 years, in Upstream Technology, Brazil Exploration, and on the Life of Field Seismic (LoFS) Project for BP Norway. A member of the Society of Exploration Geophysicists and the European Association of Geoscientists and Engineers, Van Gestel was the first author of a publication on the integration of LoFS data that won SEG’s “The Leading Edge” best paper award in 2008. He also served on the EAGE distinguished lecture program in 2010. He and his colleagues won the Bonarelli award for best oral presentation at the 2009 EAGE meeting. van Gestel received his M. Sc. degree in Geophysics from the Delft University of Technology in 1996 and his Ph. D. in Geophysics from The University of Texas at Austin in 2000.

The author wishes to thank BP colleagues for discussion and feedback, as well as BP, BHP Billiton, and ExxonMobil for permission to show the data. Based on a paper presented at the SEG annual meeting held in New Orleans, Oct. 18-23, 2015.