When Mexico's Energy Reform was signed into law in 2014, it was clear that the potential for foreign investors would be significant. 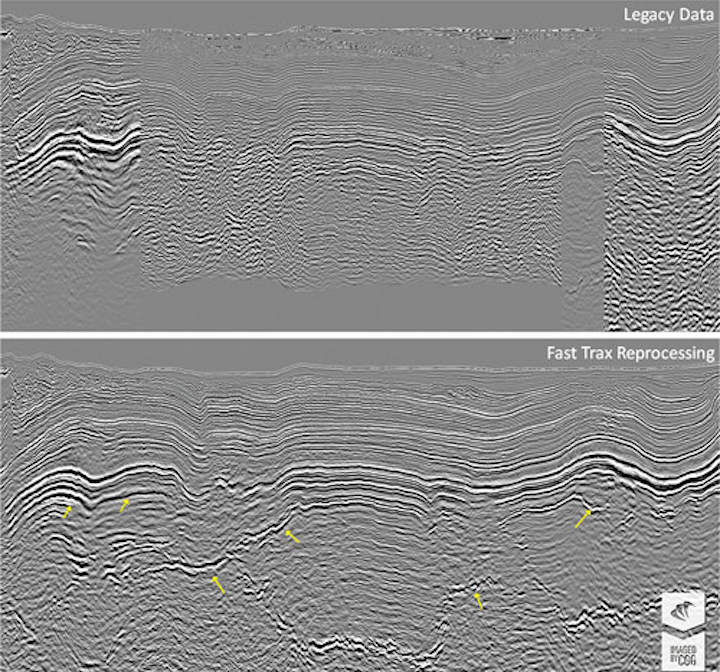 WhenMexico’s Energy Reform was signed into law in 2014, it was clear that the potential for foreign investors would be significant. A November 2013 report from JPMorgan Chase & Co. saw that outside investment could increase by as much as $15 billion.

However, what was not clear then was the extent to which the resulting licensing rounds would prop up geological and geophysical activity in the area through the worst oil economy in decades.

“The driving force in theGulf of Mexico for seismic acquisition in the past two years has been the opening up of the Mexican offshore and the subsequent speculative surveys which followed,” Craig Hunter, Seismic Editor, Marine, for IHS Markit, told Offshore.

Reportedly, 21 E&Ps have registered to submit proposals for the upcoming Round 1 Phase 4 (or Round 1.4) deepwater auction, expected to occur in December. The areas being bid out are estimated to contain 4 Bboe in reserves, 22% more than those in earlier stages. Deeper water brings higher stakes: G&G companies are working to acquire and reprocess area data, hoping to provide high-quality datasets to those eager to stake their claim on offshore Mexican acreage.

Starting in late 2015, the company also worked simultaneously to acquire the Gigante multi-beam, coring, and geochemical survey over a 600,000-sq km (231,661-sq mi) area. TGS contracted Fugro to complete a seep-hunting survey to assist in identifying sites where fluids escape to the seafloor. Fugro said this data will be used to target hundreds of sites for coring and geochemical analysis. The company first deployed theFugro Brasilis, later sending the Fugro Gaussto join in what it claims is the world’s largest seep-hunting survey. Both vessels are using hull-mounted multi-beam echosounders (12 kHz on Fugro Gaussand 30 kHz on Fugro Brasilis) and sub-bottom profiler systems to map the area.

Processing of the Gigante survey has been ongoing, with fasttrack PSTM and preliminary PSDM products available in advance of the scheduled licensing rounds. It represents TGS’ single largest 2D seismic survey.

Additionally, TGS is partnering once again with Schlumberger in the full-azimuth (FAZ) survey multi-client Revolution XII and XIII surveys, which will cover about 7,150 sq km (2,761 sq mi) in the Green Canyon, Atwater Valley, and Ewing Bank protraction areas of the central GoM. Announced in August, acquisition is expected to end in 1Q 2017, with final processed data available in early 2018.

The companies began cooperating in 2008 with the Freedom wide-azimuth (WAZ) survey, later followed by the Liberty WAZ and Patriot M-WAZ surveys.

Also concluded in October is the Buscador near-shore 2D survey, which began in July. It was undertaken by project partners BGP, which utilized itsBGP Pioneerhigh-capacity survey vessel, and c, which optimized the survey design using its Seisintel database, which draws on geospatial products derived from the Automatic Identification System.

Searcher said the project takes in 11,200 km (6,959 mi) of long-offset 2D data over near-shore areas on offer in licensing rounds 2, 3, and 4, covering proven mature and semi-mature regions and extending into shallow-water areas. The data is, as of this writing, being processed at DownUnder GeoSolution’s Houston site. Fasttrack data is expected in December, with final data deliverable next year.

Beyond seismic acquisition, there has also been a host of reimaging and reprocessing work. In September, CGG delivered the Fast Trax Reverse Time Migration (RTM) data from its high-profile Encontrado multi-client “mega-merge” project.

“We wanted to have the best data we could in time for the licensing round, and we have managed to do that,” CGG Senior Vice President, Multi-Client & New Ventures, Western Hemisphere, Matt Bognar said, speaking toOffshore. “Our new ultra-modern images give the industry a very large regional overview of the exploration blocks being offered in Mexico’s licensing round.”

The Fast Trax results are available now for license on a non-exclusive basis, with final imaging datasets expected next summer.

Encontrado melds a whopping 38,000 sq km (14,671 sq mi) of WAZ data from more than nine previously acquired and processed surveys. It covers areas home to recent discoveries including Great White and Trion - which will be PEMEX’s first-ever proposed joint venture with private partners - to the north and Corfu and Ixcuta farther south. More than 35,000 sq km (13,513 sq mi) of the data is in the Mexican sector of the Gulf of Mexico.

“The net result is we’re trying to give a tool for the oil companies to reduce their risk. The better we can image and understand the complexity of these subsalt structures, the less risk they have. These are very expensive wells they’re drilling,” Bognar said.

In May, CGG announced that its Mexican entity, CGGVeritas Services de México S.A. de C.V., was selected as one of a handful of companies to be registered by Mexico’s Comisión Nacional de Hidrocarburos (CNH, or National Hydrocarbons Commission) as an independent third-party qualified to audit and certify the country’s reserves, either for oil and gas operators or directly for the CNH.

Elsewhere in the GoM, less than one month after news of its collaboration with TGS, Schlumberger WesternGeco informed that it would partner with ION Geophysical Corp. on a 3D multi-client reimaging broadband program offshore Mexico, using Mexico’s data library. The Campeche 3D reimaging program comprises three survey areas covering about 82,000 sq km (31,660 sq mi) in the Bay of Campeche. It will be processed using a combination of technologies from both organizations. Fast-track data is available now.

ION’s Mexican entity was approved by CNH in September to conduct reserve audits. Additionally, earlier this year, PEMEX extended its multi-year contract with ION for data processing on multiple surveys.

However, IHS Markit’s Hunter cautioned against regarding this flurry of activity as a sign of a market rebound. He does not see a net gain in crews.

“The completion of various 2D programs from late 2015 until October 2016 has seen the number of vessels operating in this market go from 12 to two year-on-year,” he said.

“The recent announcement by TGS and WesternGeco regarding a new wide-azimuth seismic program in the US Gulf of Mexico has simply seen one of the crews working in the Bay of Campeche return to the familiar territory of the Central Gulf of Mexico. WesternGeco has worked consistently with one or two crews in the latter region for many years - really only breaking for the Mexican program it commenced in July 2015...

“WesternGeco will add to the numbers in the region when it brings an OBC crew to Mexico for a major contract with PEMEX. However, when we note that two OBN crews were working in the US Gulf of Mexico last year for FairfieldNodal and EMGS was carrying out EM surveys offshore Mexico, there seems little evidence of a resurgence in the market,” he concluded.

A deeper look into Encontrado

“Even though most of that data was wide-azimuth, and is fairly modern, good-quality data, the processing technology changes at a very rapid pace,” Bognar said. “So, we felt like there was room for us to go in and apply new processing and improve the data and provide some value to the customers.”

Bognar said that the company looked for improved continuity in the reflectors, with an endgame of building a better velocity model to improve its ability to image the data.

CGG processed the data through an advanced high-end sequence including bandwidth extension and 3D deghosting, which Bognar pointed to as a major factor in its improvement. In addition, he said the company ran an updated, more modern version of the 3D surface-related multiple elimination and noted that probably the biggest difference maker was the full-wave inversion (FWI) and Kirchhoff migration.

“We expect to see some uplifts from that,” he said.

Along with the FWI, tomography is also being used to enhance the velocity model.

The Encontrado reprocessing provides a seamless link to CGG’s larger multi-client datasets in the US Gulf of Mexico, including StagSeis which was specifically designed to deliver long-offset, full-azimuth broadband data for optimal subsalt imaging. The US 10-year lease cycle means that some highly prospective adjoining US blocks will also be becoming available. Combining these sets of data delivers a big-picture understanding of this challenging and prolific geology.