Rystad Energy expects 50 oil and gas fields in the Southeast Asia region to be approved for development between 2018 and 2020. 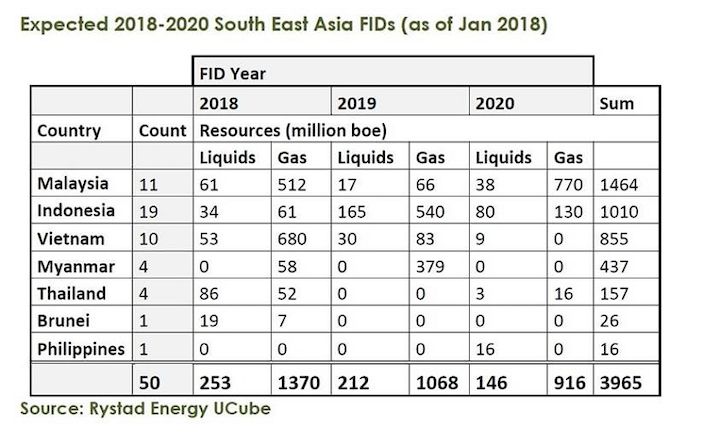 SINGAPORE – Rystad Energy expects 50 oil and gas fields in the Southeast Asia region to be approved for development between 2018 and 2020.

The collective resource is 4 Bboe, with associated greenfield capex of $28 billion from the final investment decision (FID) to first production.

There should be higher overall investments in brownfield, maintenance, and infill drilling activities at existing projects, Rystad added.

Some of the 50 projects are later phases of earlier developments, with the largest infrastructure already in place.

Indonesia, with 19 fields, is the dominant country in the region’s FID forecast, but Malaysia accounts for the largest percentage of overall resources to be developed (37%) and required capex (42%).

Sapura Energy will likely progress some of the smaller fields in Sarawak offshore block SK408, while larger projects such as the Jerun field in SK40 will probably be approved toward the end of the forecast period.

Gas is set to comprise 85% of the resources reaching FID over the full period - the largest volume in 2018 coming fromVietnam’s block B project.

Most of the gas to be developed in Indonesia and Malaysia will head to existing LNG plants.

Islam said: “Strong economic growth has led to burgeoning domestic gas demand throughout the region. The resulting uptick in local gas prices as well as the pollution profile of the fuel compared to alternatives means both operators and governments are incentivized to push natural gas projects.

“Countries such asMyanmar, with offshore gas discoveries and a still emerging local gas market, look set for an export boom.”