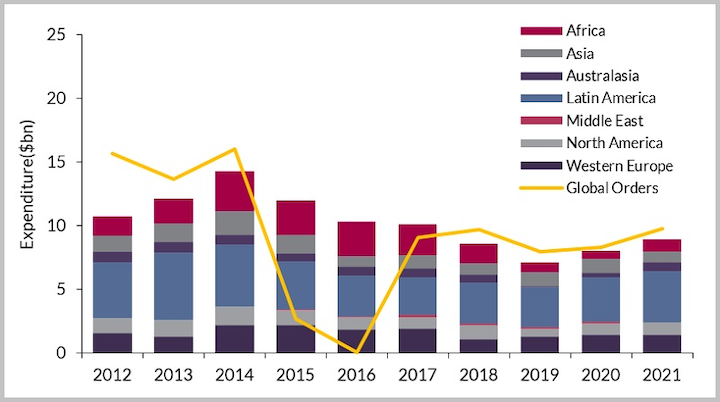 Capex for both installations and orders has increased by 12% and 22% respectively, compared to findings of the 1Q 2017 edition.

Westwood now estimates an order backlog of $45 billion and installation expenditure of $57 billion between 2017 and 2021. This is due to increased confidence in the market and lower field development costs.

To date this year 10 floaters have entered service, including high-capex units ordered prior to the downturn such as theP-66 and Armada Olombendo.

Eleven floating production systems have been ordered this year, headed by theLiza and Sépia FPSOs and the Mad Dog Phase 2 semisubmersible.

Latin America will remain dominant in the sector, Westwood believes, accounting for 32% of capex and 36% of installations. Much of this will be directed at Petrobras’ fields in water depths of up to 1,000 m (3,280 ft), for units ordered in 2010 and which are still to be installed.

However, installation expenditure will be more than $5 billion across Africa, Asia, North America, and Western Europe.