With first oil from Kashagan, new gas developments at Shah Deniz, and moves to improve infrastructure with the opening of a shipyard at Baku in Azerbaijan, the Caspian Sea is moving from promise to fulfillment. 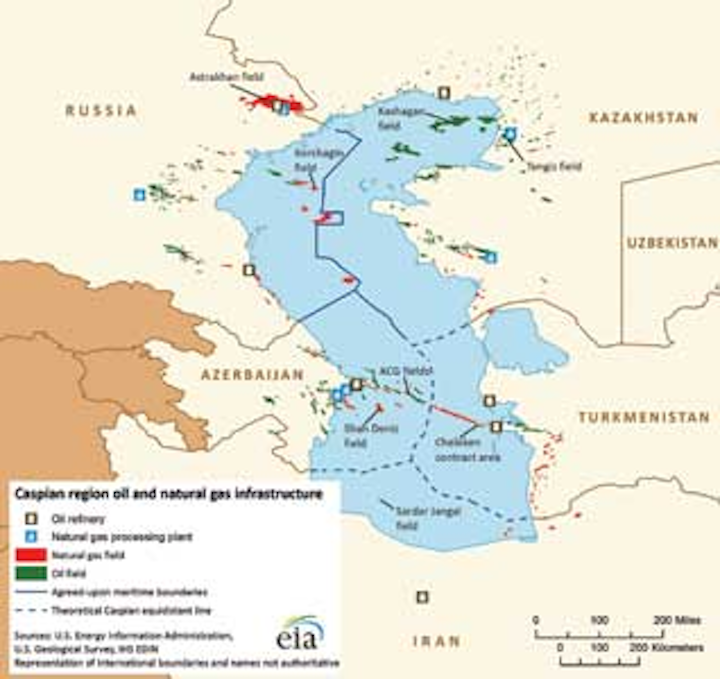 One key to the future is the settlement of international boundaries

With first oil from Kashagan, new gas developments at Shah Deniz, and moves to improve infrastructure with the opening of a shipyard at Baku in Azerbaijan, the Caspian Sea is moving from promise to fulfillment.

Kashagan is 80 km (49.7 mi) southeast of Atyrau and is the largest oil prospect in the northern Caspian, with estimated oil in place of 35 Bbbl. Future developments could increase these volumes.

Because of the ultra-shallow ice-prone waters, and high reservoir pressure of 770 bar (11,168 psi), the start-up involved staged sequences of steps. Oil and gas flow from eight wells drilled to a depth of 4,200 m (13,779 ft) from sea level off a man-made island. Production is scheduled to ramp up to include 20 wells delivering 180,000 b/d under Phase 1. Second-phase gas re-injection is expected to jump production to 370,000 b/d.

At Shah Deniz, the consortium signed sales agreements covering more than 10 bcm/yr (353 bcf/yr) of gas from Stage 2 of the field development in the Azeri sector. Stage 2 will include construction of two new bridge-linked production platforms 70 km (43.4 mi) offshore; 26 subsea wells drilled by two semisubmersible rigs; and 500 km (310 mi) of subsea pipelines in up to 550 m (1,804 ft) of water. In total, Shah Deniz will deliver 16 bcm/yr (565 bcf/yr) through more than 3,500 km (2,175 mi) of pipelines across Azerbaijan, Georgia, Turkey, Greece, Bulgaria, Albania, and the Adriatic Sea to Italy.

The gas sales agreements will enter into force following the final investment decision on the Shah Deniz Stage 2 project, expected late this year.

The Baku Shipyard of Keppel Offshore & Marine, SOCAR, and Azerbaijan Investment Co. opened this past September. The 62-ha (153-acre) shipyard is designed to build subsea vessels, anchor handling tug/supply vessels, and multi-purpose offshore support ships, as well as tankers and cargo vessels. It also has ship repair and conversion capabilities.

Keppel has a 10% share and is responsible for management and operation in the new yard, while SOCAR and AIC own the remaining 65% and 25%, respectively.

Phase 1 development called for a $470-million investment. At full capacity, the yard could perform up to 100 repairs and conversions each year, with average annual steel output of 25,000 tons.

Phase 2 plans include the construction of a graving dock with further facilities for offshore projects.

The yard has two contracts with a combined value of $50 million. One is for construction of a 50-metric ton (55-ton) bollard pull azimuth stern drive tug, and the other is for a set of pontoons for a semisubmersible.

Another part of the Caspian seeing activity is Lukoil's Vladimir Filanovsky field in the Russian sector. Stage 2 development contracts are held by OAO Globalstroy-Engineering for engineering documentation, purchase of equipment and materials, construction and commissioning, and start-up of a second ice-resistant stationary platform.

The IRP-2 drilling complex will be used to drill 15 directional wells with horizontal borehole completions, comprising nine production wells and six injectors. The platform will connect to the first-stage riser block via a 6-km (3.7-mi) multi-phase subsea pipeline. Both complexes are due to be commissioned in fall 2016.

The Astrakhan OAO Krasnye Barrikady shipyard will be responsible for a living quarter module platform (LQP-2) and a connecting bridge to IRP-2. LQP-2 will accommodate 55 people and will include a helicopter pad.

Substructures for ice-resistant stationary platform one (IRP-1) are in transit to the site and will be secured via 16 piles driven 60 m (197 ft) into the seabed. The substructure will be secured via eight 2-m (6.5-ft) diameter pillars. Next step is assembly of the substructures for the central processing platform (CPP), followed next year by installation of the topsides for IRP-1, LQP-1, RB and CPP, and their connecting bridges.

Yards in Astrakhan are building all the Vladimir Filanovsky field facilities. Development drilling should start next year with first oil scheduled for 2015.

Cheleken Contract Area (CCA) work is moving forward, too. Dragon Oil has contracted BKE Shelf Ltd. to lease and manage two LeTourneau S116E jackups on the CCA in the Turkmen sector of the Caspian.

TheNeptune will work for Dragon for nine months, starting on the Dzhygalybeg (Zhdanov) 21 platform. The Mercury should become available in 4Q 2014 and will work for around two years.

Dragon's leased platform-based rig is expected to begin drilling on the Dzheitune (Lam) 22 platform later this fall, and complete one well before year-end. 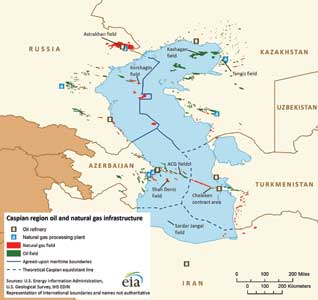 A water injection pilot project started in Dzheitune (Lam) 75 in June, with early indications of positive pressure response in the pilot area. Dragon plans to expand water injection operations to two or three more platforms next year, the aims being to maintain pressure, sustain production rates, and increase reserves recovery.

Also in June, the company installed jet pumps to increase production and enhance recovery in two wells on the Dzheitune (Lam) 13 platform: 13/118 and 13/168. In each case, oil production has risen as a result by 500-700 b/d. Another jet pump will likely be installed in a third well on the same platform, with plans to expand jet pumps operations to other platforms during 2014.

A lot of oil and gas is at stake in the decision on whether Caspian waters are a "sea" or a "lake" (see box accompanying this article).

The US Energy Information Agency (EIA) estimates 48 Bbbl of oil and 292 tcf of natural gas in proved and probable reserves in the Caspian basins, which include some onshore areas. Almost 75% of the oil and 67% of the gas reserves are within 100 mi (160 km) of the coast. 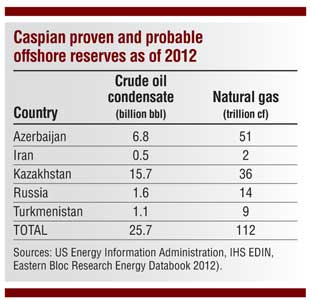 The Caspian may contain additional hydrocarbons in unexplored or underdeveloped areas. The US Geological Survey (USGS) assessed the Caspian basins region reserves at a mean of about 20 Bbbl of crude oil and 243 tcf of natural gas in technically recoverable, conventional undiscovered resources.

USGS estimate has 65% of the undiscovered oil and 81% of the natural gas to be in the South Caspian basin near Iran and Turkmenistan. The arctic-like north of the Caspian Sea is also relatively unexplored, and USGS estimates significant amounts of undiscovered resources there as well.

EIA estimates that the Caspian basin produced an average of 2.6 MMb/d of crude oil and lease condensate in 2012, and about 35% of that came from offshore. As Azerbaijan developed the Azeri-Chirag-Guneshli (ACG) field group between 2006 and 2008, the country's offshore production began accounting for an increasing part of total Caspian production.

Iran: Currently, there is no significant Iranian production in the Caspian. Iran claims 100 MMbbl in oil reserves from a field discovered in 2011 named Sardar Jangal. The Iranian Oil Ministry has said it plans to establish a refinery on the Caspian coast and supply it with crude oil derived from the Sardar Jangal, but no action has been taken to date.

Kazakhstan: The largest current source of oil production in Kazakhstan is the Tengiz oil field, discovered in 1979 off the northeastern shore. The TengizChevroil (TCO) consortium operates the field.

The greatest potential for oil production growth in Kazakhstan comes from the Kashagan field, the biggest oil discovery in the last 35 years. EIA says Kashagan is the largest oil field outside the Middle East.

Development of the Kashagan field has experienced delays and cost overruns. In 2007, the consortium delayed the estimated time for first oil production to 2010, five years later than original schedule. The consortium estimated that about $30 billion has been spent on the first phase of the field's development.

Russia: In 2010, Russia's Lukoil started production of the Yuri Korchagin field, its first offshore field in the Caspian. Crude output goes to the Makhachkala port in Dagestan to be shipped to the Black Sea port of Novorossiysk via pipeline. Transneft announced plans to expand the Baku-Tikhoretsk pipeline to accommodate increased Russian output from the Caspian to Novorossiysk.

Turkmenistan and Uzbekistan: Most of Turkmenistan's oil reserves are offshore or in the Garashyzlyk area. Turkmenistan's government has been developing the offshore Cheleken project since the mid-1990s, which it has opened up to some foreign investment, including UAE's Dragon Oil. Proved and probable reserves in the contract area are around 3 MMbbl of oil and 3 tcf of gas, estimates EIA.

Uzbekistan is not a significant oil producer and has few oil prospects within its area of the Caspian basin.

While Azerbaijan and Kazakhstan have most of the Caspian oil resources, there are significant natural gas resources in all the region's countries. The biggest offshore gas field is in Azerbaijan.

Kazakhstan and Russia: Although Russia is one of the world's largest natural gas producers, very little of that comes from the Caspian. Lukoil considers the northern Caspian region as a key to increased oil and natural gas production in the medium term, particularly from the Filanovsky field.

Is the Caspian a sea or lake?

One key toward understanding the region is to recognize the multi-national spread of players following the dissolution of the Soviet Union. That dissolution made the legal status of the offshore areas subject to disagreement.

The legal status of the Caspian is complicated due to lack of agreement on whether the body of water is defined as a "sea" or "lake." It makes a difference because different international laws regarding country boundaries would apply in either case. Currently, there is no legal definition for the Caspian because the coastal states must unanimously agree on a definition, and they do not.

If the Caspian is a "sea" the United Nations Convention on Law of the Sea would have each littoral state receive a territorial sea up to 12 nautical miles, an exclusive economic zone (EEZ) up to nautical 200 miles, and a continental shelf. Since the Caspian at its widest is less than 200 mi (322 km), UNCLOS would have the states apply a median line between claimants. In this event, Turkmenistan and Azerbaijan, for instance, would have exclusive access to offshore assets that are not open to Iran. If the Caspian is a "lake," international agreements of border states regulate the use of border water. Iran's government has petitioned for equal division by giving each country 20% of the seafloor and surface of the Caspian.

As a result of the lack of clear Caspian Sea delineation, several countries dispute ownership over certain offshore resources. For example, Azerbaijan and Turkmenistan both claim the Serdar (Turkmenistan)/Kyapaz (Azerbaijan) field, originally discovered in 1959 by Azerbaijani geologists.