This month, Infield Systems provides a brief global overview of offshore field developments up to 2019.

This month, Infield Systems provides a brief global overview of offshore field developments up to 2019. Asia is likely to see the largest number of offshore field developments, with the Southeast Asian sub-region continuing to be a major driver of activity. Key countries driving activity in the sub-region include Malaysia and Indonesia, which together are projected to account for 44% of Asia's offshore field capex demand between 2015 and 2019. Although Asia is anticipated to see the highest number of developments, Latin America is expected to have the largest offshore capex demand (24%), predominantly due to developments in Brazil. A large portion of the country's developments likely to be developed over the forecast are situated in deep and ultra-deepwaters which are costly environments to develop in contrast with the relatively lower costs associated with the predominantly shallow-water developments in Asia. Africa could see its share of offshore capex demand to increase to 20% over the next five years, mainly associated with developments in West Africa, with East Africa expected to emerge as an important future sub-region. 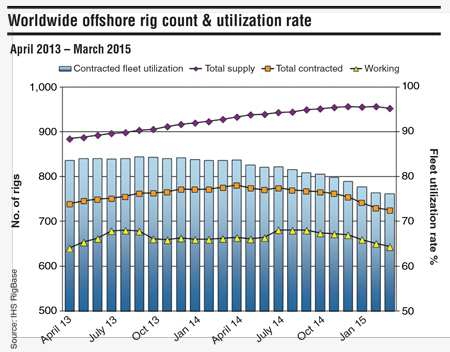 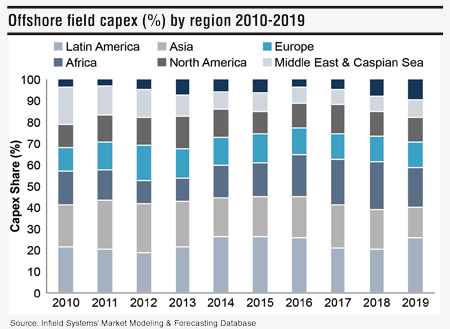 Europe and Asia are likely to see the largest share of fields enter production (26% each) during the time-frame. The mainstay of offshore field developments in Europe will continue to be located in the northwest, with 51% of the fields forecast to enter production being located offshore the UK. In North America, the US Gulf of Mexico (US GoM) is set to dominate both capex demand (90%) and the number of fields likely to enter production (68%). The largest number of developments expected to require investment in the US GoM are likely to be situated in water depths greater than 1,499 m/4,918 ft (40%). Australasia and the Middle East are likely to see the lowest number of fields come onstream over the period. Fields located off Australia's northwest coast will, however, be the mainstay of activity in Australasia, some of which will be tied back to onshore LNG export facilities, which have increased in number over recent years due to the country's ambition to become a major exporter of LNG.