Offshore developments occur in a variety of water depths and environments and present a variety of subsurface conditions. The ability to understand the relationships between these requirements and the different types of systems is key to successful development. In part two of this series, Gulf of Mexico deepwater floater oil and gas processing capacity statistics are reviewed. 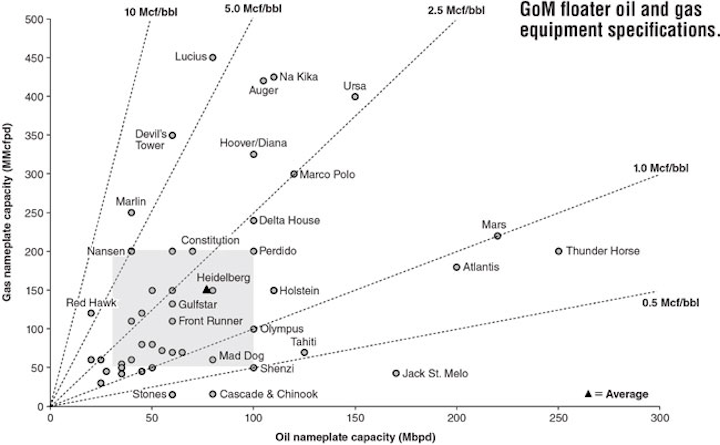 Offshore developments occur in a variety of water depths and environments and present a variety of subsurface conditions. The ability to understand the relationships between these requirements and the different types of systems is key to successful development.

In part two of this series, Gulf of Mexico deepwater floater oil and gas processing capacity statistics are reviewed.

Well production arrives topsides at different pressures, temperatures, flow rates, and compositions, and must be separated in their component streams and satisfy export pipeline specifications.

In the deepwater GoM, stabilized spec crude and dehydrated, nonhydrocarbon dewpointed sales gas are the most common processing specifications.

Topsides includes all the equipment to separate, treat, dehydrate, and prepare production for export; to treat the produced water; compress the gas for treating and export; and to provide metering for custody transfer of oil and gas. Utilities and storage are additional system elements. In some cases, water injection and gas injection systems are required. 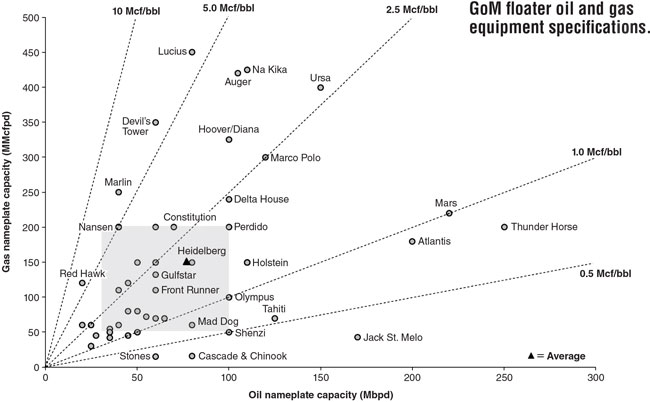 Trade-offs are often fuzzy and include differences that arise from:

The primary export options are defined according to the degree of oil and gas processing performed and whether facilities produce stabilized spec crude and dehydrated gas or unstabilized wet crude and sales gas.

Equipment capacity is normally designed for processing requirements to match the development (right-sized), but in some cases may be built with extra capacity in anticipation of future tieback opportunities (over-sized) when owned by a third party, or under-sized in special circumstances.

The installed nameplate oil and gas capacity for all floaters (except Independence Hub) is depicted in the below chart, and lines of constant slope gas/oil ratio G/O = 10, 5, 2.5, 1, 0.5 Mcf/bbl are overlaid. G/O ratio is similar to producing gas-oil ratio and reflects reservoir conditions and development strategy.

Groupings observed along vertical and horizontal lines are due to standardized well and equipment designs. Most GoM floater equipment capacity falls in the G/O slice between 1 and 2.5 Mcf/bbl, indicating the mostly liquid and heavy nature of deepwater reservoirs discovered to date, and all intervals are populated.

Independence Hub is the only dry gas floater development and with gas processing capacity of 1 bcf/d and 5,000 b/d condensate capacity would plot in the top left off the chart.

Semis have the largest average processing capacity and also the largest variation among structure type, reflecting their application in both small and large field developments.

At the time of sanction/development, the production equipment and export pipelines are sized relative to the well plan and expected maximum flow rates and provides a useful benchmark on development strategy when compared to a field’s total production.

Capacity-to-Reserves (CR) ratio is defined as the oil and gas production handling capacity expressed in heat-equivalent barrels on an annual basis to total expected production expressed in boe.

Over time, nearby fields may be tied back and require processing capacity to be increased or the field may not produce as expected. In either case, the CR ratio will change, either increasing, or more likely, decreasing because of the expected direction in reserves growth. 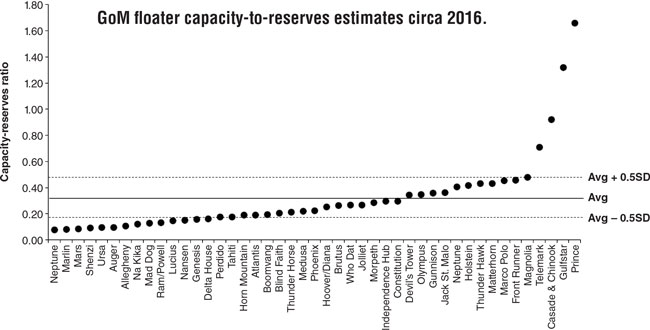 CR is a function of time because both the numerator and denominator are functions of time. Equipment capacity is not directly observed unless reported by the operator, and subsequent changes may or may not be reported, so caution is warranted in empirical evaluations. Proved reserves are an estimate that changes over time and total reserves includes cumulative production plus proved reserves at the time of evaluation.

Equipment capacity does not include water handling, water injection or gas injection capacity.

A few examples of changing field conditions are:

CR ratios have a tendency to decline due to reserves growth and tieback fields that add production to the structure. If tiebacks occur when the structure is at peak production, capacity will need to be added, while if the tieback occurs during the decline stage, then capacity additions will be more limited or not needed.

The four outliers at the high-end include:

Heidelberg was the only floater excluded because its four wells have only recently started producing and reserves estimates could not be reliably computed.