Beginning in 1986, with the Placid Oil GC 29 development using a converted drilling semisubmersible in 1,500 ft of water, the Gulf of Mexico has been the incubator of deepwater floating production system innovation. 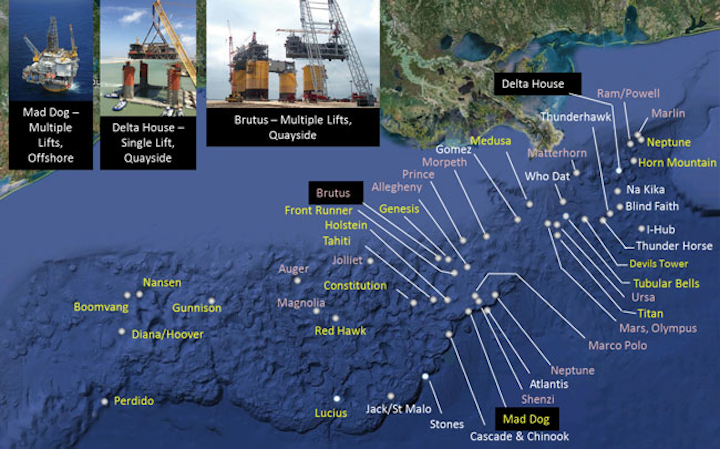 Beginning in 1986, with the Placid Oil GC 29 development using a converted drilling semisubmersible in 1,500 ft of water, the Gulf of Mexico (GoM) has been the incubator of deepwater floating production system (FPS) innovation.

In the following 30 years, over 50 FPSs have been sanctioned. The have included tension leg platforms (TLPs), spar platforms (spars) and semisubmersible platforms (semisubs). Deepwater frontiers have been extended to over 9,000 ft in that timespan, while managing and overcoming many technical and commercial challenges. In the wake of the recent collapse in oil and gas prices, the industry is confronting perhaps its most formidable challenge in developing new deepwater fields in the GoM that require a host facility.

In the past, all too frequent project execution cost and schedule overruns were masked by rising or high oil prices. In many instances, the topsides to hull integration, platform installation and hook-up to mooring and riser systems and commissioning (the integration and installation phase) have been the root cause of overruns since they are high-risk, high-consequence activities. In the current low oil price environment, there is little margin for error for integration and installation (I&I) miscues. These types of miscues can rapidly erode project value.

The authors have reviewed the critical I&I phases and performance of 33 TLP, spar and semisub platforms in the GoM, and substantiated the review based on either first-hand experience or discussion of lessons learned with respective project leaderships. The objective is to provide performance benchmarks, observations, and recommendations for future FPS developments in the GoM to help avoid repetition of costly missteps and delays, and incorporate lessons from those projects that have been executed well.

The research examined 53 FPSs by type and year of sanction versus water depth. The two decommissioned converted semisubsPlacid Oiland Ensearchwere omitted. These developments occurred in three tranches with gaps between them.

Eleven platforms were sanctioned in the first tranche (1985-1997) which was dominated by TLPs, both “conventional” and “new generation,” with the distinction being that conventional TLP topsides are integrated quayside, whereas new generation TLP (and all spar) topsides are integrated at the offshore host location. The first three “classic” spar projects were introduced in this period. All of these platforms had dry trees with full drilling or workover rigs. Water depths progressed from 1,700 ft (Jolliet TLWP) to 4,800 ft (Hoover spar).

Between 1997-2000, there was a gap where only one TLP was sanctioned. The paucity of sanctions is attributable to the wave of mergers and acquisitions that occurred in the industry following a short but dramatic dip in oil prices during the Asian financial crisis.

The floodgates opened in the second tranche (2000-2007) with 30 projects sanctioned (14 spars, 7 semisubs, 7 TLPs, and 2 shipshape FPSOs). Out of these, 17 projects were sanctioned in the first three years (2000-2002) when WTI oil price averaged $25/bbl. It marked the introduction of large newbuild semisubs and the widespread acceptance and adoption of wet tree developments. Host water depths reached 8,200 ft.

There was another gap when no projects were sanctioned during the 2007-2009 period, in large part due to the aftermath of hurricanes Katrina and Rita and the collapse in oil prices following the global financial meltdown, which was thankfully short-lived.

Following the recent plunge in oil price from mid-2014, just one project was sanctioned in 2015. If the oil price stays lower for longer, as many operators anticipate, there will be little room for error in executing those projects that do get sanctioned. This gap is a blessing in disguise, since it provides the breathing room to incorporate such lessons learned and have a first mover advantage for the next tranche.

The research examined the number and type of the 53 FPSs sanctioned by operator. Four operators account for 60% of these FPSs (Shell and Anadarko at 20% each, BP and Chevron at 10% each). The remaining 40% are distributed among 12 operators that have installed between one and three platforms. Various contracting strategies for project execution and delivery have been employed. In general, execution for the large and complex platforms (topsides operating weight exceeding 12,000 metric tons, or 13,227 tons) have been segmented, with reimbursable engineering, fabrication at negotiated rates with lump-sum components and reimbursable integration, installation, and commissioning. The operator provides project management, assurance, and procurement of critical equipment. For medium-to-small platforms (topsides operating weight less than 12,000 metric tons), contracting strategies run the gamut from those above to lump-sum turnkey EPCI and lease operate and production handling agreements with third parties who are responsible for execution and operation.

The cycle time from project sanction to first oil is divided into three phases: detail engineering and fabrication; topsides to hull integration and pre-commissioning; FPS installation (towout, mooring hookup, riser pull-in and hydrotest, final commissioning). For this analysis, the authors have assumed that the I&I phases begin at the time the hull arrives at a GoM integration or marshaling site. With some exceptions, all hulls are fabricated and pre-commissioned overseas and dry towed to the GoM.

For conventional TLPs and semisubs, the integration phase is spent quayside at a fabrication yard in the GoM with heavy-lift devices (HLDs) capable of lifting topsides modules ranging from 4,000 tons to 10,000 tons (3,629 metric tons to 9,071 metric tons), onto the hull columns. Topsides modules are generally fabricated at GoM fabrication yards in Louisiana and Texas. Upon completion, the integrated hull and topsides is wet-towed to the development site and connected to pre-installed moorings. Production and export risers and umbilicals are then hooked-up and tested followed by final commissioning, and subsea wells activated to achieve first oil. Heavy-lift crane vessels are usually required for hooking up the risers and installing mooring foundations.

For spars, the I&I phase begins when the spar hull is dry towed, offloaded, and secured at a suitable GoM quay. There is generally a lag between hull arrival and completion of topsides modules fabricated in the GoM. This time is usually devoted to hull outfitting completion. The hull is then towed to the development site, upended, fixed ballast installed, preset mooring hooked-up and topsides modules floated out on material barges and set.

With today’s high capacity semisubmersible dynamic positioned heavy-lift crane vessels (Thialf, Hermod, Balder, S-7000), topsides can be set in one to four major lifts (up to 10,000 tons) in most metocean conditions in the GoM. Weather windows for installation and integration are much narrower for less capable heavy- lift vessels. Production, export, and umbilical risers are then pulled in and tested. Buoyancy can-supported top-tensioned risers (which have been replaced by long stroke hydro-pneumatic tensioners on recent spars) require heavy-lift vessel support for installation. Several smaller secondary lifts are also required to complete the topsides installation. For large topsides in more remote sites, accommodation vessels are needed for the extended period of integration and commissioning. For dry tree facilities (spars and TLPs), first oil follows well completion and commissioning.

The cycle time for the three phases of the execution from sanction to first oil for 33 medium and large FPSs were extensively researched, and the data presented in the form of bar graphs for each platform type and category. The bars are arranged chronologically to see if market conditions were a factor. Additionally, information such as the number of major lifts and topsides operating weights are also shown, as these are key drivers of the I&I schedule. The presentation of the data in this form enabled several pertinent observations to be made. A few outliers such as the Auger TLP and Thunderhorse semisub were excluded to prevent skewing of the observation, since they were one-off and are unlikely to be repeated.

The projects listed in the “best in class cycle times” table are the gold standard for project execution in their respective classes. The authors recommend that the reasons for success be carefully studied and replicated as much as possible. A major reason is repeatability, discussed next.

The case for repeatability

Anadarko and Shell have set the standard for project execution cycle times for medium spars and large TLPs, respectively, by employing a strategy of standardization and repetition. The mean cycle times from sanction to first oil and I&I for four Anadarko truss spars (Nansen, Boomvang, Gunnison, and Constitution) are 24 months and 6 months, respectively. The corresponding durations for the four large conventional TLPs by Shell (Mars, Ram Powell, Ursa, Brutus) are 30 months and 8 months. The foundation of their success is the competence, capability and continuity of:

A necessary condition for repeatability is a steady pipeline of projects with similar basis of design.

The causes of significant delays for some of the GOM FPSs can be seen in the associated table.

The integration and installation phases of a deepwater GoM FPS project are high-risk, high-consequence activities. There is little schedule float, and there are many opportunities for schedule slippage, with few chances for recovery. These slippages invariably result in significant cost and schedule overruns, which can significantly erode a project’s commercial performance. With the current forecast of persistent low oil prices, such overruns cannot be tolerated.

In addition to an overview herein, the authors have examined the I&I performance of these 33 medium and large GoM FPSs and collated the information to provide benchmarks and observations. These metrics can enable operators to select execution plans that will yield the greatest success, and help avoid the type of pitfalls that could result in a busted project.