Recently ABB completed the second of two power-from-shore projects over the past decade at Statoil's Troll field in the North Sea, 70 km (43 mi) from Kollsnes, western Norway. 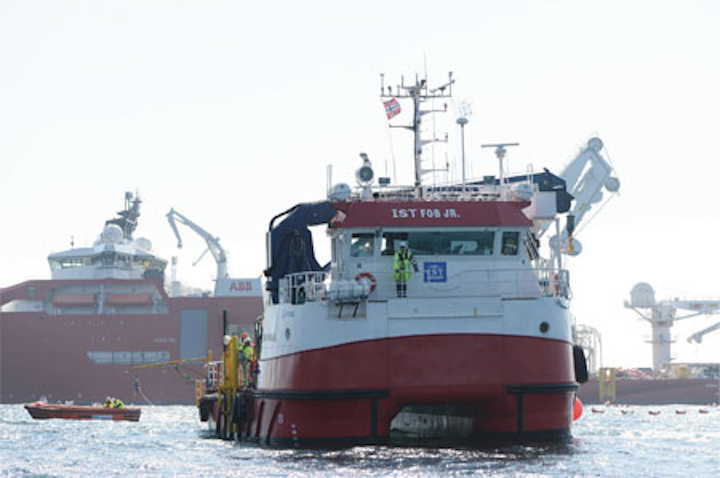 Recently ABB completed the second of two power-from-shore projects over the past decade at Statoil’s Troll field in the North Sea, 70 km (43 mi) from Kollsnes, western Norway. Troll is an immense reservoir, 750 sq km (289 sq mi) in area, and the most important gas field on the Norwegian continental shelf. It contains around 40% of the country’s gas reserves and the facilities are designed to produce up to 120 MMcm/d. It is also important as a source for oil - roughly 1.5 Bbbl have been produced since the field came onstream in 1995.

Production comes through three platforms, Troll A, B, and C. Troll B is the world’s only semisubmersible concrete platform while Troll A is the largest, weighing 656,000 tons and with a height of 472 m (1,548 ft).

Unusually, Troll A was never intended to generate its own power; rather, it was designed to accept AC power from shore. However, although this solution secured the energy needs of the platform when it began operating in 1995, it was not sufficient to run the four compressors that were added 10 and 20 years later. These modules are also very large, each weighing 3,000 tons and with a combined energy requirement of about 200 MW, enough to power a mid-size city. In addition, each compressor requires its own DC connection. The two sets of facilities, however, should help extend the life of the Troll field to at least 2063.

Troll A’s initial power-from-shore scheme of 2005 was the world’s first for an offshore production complex. To justify the high capital costs, the HVDC link needed to function at a higher level of reliability and efficiency than the alternative of a gas turbine. The successful outcome persuaded Statoil and its partners in 2011 to add compressors three and four to Troll A, using higher-power 50 MW-rated units.

How the system works

One feature of both projects is the simplicity of the circuits and the way they integrate with other ABB equipment, both on the platform and onshore. For each scheme, power is imported from the 132-kV AC grid at the Kollsnes plant, which also processes Troll’s gas. The current is converted to HVDC using high-power, high-voltage electronic semiconductor valves in a voltage-source converter system that ABB has patented as HVDC Light. This is connected to the network using specially designed step-down transformers. The DC current is transmitted to Troll A through two sets of DC cables, along with a three-phase AC cable to handle auxiliary power needs.

When the current arrives on site it is returned to its AC form by a similar solid-state inverter station, after which it is connected to the very high voltage (VHV) motors that drive the compressors. Here the simplicity principle is respected by coupling the motors’ shafts directly to gearboxes that automatically deliver the correct number of revolutions, so that they act as a variable-speed synchronous machine. This means that no transformers are required to step down the voltage, which is delivered at 56 kV (for units one and two) and 60 kV (for three and four).

In 2005, this system was on the cutting edge of power system design, and ABB’s technique for creating a high-voltage DC current using voltage-source converters - HVDC Light - had not previously been employed in an offshore context. HVDC Light is based on voltage source converters (VSCs). For the systems at Troll A, pulse width modulation (PWM) is used to generate the fundamental voltage. The advantage is that voltage magnitude and phase can be controlled freely and almost instantaneously - an important consideration when running this kind of compressor.

The solid-state rectifiers and inverters that handle the current use high-quality semiconductors adapted for this application, based on fast insulated-gate bipolar transistors (IGBTs). This facilitates reactive power compensation and harmonic/flicker compensation, leading to improved quality of the current and therefore a reduced need for passive filters - in turn minimizing weight and space requirements on the platform. That is also a key benefit compared with “classic” HVDC. Operation of the converters was successfully handled by ABB’s MACH 2 software, developed specifically to control HVDC Light systems. Although an inverter station the size of a small house was added to Troll A to receive the HVDC, it was light, quiet, had no moving parts, and was remarkably compact in relation to the task it was performing.

Another innovation in an offshore setting was the cable-wound Motorformers - the VHV motors that drive the compressors. The speed of this machinery varies constantly, requiring the motors to move smoothly from zero to flat-out. They also have a “black start” capability, which means that they can boot up after a complete stop without relying on external power sources. As with the inverter, the Motorformers were larger than conventional units, but because they dispensed with the auxiliary transformers, not to mention insulating oils, switchgear and surge arrestors, they actually reduced weight and saved space on deck.

The amount of gas compressed is more or less proportional to the shaft power of the motors that power the compressors. As compressors three and four were more powerful than the earlier ones (50 MW compared with 44 MW), the design of the machines’ stators had to be optimized. This was achieved by increasing the length of the motors and changing their cooling system, based on experience from the operation phase of the first two systems.

Another goal was to make the new systems as similar as possible to the two existing ones. The rationale was to stick as closely as possible to a proven solution, decreasing risk in the installation and operational phases. At the same time, ABB had to take account of the 10 years of technology evolution that separated the two schemes. For example, the control system hardware for the HVDC Light links had been comprehensively upgraded, necessitating careful verification of integration and compatibility of the control software during the test phase for last year’s project.

Furthermore, the company had changed its concept for delivering HVDC Light from a containerized to a modular approach. This meant that a bespoke rectifier station had to be erected inside the “explosion zone” at Kollsnes, which imposed very high tolerances on the design and execution of that element of the scheme. Finally, the addition of module three and four increased the load on the original AC supply, which was no longer sufficient to power Troll A. So a new AC connection was included in the project, with the added benefit of increasing redundancy in the power supply.

For the installation and commissioning of the compressor sets it was necessary to avoid disturbing normal operations on the platform. It was not possible to factory-test the complete electrical drive systems - including the HVDC Light converters and the Motorformer - as the cost and time involved in setting up the test system would have been too high.

Instead, individual components were tested at the factory in Ludvika, Sweden, where the HDVC control equipment was fabricated, and which had the capability to simulate the main circuits of a complete system. The program established the ability of the power link to “ride through” onshore disturbances to grid power, for example during heavy snowfall (not uncommon during a Norwegian winter). At the same time, it was possible to verify that the MACH 2 control software was functioning as designed and that it could control a 60-kV synchronous motor.

As for the offshore part of the system, the main electrical equipment, including the controls, IGBT valve cooling, and auxiliary power systems, was fitted into the module, which has the appearance of a giant metal shed. When the modules were installed offshore and hooked up to the subsea cables, a series of tests followed to ensure that the cable had been installed without damage, to verify the functionality, and to confirm that the systems could be operated safely.

Thanks to these preparations, when the time came to test the fully assembled system on the Troll A platform, everything went smoothly. There were issues with the interface that were not foreseeable without having the complete system up and running, but fortunately they proved easy to rectify.

Following a period observing the system in operation the electrical drive system that Statoil and ABB had developed for Troll A behaved according to expectations. Some modifications were introduced following suggestions by personnel that certain control functions might be better performed by the platform’s own systems.

HVDC Light is based on voltage source convert topology and can both generate and consume reactive power. To support Norway’s national grid, the rectifiers at Kollsnes now produce reactive power and an adaptive control philosophy has been introduced that controls the reactive power production during voltage fluctuations. Importantly, daily operations and maintenance activities have not raised any notable issues. The Motorformers have performed according to the factory acceptance tests and their vibration level is lower than predicted.

The general conclusion is that a technology that was novel back in 2005 has now achieved a level of maturity and will provide a good base on which to build in the future. This year ABB is due to fulfil a $170-million contract to install a 55 MW, 162-km (100-mi) AC power cable from the Norwegian mainland to Total’s Martin Linge field development in the North Sea. Last year, Statoil awarded ABB a $90-million contract to deliver a 100 MW, 200-km (124-mi) cable for the Johan Sverdrup project in the same sector.

ABB has consolidated its presence in this emerging market. It is introducing 525 kV PEX insulated subsea cables and hybrid HVDC breakers to enable a future HVDC network. The company has also commissioned its own cable-lay vessel, due to be delivered in 2017. This will feature numerous innovations, including state-of-the-art dynamic positioning and ABB-integrated automation.

The expectation among some of the industry’s leading operators is that power from shore will be a kind of enabling technology that supports a more radical shift in methodology, possibly to subsea factories that are powered and controlled remotely.

Development trends within subsea electrification and power from shore will become clearer in the coming years. Although the currently depressed market situation has made the time frame uncertain, power will have an impact on the oil and gas industry’s contribution to climate change, at least on the Norwegian continental shelf. The petroleum industry in Norway accounts for about 25% of the country’s carbon dioxide emissions - about 13 million tons. Replacing single-cycle offshore gas turbines that operate with 30% efficiency with power from the mainland - 98.5% of which comes from hydroelectric sources - will boost the industry’s public image while at the same time reducing operational costs offshore.