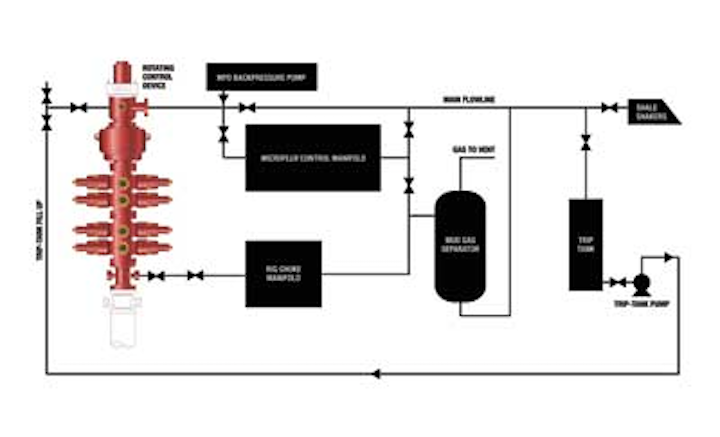 The long-producingUS Gulf of Mexico shelf is being revitalized with new technologies, allowing operators to access untapped reserves in mature or depleted fields that would otherwise be unattainable.

Among the methods opening new opportunities in mature fields ismanaged pressure drilling (MPD). In several cases MPD has succeeded in the Gulf of Mexico (GoM) shelf in mature fields depleted by more than 50 years of production. Hydrocarbon production changes geological properties which cause a reduction in formation pressures and, subsequently, a narrow available drilling window subject to wellbore instability. Using conventional methods, such conditions can render a well un-drillable or lead to dangerous and costly well events such as kicks, losses, and wellbore collapse.

MPD can overcome some of the limits of conventional technology to drill through a tight operating window, manage the changing annular pressure profile, reduce the likelihood of a well control event, and manage wellbore stability to mitigate stuck pipe.

In one GoM shelf well, an MPD system enabled a major operator to successfully tap previously unattainable assets in a field brought online in the mid-1960s. Although reservoir pressure had declined in the target sand as well as some shallower sands, recent well pressure profile tests indicated that pockets of untapped hydrocarbons within the formation could enable production for many more years.

The well is in South Timbalier, in less than 200 ft (61 m) water depth, southwest of Grand Isle, Louisiana. A variety of problems in drilling an offset well—reduced fracture gradient, differential sticking, and lost returns—showed it would be difficult if not impossible to drill this well conventionally. The target sand's proximity to salt added to the complications and uncertainties.

MPD in a mature field

The operator determined the best approach to produce from these stranded assets would be to drill a side track from the main wellbore, originally drilled in the year 2000. Pre-drill pressure models indicated the margin between wellbore stability gradient and fracture gradient was too tight to drill conventionally, as depletion in the reservoir had reduced the expected fracture gradient. That led the operator and Weatherford to deploy the Microflux MPD control system. The system is designed to enhance safety and reduce environmental risk and cost when drilling through challenging formations, including mature and depleted fields.

The technology facilitates drilling through multiple abnormal pressure profiles using mud weights closer to pore pressure. It helps ensure constant bottomhole pressure (CBHP) is maintained during connections and trips, and allows for dynamic formation integrity tests (FIT) at any depth while drilling. If swabbing is a concern, the MPD control system also can manage surface backpressure to maintain CBHP when tripping out of the hole.

In MPD, a rotating control device (RCD) is required to close the loop. For safety, the closed-to-the-atmosphere system diverts all of the fluid returns away from the wellbore and through the MPD manifold, while simultaneously providing surface back pressure on the well. A closed-loop system allows the flexibility to manipulate annular pressure as the well dictates and enables drilling in environmentally sensitive and hazardous areas by minimizing the potential for fluid spills.

Microflux has an auto-control feature that restores mass balance and provides faster response times to minimize fluid influxes. The ability to quickly adapt to changing well conditions is critical when drilling with narrow margins. Drilling efficiency is enhanced through dynamic mud weight management and more accurate pore and fracture pressure determination. Economically, the technology enables operators to make cost-effective drilling decisions based on actual surface and well data, rather than predictive models, and also differentiates between kicks/losses and less-critical wellbore issues. It reduces non-productive time by mitigating a variety of drilling hazards, improves rate of penetration (ROP) which minimizes tripping and unnecessary well shut-ins.

Following pre-job planning that included a geological analysis of the target and drilling of offset wells, the operator set a whipstock and deployed the MPD control system from a jackup rig to drill an initial 6½-in. side track from the existing 7-in. liner. Drilling abruptly halted due to an unpredicted fault that caused the well to deviate from the planned trajectory.

The Microflux capability was enabled by key components, including the RCD, installed on the well to contain and divert annular fluids while drilling. For data recovery, the device routes fluid through the control manifold, which has a Coriolis mass flow meter to capture in real time data such as mass flow and volume flow rates, fluid density, and temperature of the returning annular fluids.

The data is routed to the intelligent control unit (ICU), an independent SCADA control system that measures and analyzes physical properties, reacting to well control events, and distinguishing between ballooning/breathing and more serious fluid influxes or losses. The ICU sends data to the operator and redundant interfaces and, when in automated mode, controls the drilling chokes to regulate backpressure.

The real-time data from the initial side track revealed that while depletion in the reservoir had reduced the fracture gradient and narrowed the drilling margin, the more serious challenge was hole instability. The data also showed that the mud weight required to control the shales would need to be higher than the offset wells had indicated.

A common condition in many mature GoM shelf fields is that the lower pressure limit of the wellbore is the stability gradient. In a typical well the lower limit is known as the pore pressure and the upper limit is known as the fracture gradient. Drilling fluid density typically is selected to remain within these two limits. If the pumped drilling fluid is too light, the well may begin to flow hydrocarbons from the open formation resulting in an influx. If the pumped drilling fluid is too heavy, it eventually breaks down the formation, resulting in fluid loss.

Hole instability is exacerbated by cyclical stress from making pipe connections in conventional drilling. Normal drilling consists of drillstring rotation and pumping fluid up the annulus creates an added pressure transmitted downhole. This is defined as equivalent circulating density (ECD). When drilling stops to make connections, a loss of bottomhole ECD is observed and the wellbore is relaxed. The continuous shifting of bottomhole pressure can cause wellbore fatigue, especially in unstable shale or ballooning formations. Using the CBHP variant of MPD, surface backpressure is applied during connections to compensate for any ECD lost and to prevent the wellbore from relaxing, thus retaining an intact wellbore.

A successful side track

The second side track kicked off within the existing 6½-in. open-hole section and successfully reached total depth in the target sand. MPD maintained the wellbore pressure profile within the wellbore stability limit and the sand fracture gradient of the depleted sands. Static fluid density remained higher than pore pressure during the operation. The MPD control system also addressed the specific drilling challenges of the well, including hole instability.

Three times during drilling, the MPD control system increased equivalent mud weight to remediate packoffs due to shale instability. The system also was used to place and displace heavy mud during tripping. Due to the higher-than-expected wellbore stability gradient, a key objective of the MPD system was to modify the bottomhole equivalent circulating density (BH ECD) as necessary during drilling. The system maintained 12.8 ppg BH ECD equivalent while drilling at the start of the well, and increased the equivalent mud weight to 13.7 ppg at total depth.

The MPD system enabled the operator to successfully reach the target depth, while mitigating wellbore stability hazards and quickly identifying small downhole losses and packoffs. Such losses and packoffs were mitigated by increasing bottomhole pressure, eliminating the time needed to increase mud weight. There was no serious influx, loss, or ballooning. The system also manipulated bottomhole pressure when zones with higher-than-expected wellbore stability gradients were encountered. Upon reaching total depth, a dynamic FIT was performed to 14 ppg without any losses.

The system's ability to control the annular pressure profile of the well resulted in a safe and efficient operation that enabled the operator to restart production in the mature, seemingly depleted formation. Automatic kick and loss detection helped control risks while drilling through rapidly changing pressures.

The success can be quantified by the months of planning and preparation involved. Both the operator and the drilling contractor underwent extensive MPD training prior to project kickoff. The rig team reviewed MPD procedures and practiced MPD connections before drilling out of the casing shoe. The learning curve for the drill crew built quickly and, as their confidence in MPD knowledge and process familiarity increased, the time required to execute various MPD tasks decreased on the second side track.

Moreover, the success of the operation has created opportunities for application of the MPD in similar mature or depleted wells. The operator is currently using the MPD system elsewhere in the GoM.