Lundin Norway has awarded COSL Drilling Europe a contract to drill one well offshore Norway with the option for a further eight wells. 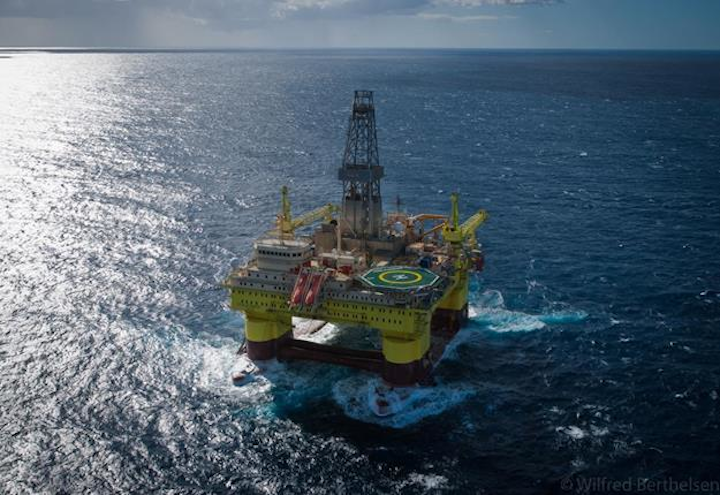 SANDNES, Norway – Lundin Norway has awarded COSL Drilling Europe a contract to drill one well offshore Norway with the option for a further eight wells.

Subject to board approval, the semisubmersibleCOSLInnovator will start the program in March 2018.

In addition, the contractor has a letter of intent from Nexen Petroleum for use of the semisubCOSLPioneer for P&A work at the Ettrick and Blackbird fields in the UK central North Sea.

Both of the sixth-generation DP-3 rigs are currently in warm stack at CCB outside of Bergen, western Norway.

Jorgen Arnesen, CEO of COSL Drilling Europe, said there had been increased demand for modern and more efficient rigs on both the Norwegian continental shelf and the UK offshore sector.

“Last year was actually the first year the majority of contracted units were modern units, and we believe this development to continue,” he added.

In a separate development,Petroleum Safety Authority (PSA) Norway has revoked an order to COSL following an investigation of an accident onboard the COSLInnovatorat the end of 2015.

PSA had stated that the rig’s structural design and dimensioning did not comply with regulations in force at the time of the accident, which led to the death of a crew member.

However, it now confirms that there were no irregularities, having previously ordered the contractor to verify, through appropriate calculations or model tests, that theCOSLInnovator and sister rigs COSLPromoter and COSLPioneer complied with the construction regulations.

PSA based its decision in part on dialogue with the Norwegian Maritime Authority and new information.

COSL Drilling Europe has nevertheless carried out modifications to the rigs, with model tests also conducted at Marintek in Trondheim to verify the changes and calculate the size of the horizontal forces that can occur from waves in the design area for the rigs.

The model tests finished recently and the data is undergoing analysis.