Statoil, in partnership with Eni and Petoro, has made an oil discovery in the Kayak structure in the Barents Sea. 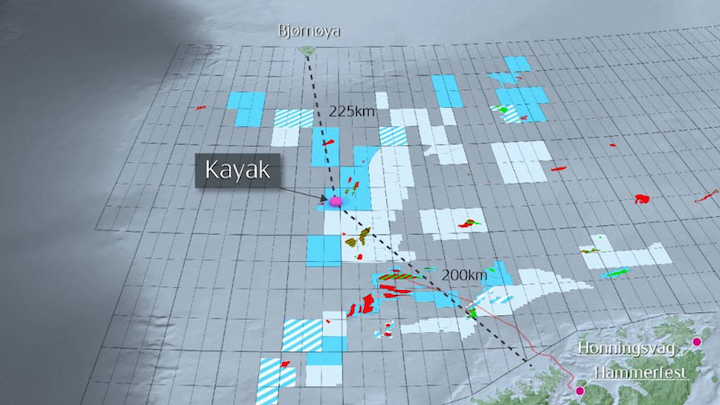 Kayak in the Barents Sea

STAVANGER, Norway – Statoil, in partnership with Eni and Petoro, has made an oil discovery in the Kayak structure in the Barents Sea.

Statoil estimates resources from Kayak in the range of 25-50 MMboe recoverable, and with potential for a tie-in to theJohan Castberg development.

Jez Averty, senior vice president for exploration, Norway and the UK, added that this was a play type that had not previously been explored, opening the way for further opportunities.

According to the Norwegian Petroleum Directorate, the well encountered oil in the upper part of the Early Cretaceous Kolje formation.

“There may be additional resources in this structure,” Averty added, “and we will now analyze the acquired data and consider possible appraisal of the discovery.”

TheSonga Enabler will next mobilize to complete the Blåmann well, followed by drilling of the Gemini North prospect. As all required permits are in place, drilling could start next Monday.

Statoil is also preparing for a three-well exploration drilling campaign in UK waters. The semisubTransocean Spitsbergen will soon spud the first well, Mariner Segment 9, which Statoil hopes will prove additional resources and increase the extent of the Mariner field in the East Shetland basin.

After completing this program, which should take 15-25 days, the rig will transfer south to drill Jock Scott, a prospect on the underexplored margins of the Viking Graben, with drilling likely to take 20-40 days to complete.

It will finish with a well on the Verbier prospect in the Moray Firth area, likely to take 30-70 days to complete.