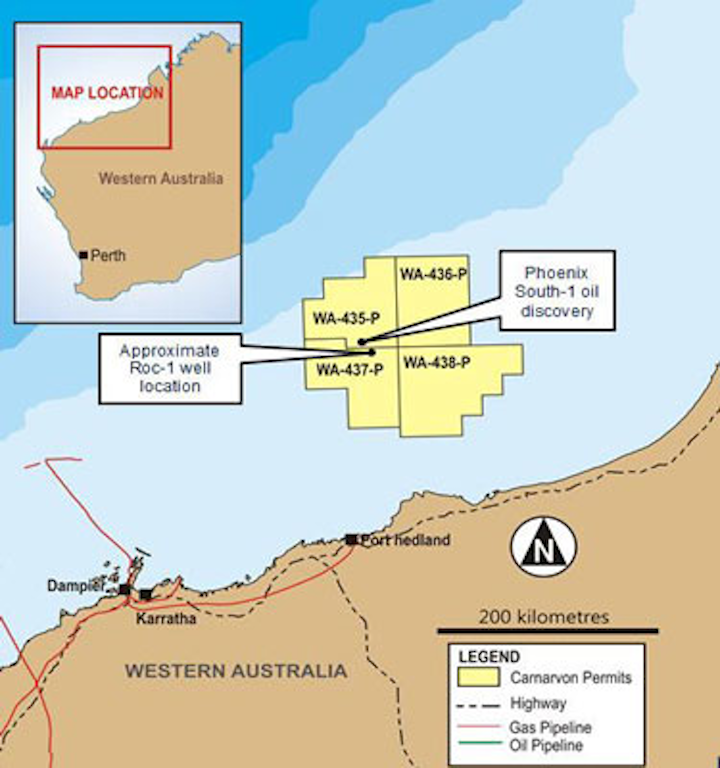 Formation fluid sampling revealed a liquids-rich gas with a condensate ratio of 20-40 bbl/MMcf. This is currently undergoing evaluation at the rig site using downhole instruments.

Inferred permeability in reservoir appears to be in the range from 10 to 100 millidarcy.

Carnarvon’s managing director Adrian Cook said results have confirmed a live hydrocarbon system in the area, with indications at this early stage of evaluation that the condensate-rich gas resides in reservoir capable of being recovered in a conventional manner.

“While the composition of the recovered hydrocarbons will need to be confirmed by laboratory tests,” he added, “it appears the condensate-rich gas is different to thePhoenix South-1 oil that had a high gas content.”

Phoenix South, drilled 20 km (12.4 mi) to the northwest in 2014, was an unexpected oil discovery for previous operator Apache. The present partners have aimed to prove further oil in the play at the Roc prospect.

The hydrocarbons discovered in Roc-1 are interpreted to be in a downdip location on the structure close to the calculated gas-water contact. The partners plan another well at a future date to test the structure’s potential crest, designed specifically for this type of sand.

Equity interest holders in WA-437-P are: