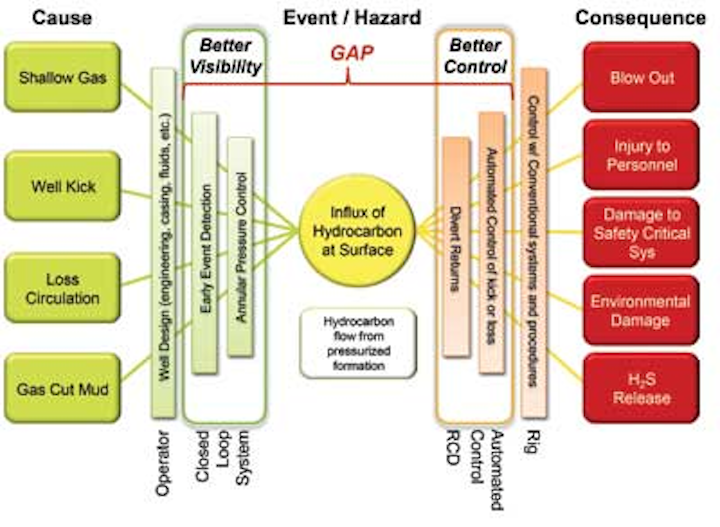 The prior well, which was conventionally drilled, had experienced instability and a kick that led to side tracking, and ultimately plugging and abandonment. In contrast, the offset MPD well reached target depth by mitigating the well control and instability issues that had overwhelmed the earlier well.

The ability to understand and finesse downhole pressure added layers of options to the prevention and mitigation aspects of well control.

In deepwater drilling around the world, well control and pressure-related problems account for significant risks and costs. The success in Ghana reflects a growing application of MPD technology to solve problems in a wide range of deepwater applications. From HP/HT wells in the North Sea to total loss-circulation wells in Indonesia, MPD monitoring and control capabilities are successfully mitigating well control risk and improving drilling economics.

The success with MPD on the Ghana well was preceded by a very difficult time with conventional drilling techniques. Prior experience in the 5,000-ft water depths had challenging conditions that included an inherently unstable rubble zone and sharp pore-pressure, fracture-gradients changes.

When drilling the 12¼-in. hole section, blocky shale cuttings were consistently observed at the surface, indicating changes in wellbore stability and the mechanical stress regime. The primary source of the cuttings was identified as a rubble zone, which led to a raft of troubles that were never fully mitigated.

The well packed off several times while drilling as the shale sloughed around the bottomhole assembly (BHA). At each pack-off event, the BHA was pulled up to a more stable section of the wellbore. Despite the efforts, no progress was made drilling through the rubble zone, and eventually the main wellbore was plugged and side tracked.

Although there had been no indications of high pore pressure in prior drilling, a 16- to 20-bbl influx occurred. The influx led to shutting in the well, which resulted in the hole packing off again and the BHA becoming stuck.

The problems could not be overcome. Ultimately the drillstring was cemented in the hole and the well was permanently plugged and abandoned.

In planning an offset well, these control problems led to the deployment of an MPD system aboard a semisubmersible drilling rig. Using the MPD system for advanced well control enabled drilling of the well to the planned depth without borehole stability issues, underreaming, or contingency liners.

The MPD system was instrumental in identifying and controlling small influxes and losses while drilling the 8½-in. sections of the well. The real-time monitoring and rapid response capabilities mitigated pressure fluctuation before they could escalate into a well control event, and allowed the influx to be safely circulated out of the well.

The application of annular backpressure was instrumental in maintaining wellbore stability while making connections, and avoiding swabbing effects when pulling out of the hole. Difficult to assess in conventional drilling, these conditions are easily identified and mitigated with MPD methods.

In the deepwater application, the ability to quickly manage very small pressure fluctuations also provided a unique ability to mitigate gas breakout in the riser above, and effectively outside the control of the subsea BOP.

With these capabilities, the MPD system provided advanced well control ahead of conventional BOP and mud weight management methods. Accurate detection and control of small influxes reduced risk when drilling through the trouble zone and enabled the well to reach the planned depth.

The MPD system deployed on the semisubmersible included a rotating control device (RCD) atop the riser. The RCD seals around the drill pipe while drilling and tripping, diverting annular flow away from the rig floor. The seal is required to perform over a wide range of pressure with a variety of equipment sizes and operational procedures.

The diversion of annular wellbore flow achieved with the RCD is an immediate benefit to the safety of the rig crew simply because it prevents gas and fluid from exiting the well directly under the rig floor.

A 2010 study determined that an RCD also reduces well control risk. University of Texas at Austin researchers statistically linked RCD use with reducing well control events. They found "consistent statistical evidence, across a variety of regression models and variable specifications, that the use of RCDs decreases the incidence of blowouts."

Control is achieved with an automated choke manifold. By regulating flow, the manifold varies the amount of surface backpressure being applied to the wellbore annulus.

This flow out of the well is measured very precisely using a mass flow meter. The ability to monitor real-time influxes and losses provides an immediate, high-resolution picture of wellbore pressure conditions. Changes in volume as small as a few barrels are easily detected regardless of whether the well is circulating or static, such as making connections.

The result is a powerful well control capability in advance of conventional well control procedures. When an influx occurs, the MPD system can automatically identify it, control it with backpressure, circulate it using the driller's method, and adjust pressures while circulating kill mud. This decreases risk by minimizing total influx size and reduces the probability of additional influxes occurring.

Computerized "fingerprinting" of downhole conditions enables rapid characterization and response to such common problem sources as wellbore breathing that may occur when making connections. This timely identification enables a better-informed response. Mitigation is faster and misdiagnosis is avoided to prevent an escalation to a well control event.

The MPD mitigation capability is achieved without interfering with the rig's blowout preventer and fluid handling system. During MPD operations, conventional BOP and mud systems remain in place and ready for use. Shifting between the two methods is a relatively seamless operation.

On the Ghana semisubmersible, the riser slip joint pressure limit was increased from a maximum rating of 500 psi to 1,000 psi to accommodate the application of backpressure. The increased rating was achieved by removing the inner barrel from the slip joint together with the packer assembly and upper outer barrel. The change allowed application of the required surface backpressure without the risk of over-pressurizing the slip joint or the riser assembly.

Riser gas is a difficult safety challenge unique to deepwater applications that is generally outside the capabilities of conventional well control methods. MPD monitoring and control provides a means of identifying and controlling gas break out in the riser above the BOP.

Riser gas occurs as gas entrained in the return flow breaks out of solution. Industry studies suggest that with oil-based fluids, gas influxes entrained in the return mud flow are unlikely to break out of solution until they rise to a level that is just 2,000 to 3,000 ft below the drill floor. At this point, the influx is above the subsea BOP of a deepwater well, and cannot be mitigated conventionally.

As a result, the conventional practice for dealing with gas in the riser is to vent it using the rig diverter system. But this approach provides minimal control and involves considerable risk.

In a closed-loop system, surface backpressure is applied as easily to the riser as it is the full wellbore. As the gas breaks out, it is quickly detected, controlled, and circulated out of the riser.

Kick simulations were performed to identify the limits of drilling equipment used on the West Africa well. Pressure loadings on the casing shoe, choke line, RCD, riser, and BOP are the main concerns during any well control scenario involving MPD operations. It is important that the pressure needed to safely circulate out through the MPD system is not limited by this equipment.

Transient simulations were conducted using the kick module of Dynamic Well Control software. Although the module is used to simulate different kick situations for conventional drilling, assumptions were made that allowed the software to be used with an MPD system. The model takes into account the dissolution of gas in an oil-based mud.

A well control matrix was developed to provide a clear course of action based on surface pressure and the volume of the influx. The matrix aids fast decision making during critical operations to produce a rapid well control response. The matrix developed for the West Africa well categorizes the different severities of influx and assigns respective operational procedures to address each possible scenario.

The philosophy behind the matrix is described by three limits. The green operating limit is the normal state with no influx and surface backpressure of less than 150 psi. In this category, operations may continue without any other action.

The yellow limit is an influx size up to 5 bbl with a surface backpressure limit of less than 800 psi. In this category, drilling is stopped and the influx is circulated out before resuming operations.

The red limit is when an influx greater than 5 bbl is experienced and backpressure is more than 800 psi. In this scenario, drilling operations must be suspended and the well shut in using the subsea BOP.

A decision tree was prepared to help identify the severity of influx and lead to the correct operational procedure. It is evident that the high intensity of planning and organization of the Ghana MPD project was an important factor in its success.

Drilling deepwater wells often challenges the capabilities of conventional drilling methods. These challenges can lead to failures, greater risk, and expense. The change to a closed-loop circulating system with MPD monitoring and control is overcoming many of these traditional challenges with precise, real-time well control that prevents and mitigates problems before they escalate to a well control event.