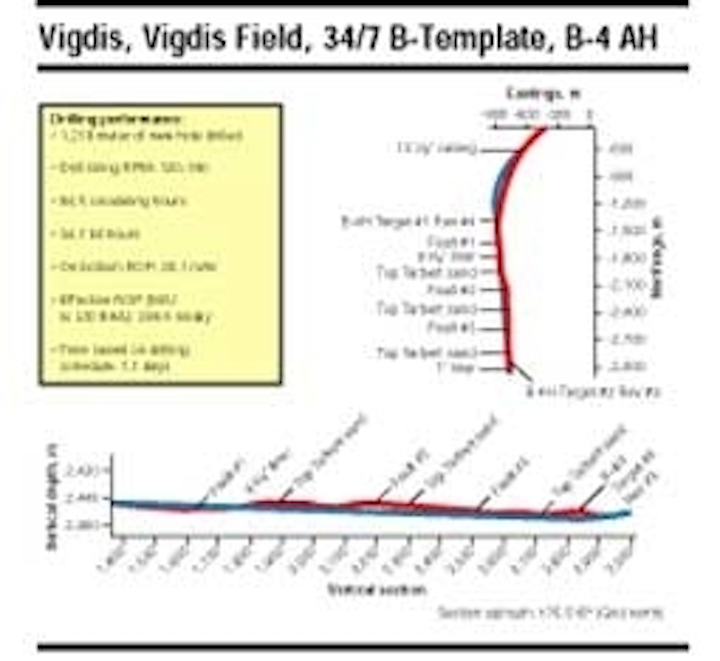 Rising well construction costs are cont-inuing to intensify the focus placed on drilling and logging-while-drilling (LWD) solutions. As a result, geosteering tools and techniques are experiencing a growing popularity among operators worldwide.

These tools and techniques, along with real-time measurements, such as drilling mechanics, downhole pressure, and bit inclination information, are yielding substantial benefits, helping to optimize the well construction process, improve the overall production of the well, and reduce costs.

Sperry-Sun Drilling Services and Security DBS recently completed a string of geo-steered wells off the coast of Norway utilizing Geo-Pilottrademark rotary drilling system. One of those operations, completed at Norsk Hydro's Vigdis Field, included the coordination of a quad-combo LWD string and incorporated the Bi-Modal Acoustic Tool (BAT) and at-bit inclination (ABI) and pressure-while-drilling (PWD) measurements. The quad-combo, which includes resistivity, bulk density/neutron porosity, sonic, and gamma ray measurements, provided the operator with information to evaluate the reservoir's potential and lithology.

Throughout the process, real-time geosteering information, rotary steering techniques, and a specialized polycrystalline diamond compact (PDC) drill bit were used to keep the wellbore in the target reservoir sand and to reach total depth safely with minimal hole problems.

After drilling out the plugs, float equipment, the reamer shoe, and three meters of new formation, the steerable system was used to drill to 3,801 meters measured depth (MD), turning the well up and to the left to re-enter the reservoir. This wellbore trajectory was maintained through the reservoir sand, leveling off horizontally, and slowly turning the well back toward the second target, encountering a fault at 4,118 meters MD.

Drilling continued to 4,551 meters MD, where the LWD and ABI sensors indicated an unexpected fault. The system was then used to help direct the well back down into the reservoir sand. The ABI sensors were then used again to measure the orientation of the hole at 89 degrees after the system's deflection was switched off or set in the "zero" deflection mode.

Drilling in this mode for approximately 24 meters, the ABI showed a gradual increase in the wellbore inclination, which indicated that the drilling assembly had encountered and deflected off of a hard shale layer. Low-side drilling was then continued at 3-4 minutes/hour until the bit drilled through this hard stringer at 4,582 meters. Drill-ing continued at controlled rates (for logging purposes), geosteering up, down, and to the left, toward the final TD of the well at 4,872 meters MD.

The rotary drilling system, in conjunction with the long gauge PDC bit, performed to expectations, drilling an in-gauge, problem-free hole. The PDC bit used a profile and sleeve configuration that resulted in optimal performance, almost completely eliminating hole-cleaning problems over the entire production section of the well.

"We have hardly experienced such effective hole cleaning and hole quality before. There were no problems encountered running and rotating the liner, while cementing," said Norsk Hydro's Drilling Superintendent, Sven-Arve Askedal. "The combination of the drilling system and the long gauge bit seems to be working excellently."

The medium-set matrix body PDC bit used 13-mm cutters for maximum protection and performance. One advantage of the long gauge design was the reduced drilling vibration and the resulting decrease in downhole tool abuse. At the end of the 1,218-meter bit run, the bit showed less than 10% wear.

The combination of accurate ABI and geosteering measurements, optimal drill bit performance, and effective rotary steering techniques allowed the operator's required reservoir objectives to be achieved with minimal downhole problems, while reducing the drilling schedule by seven days. Exceptional LWD log quality was achieved by the continuous rotation of the drillstring. The BAT sonic tool shear wave data resulted in a decision by Norsk Hydro to replace equivalent wireline logs on future wells in this reservoir sand.

When referring to the improvement in directional control while geosteering, Ingolf Soreide, Norsk Hydro, Petroleum Technology Manager, Tordis/Vigdis, stated that "the assembly worked very well, and it was possible to adjust the wellpath in the reservoir section to achieve the objectives of the well."

Incorporating the rotary drilling system with an application-specific drill bit allowed the project team to achieve target plan. At the time of publication, this new system has run in more than 20 applications around the globe.