Expandable reamers have historically been used to improve efficiencies and reduce risk while drilling through problematic formations in deepwater and other offshore wells. 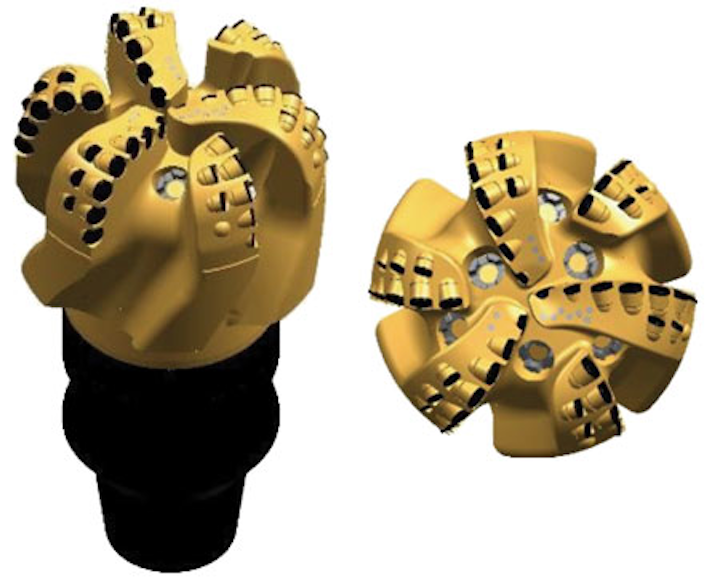 Expandable reamers have historically been used to improve efficiencies and reduce risk while drilling through problematic formations in deepwater and other offshore wells. They are particularly applicable where wellbore stability is a major challenge, and play a significant role in supporting lean-profile well designs.

At first, ball-activated reamers could only be activated once and could not be deactivated until the flow was stopped. An improvement made to these reamers enabled crews to deactivate the reamer while allowing flow thru the tool using a second ball to improve hole cleaning. Concentric reamers enabled larger opening ratios, flexibility in pilot bit selection, high flow rates, better hole cleaning, and the ability to enlarge a previously drilled hole or back reaming with improved reliability.

During this time, operators were always looking for ways to improve insight on reamer condition and operation downhole, in real time. In recent years, Baker Hughes and a customer began to develop an integrated, digital reamer with real-time communication capability through measurement-while-drilling (MWD). The prototype was used exclusively in the Norwegian and UK sectors of the North Sea. It was powered by the MWD turbine and used hydraulic power to activate and deactivate the reamer. Control was achieved by downlinks from surface.

This new reamer added a host of new capabilities to underreaming operations. It can be activated and deactivated as many times as needed. Activation is achieved with a downlink within four minutes and does not require any shoulder testing. Blade status and extension is confirmed using real-time communications through mud-pulse or wired pipe. Real-time visualization of tool data includes enlarged hole diameter thru the measurement of blade extension, pressure, temperature, and tri-axial vibration measurement. This new reamer can also be placed closer to the bit to minimize the rathole down to around 15 ft. The new reamer also operated independently of flow rate, revolutions per minute (RPM) or weight on bit (WOB).

The Harding field is located in the North Sea, about 320 km (~199 mi) northeast of Aberdeen, Scotland. The field contains six heavy oil and gas accumulations reservoired in massive and injected sands of the Balder and Horda formations. The Harding reservoir quality is exceptional with permeability in excess of 10 Darcies.

However, wellbore stability has been a major challenge in the Harding field. Fragile sands and weak shales combine to provide a tight window of 0.7-1 ppg. Sands fracture at approximately 12.5 ppg and shale collapses between 11.5-11.8 ppg.

Mud losses are another challenge on Harding and have been encountered in all hole sections. The grid sands, injected sands, and Balder massive sandstones have had severe mud losses on many wells. Losses varied from low volume to total losses, which in turn led to hole abandonment and side-tracking. Extensive modeling carried out in-house and with the mud supplier identified the need to underream the overburden section of the IS6 well. This was to ensure that the formation fracture gradients were not exceeded, even if the minimum predicted values were encountered during drilling.

Underreaming has been required as standard especially in the overburden and reservoir sections. Through careful mud weight consideration, and the expectation that there would be no significant shale in the reservoir, it was decided that well IS6 would be drilled conventionally without the use of managed pressure drilling.

The pilot hole of the well IS6 was kicked off from the existing 95⁄8-in. casing and drilled to total depth (TD) and partially underreamed. Once the fluid contacts were determined, a cement plug was set across the underreamed ledge, and a side-track was subsequently drilled to place the main bore of the well. The cement plug was also to act as a barrier to isolate the reservoir sands at the IS6 Pilot TD.

The main bore was drilled as an 8½-in. by 97⁄8-in. hole section interval, planned to TD of 11,020 ft MD (measured depth). It was drilled with a minimum mud weight of 11.6 ppg OBM (oil-based mud) with simultaneous underreaming required to reduce equivalent circulating density (ECD), and allow drilling and cementing operations to be conducted within a narrow pressure window between formation fracture and collapse. This hole section was to be cased off down to a planned depth of 10,924 ft MD with a 75⁄8-in. liner. The liner was to be cemented using a light-weight slurry (~12.5 ppg) to avoid formation fracture and losses during cementing operations.

The bit design and aggressiveness of the bit and reamer was analyzed and coordinated to better balance the loads seen while drilling through homogenous formations.

A common misconception in the industry is that matching bits with reamers means having the same cutter sizes on both tools, or following a set of simplistic equations. These assumptions fail to consider some aspects of the drilling process. The bit and the reamer interact with the formation differently and drilling dynamics are consequently different. Even mechanical rock properties may vary. For example, by the time the reamer starts drilling a new formation, some of the inner formation stresses of the said formation may have been released. Typically, the reamer would have a higher aggressiveness than the bit.

Matching bits and reamers is not a simple task, as various complexities come into play with the drilling and underreaming processes. Baker Hughes uses a total system approach, and the entire system (BHA design, reamer, bit, formations, drive mechanisms, etc.) was taken into consideration. The goal was to eliminate or reduce the occurrence of the pilot bit out-drilling the reamer, which may cause damaging vibrations or cutter damage.

The objective of this project was to ensure smooth drilling dynamics throughout the long overburden section while maintaining ECD and acquiring relevant geological data to optimize the placement of the lateral main bore. The intent was to underream to the planned side-track point then close the reamer and continue drilling to TD.

The integrated reamer was run in conjunction with the AutoTrak rotary steerable system (RSS) with an 8½-in., six-bladed PDC bit, properly synchronized to the reamer and formation. When drilling started, a downlink was sent for the reamer to activate and begin reaming the hole. Although not required, a quick test was carried out by drilling several feet with the activated reamer then pulling back circulation, and noting the increasing resistance or hookload when the opened reamer was pulled into fresh formation. Measuring the increased load indicated that the reamer had likely opened.

The reamer’s performance was monitored in real time, visualized on the surface displays. The displays show a combination of downhole measured parameters, which allows a quick evaluation of drilling and underreaming status. Real-time display on surface confirmed that the tool was fully open and activated. Status of the tool and its activation modes were tracked by the operators on surface as well as a team of technical experts in the tool development center in Celle, Germany, via remote monitoring services. When ECD started to gradually increase to critical levels, steps were taken to manage it. These included reducing ROP, flow, and RPM. Mud weight was gradually reduced to acceptable levels by increasing frequency of pumping sweeps, and adjusting fluid rheology. Therefore, it was decided to keep the new integrated underreamer (IUR) activated and open throughout the run to section TD, reaming the full 4,489 ft of the section. The IUR performed well even with overall high dog-legs, and the tool pulled out with an excellent dull grading of 1-1-WT. In the end, the open-close-open function was not needed as it had been originally planned.

The bit-reamer-BHA synchronization resulted in no reported vibrational issues throughout the run, greatly improving the performance of the system, and increasing the reliability and longevity of the drilling system.

Following the first run, the lateral sidetrack BHA included the same components, the on-command reamer and the AutoTrak RSS assembly with the synchronized drill bit. Again, the BHA performed as expected. The reamer delivered reliable hole enlargement and the RSS delivered the well path, meeting the challenging demand for high dog-leg severities. Stick-slip and lateral vibrations were seen intermittently during the run. The plan was to use 2,235 ft of the pilot open-hole section as a part of the main bore.

As the well progressed, approximately 2,000 ft of pilot openhole interval was used in the main bore, as a result of successfully managing the narrow pressure margins. With this method, the crew was able to effectively underream the borehole. The second underreamer assembly drilled 2,165 ft to TD and was pulled out with blades dulled at 1-2-WT. Overall, the integrated on-command reamer run was successful and it fully achieved the objectives without any issues noted. Again, the open-close-open function was not needed.

Reaming in this manner on both the sections allowed the 75⁄8-in. production liner to be run to bottom with relative ease.

The new integrated on-command underreamer selected for reaming the Harding 9/23b-A32Z (IS6) well was successful. It reamed a full-sized enlarged borehole and the liner was run and cemented easily and without incident. The synchronized bit and reamer were successful since vibrations were almost nonexistent on the first run and minor during the second run. This has allowed for improved rate of penetration and improved BHA reliability and longevity, as damage was minimized and energy was better conserved.

On the first run, the reamer blade wear was dull graded as minor at 1-1-WT on a zero to eight severity scale. On the second run, the blade dull grade was also very good at 1-2-WT.

The on-command integrated reamer achieved the objective it set out for, under-reaming the pilot well and lateral well on Harding. During the course of the first run, it recorded its longest run for that size – 4,480 ft under-reaming distance, in 194.6 hr of drilling time with a maximum dog leg severity of 5.07°/100 ft and up to 90° inclination at TD, for the first run. Second run also made the distance of 2,165ft to TD in the lateral hole as planned without vibration dysfunction.

A total distance of 6,645 ft was underreamed on this project using the integrated underreamer. The integrated on-command underreamer succeeded in opening and closing as needed upon instruction from the rig floor via downlinking. •