Thanks to their vast production potential and their prolific presence in major offshore fields throughout the world, subsalt oil and gas plays are simply too big to be ignored. 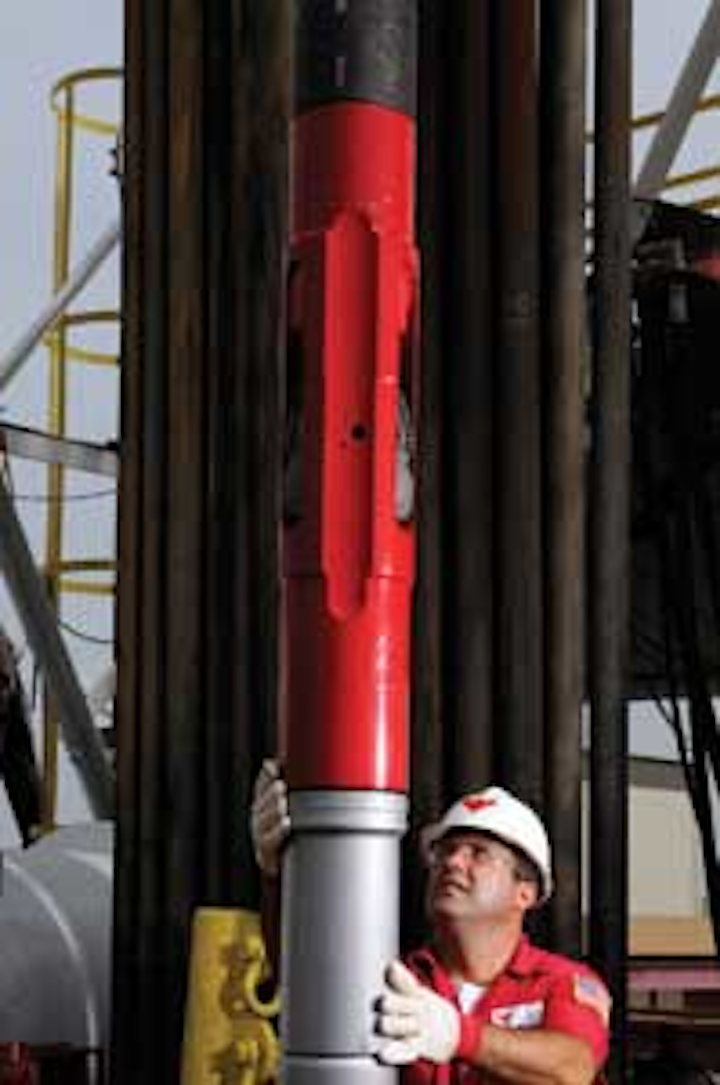 Thanks to their vast production potential and their prolific presence in major offshore fields throughout the world, subsalt oil and gas plays are simply too big to be ignored. But they come with well-known development challenges, including ever-greater well depths in excess of 30,000 ft (9,144 m), well control problems attributed to rapidly changing pressure regimes, and excessive vibrations that wreak havoc with the operation and structural integrity of the bottomhole assembly (BHA). The E&P community has invested a great deal of time, effort, and resources to develop technologies such as more robust drilling tools and higher strength casing strings to make subsalt E&P activities safer and economically worthwhile, but challenges remain.

Particularly vexing to drillers is the tendency for salt to creep or deform, which poses major challenges for keeping a newly drilled wellbore fully open to allow for efficient casing running and cementing operations. The potential for wellbore deformation or collapse due to salt creep is highest during cleanout and hole enlargement operations, which typically require the drillstring to be pulled out of hole, followed by a dedicated trip back downhole with an underreamer tool.

In recent years the industry has embraced the practice of deploying an underreamer tool as part of the drillstring. This tool, which is commonly activated by pumping a radio frequency identification (RFID) tag downhole, enlarges the wellbore diameter during thedrilling operation to make casing running, cementing, and other completion operations easier and more successful. However, in directional drilling applications in which measurement-while-drilling (MWD) tools control the direction of the drill bit via a rotary steerable system (RSS), the underreamer must be placed above the MWD system to allow unfettered communication between the MWD and RSS. As a result, a sizable section of the wellbore—200 ft (61 m) or more—between the MWD tool and the drill bit is not enlarged and remains as a rathole.

To clean out and enlarge more of this lower section of the wellbore and ensure that casing and cementing operations are deployed closer to target depth, Weatherford has developed the RipTide Rathole Killer underreamer.

The novelty of this underreamer lies not in the technology, which is based on the field-proven RipTide reamer, but rather on its position in the BHA. The tool is placed below the MWD system and much closer to the drill bit. Once the bit reaches target depth, the tool is activated to clean out more of the wellbore and shorten the length of the rathole section to only the final 18-20 ft (5.5-6 m) between the underreamer and the bit.

An over-gauged hole with a minimal rathole ensures that the casing can be run much closer to target depth and that a high-quality cement job can be placed around the shoe. This is a particular benefit when working in presalt formations, where the transition from one formation to another with a markedly different geology or structure may cause pressure buildup andwell control problems for an unconsolidated cement job.

The tool replaces ball-drop activation, an option not possible due to the presence of the MWD system between the ball and the underreamer, with flexible pump-cycle activation from the surface. Not only does pump cycling eliminate fixed flow rates for activation and permit operational flexibility with changing wellbore conditions and target flow rates, it also eliminates the need to pump the RFID tag downhole. For drillstrings equipped with turbine-driven MWD systems, RFID tags cannot successfully pass through the MWD to activate the underreamer, making pump-cycle activation the only viable option.

For battery-powered MWD systems with no ID restrictions, the rathole underreamer can be activated via RFID technology, with the RFID tag able to safely pass through this type of MWD assembly. Field experience to date has shown no interference between the RFID signal and the operation or communication between the MWD and RSS assemblies.

By running both reamers in the same BHA during the drilling run, operational efficiency is greatly enhanced, as it eliminates the need to trip out for a dedicated cleanout run. It also minimizes the risks of formation swelling, which may prevent the deployment of the pipe to target depth. In many deepwater wells, this amounts to rig time and spread rate cost savings of $1 million or more, with a corresponding reduction in downtime.

While the new underreamer has been available for less than a year, it has successfully cleaned out the ratholes of several deepwater wells, allowing subsequent casing running and completion operations to be executed more efficiently and reliably.

The system is commonly deployed in one of two configurations. For applications in vertical wells where the RSS is not required, the tool is placed above the bit and below the MWD. For applications in which directional drilling (and hence, a RSS) is required, the reamer is placed between the RSS and the MWD. Because the MWD and RSS must have a hard-wired connection to communicate, this second option requires an underreamer design that allows a wire to run through the tool. This wire maintains the necessary MWD/RSS connection, and thus far no interference or connectivity problems have been observed between the systems in the field.

One major operator in theGulf of Mexico selected the underreamer technology to enlarge the borehole of an exploratory well located in 4,850 ft (1,478 m) of water. The operator was particularly focused on getting the over-gauged hole to within 15 ft (4.6 m) of target depth to allow sufficient annular space to place a strong and fully consolidated cement job around the casing at the shoe. The 12¼-in. pilot well was to be expanded to 14½ in., and due to the turbine-powered MWD system in use on the drillstring, the operator required pressure cycling activation of the underreamer.

Weatherford deployed the underreamer without incident, allowing the operator to successfully activate the tool beneath the MWD via pressure cycle commands. The reamer enlarged more than 730 ft (223 m) of borehole to 14½ in., leaving the operator with less than 15 ft (4.6 m) of rathole. This hole enlarging option saved the operator roughly three days of rig time associated with a dedicated cleanout run, which would have cost an estimated $2.5-3 million.

The initial successes observed in GoM wells are getting the attention of other operators ofdeepwater assets around the world. Similar completion and well control challenges exist in the deepwater regions off Norway, Brazil, and West Africa, and this new underreaming application promises a safe, efficient, and economically viable solution.