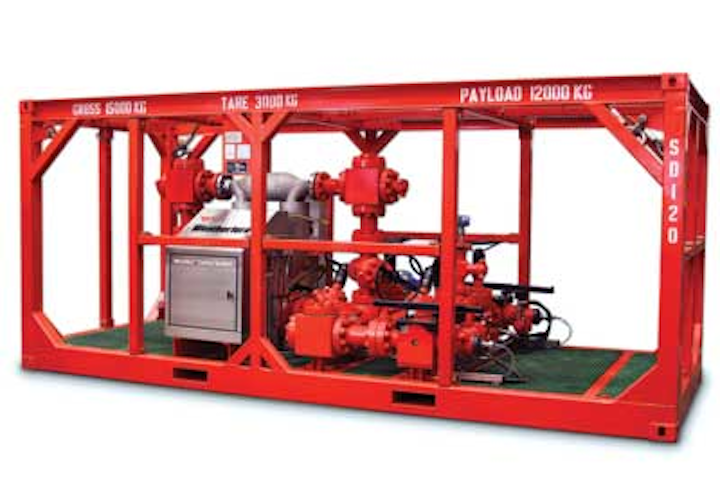 A complex set of challengesoffshore West Africa has defied drilling efforts for more than 40 years. Multiple attempts in the area's high pressure/high temperature and regressive pressure regimes using conventional methods have been unable to construct a wellbore to total depth.

The primary objective of the gas well in the Etinde field was to reach the top middle Isongo reservoir sand at approximately 10,335 ft (3,150 m) measured depth (MD). Doing so required drilling within a very narrow window between pore pressure and fracture gradient.

In prior experience dating to the 1970s, drilling had been severely challenged due to loss of pressure during drilling pipe connections. This, in turn, set in motion well-threatening kick/loss cycles, and major variations in the pressure gradient at different depths.

MPD overcame these conditions by using a lower mud weight and managing downhole pressure with the combined effects of equivalent circulating density (ECD) and surface backpressure (SBP). This was achieved using a rotating control device (RCD), an MPD manifold, and other associated equipment to create a closed loop circulation system. The closed loop system enabled greater control of the wellbore pressure using an automatic choke and algorithm-based well parameters that make up Weatherford's Microflux control system. A Coriolis mass flow meter provided accurate flow monitoring to enable the rapid identification of losses and gains within the closed loop system.

The static mud weight of 12.9 to 14.2 ppg in the 12¼-in. section and 14.2 to 15.5 ppg in the 8½-in. section would have been statically underbalanced in conventional drilling. To use the lower weight mud, ECD and/or SBP was required at all times to maintain bottomhole pressure (BHP) within the drilling window above pore pressure and below the fracture gradient. The operating target was to remain at least 100 psi above the pore pressure gradient at all times while drilling and during connections. For tripping operations, a heavy mud cap was planned at a suitable depth to balance the well without SBP to allow removal of the RCD bearing assembly.

The purpose of implementing MPD was to manage the borehole pressure profile to reduce the chance of well control events. Other goals included increasing wellbore stability, mitigating stuck pipe, and precisely determining and managing the drilling window between pore pressure and fracture gradient. Its use on this well had a significant impact on time and cost savings by greatly reducing expected swab surge problems, and enabled non-drilling operations such as coring, closed loop wireline, liner running, and cementing.

Pre-job modeling had indicated that these operations might not be conventionally possible. The rapid speed in which the ECD can be adjusted via minor changes to the Microflux system also saved time that would have otherwise been spent circulating fluids out of the hole and changing the mud density. This capability alone delivered a significant cost savings over previous drilling operations in the region.

The sensitivity of the MPD system enabled rapid identification, decision-making, and reaction to drilling events, which boosted safety and accuracy, and enhanced confidence in decision making. The application of SBP to a statically underbalanced mud was a key strategy in controlling and applying constant bottom hole pressure (CBHP) in the 12¼-in. and 8½-in. sections. SBP was applied during pumps off events when ECD was not affecting the annular pressure, as well as during drilling to compensate for the shortfall required to stay in the drilling window.

In planning a return to the field, the historic drilling problems and downhole uncertainty led the operator to implement the full scale MPD and closed-loop approach to well construction. These problems were amplified by abnormal pressures, high temperatures that made the mud difficult to condition and control, very low kick tolerance, and the need for a rapid response to mud weight (MW) requirements.

The MPD system, including a mud gas separator (MGS), was installed on the small jackup with no modifications. MPD operations began with fingerprinting to identify expected pressure trends, and in-casing tests to confirm and fine-tune system operation. Tests in cased hole were performed prior to drilling each new section to establish limits and procedures.

While not needed to drill the 12¼-in. section, MPD was conducted to provide operational exposure as well as to familiarize and train the rig crew. MPD operations differ from standard drilling operations and crew performance, and communications are important to smooth MPD operations. For instance, it is necessary to gradually ramp down the pump rates when making connections to allow MPD to compensate for the change in ECD.