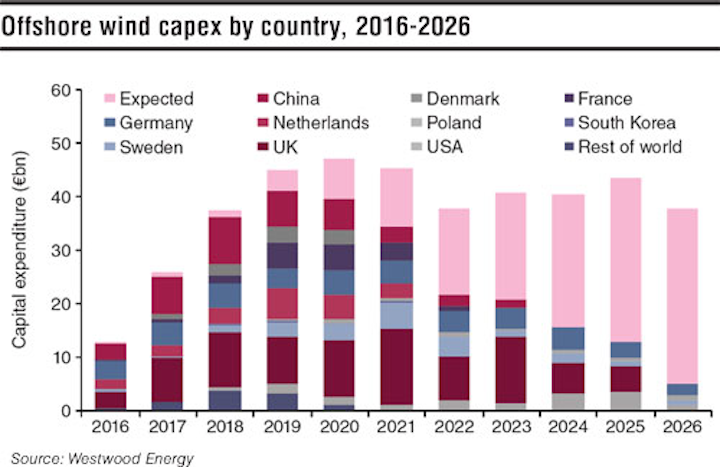 Westwood Global Energy Group’s recently launchedWorld Offshore Wind Market Forecast 2017-2026 shows an encouraging view for the global offshore wind market. Future installation activity and investment in new projects in Europe will continue to be driven by countries aiming to fulfil their renewable energy commitments. While the UK and Germany are expected to maintain their position as European market leaders over the next decade, offshore wind is becoming a more attractive opportunity across the world. Subsequently, Westwood has identified several new emerging markets globally, which are now featured in the latest report, demonstrating a greater worldwide focus on a more diverse energy mix to reduce CO2 emissions.

The forecast is based on a “bottom-up” (project-by-project) market outlook, combined with a “top-down” element to reflect the difference between visible project data and announcements on long-term capacity targets for key geographies. This is represented by “expected” capex and “expected” added capacity toward the end of the forecast period. Westwood offers an in-depth capex analysis presented across the planning and development, hardware and installation phases of the offshore wind life-cycle. Capex is broken down further into 11 key service lines to give a more granular evaluation of forecast expenditure across the industry.

Westwood expects total global capex to reach €402 billion ($460 billion) over the 2017-2026 period. The UK, Germany, and China will be the main contributors to total offshore wind spend, together accounting for 39% of global capex over the next decade. Capex is forecast to peak at €47 billion ($54 billion) in 2020, driven by emerging markets, including the US, France, Sweden, and Denmark.

Prior to 2017, the UK has been the largest contributor to global cumulative capacity at 38%, followed by Germany at 27% and China at 10%. Over the 2017-2026 period, the UK will remain the world’s leader in installed capacity, although its share is expected to decrease to 24% by 2026. The analyst firm expects a slight shift in cumulative capacity ranking by country. China is forecast to see a further 10.7 GW added to its installed base versus an additional 8.5 GW in Germany, exclusive of expected projects. The realization of these additions would lead to China catching up with Germany in terms of cumulative capacity, as both countries are expected to account for 13% of global installed capacity by 2026. 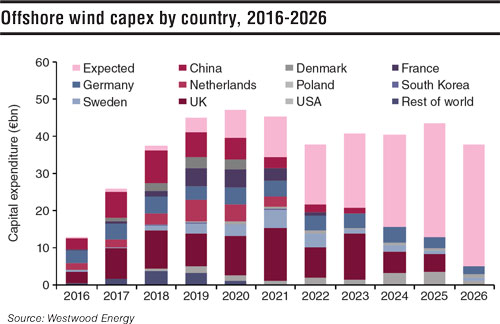 Key offshore wind emerging markets include the US, France, Sweden, Denmark, the Netherlands, Poland, and South Korea. Together, these geographies are forecast to contribute more than 14.5 GW of additional capacity and €69 billion ($79 billion) of capex over 2017-2026, exclusive of projects not yet past conceptual phases. Major recent events across these geographies feature the commissioning of the first operational US offshore wind farm at the end of 2016, the initiation of four floating projects offshore France, the launch of the largest Dutch wind farm - the 600 MWGemini project, and the partial generation of power at the 30 MW Tamra wind farm off South Korea.

The Rest of World category consists of another 12 main countries, together expected to bring an additional 3 GW of operational capacity and to attract a total investment of €10.7 billion ($12.2 billion) over the next decade, excluding expected projects.

The world’s current population of operational turbines is set to grow from ~4,580 in 2017 to ~14,270 by 2026, inclusive of known projects. Approximately 4,070 additional turbines from projects which have not yet progressed past the conceptual stage are also expected over the next decade. The UK, Germany, and China will account for 45% of total turbine installation. Over the forecast period, the most common turbine size is expected to be 6 MW, although some turbine manufacturers are already working to develop 10 MW+ machines, which are expected to be in demand post-2020.

More than 16,000 foundations will be installed over the next 10 years, including expected projects. The UK, Germany, and China will account for 40% of all foundation installations, inclusive of expected additions. Floating wind turbines look set to finally see commercial deployment, following a number of successful prototype offshore wind turbines installed with floating foundations, including:Hywind (Norway), WindFloat (Portugal), Forward - Fukushima Pilot (Japan), and Seatwirl (Sweden), all of which are currently operational. Industry participants expect increased uptake of floating wind turbines after the end of the decade. As of June 2017, Westwood forecasts 17 floating foundations to come online between 2017 and 2026 across the UK, Germany, France, Portugal, China, South Korea, and the USA.

Reduction of transmission losses, as wind farms are installed farther from shore, is being addressed by developers using HVDC cables. More than 42,600 km (26,470 mi) of cables, including array (infield) and export, will be required for offshore wind farms coming online over the next 10 years, inclusive of expected projects. Substations are also now common, whereas historically, wind farms were typically less than 100 MW capacity and close to shore, limiting the need for a substation. Over the forecast, the majority of substations will be AC powered, although DC substation demand is set to grow, following the installation of the first DC substation in 2013.

Expenditure associated with the planning, development, and construction phases represents the majority of the total life-time cost of wind farms and is therefore the riskiest part of the project investment. Westwood has split Planning & Development expenditure evenly over the two years prior to the beginning of construction. Between 2017 and 2026, global Planning & Development capex is expected to amount to €26 billion ($30 billion), accounting for 6% of total spend. 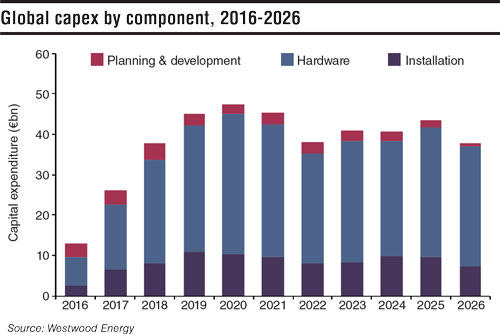 Hardware and installation expenditure has been phased over the individual project’s construction period. Hardware will be the largest contributor to total capex at 72%, within which Turbine (39%) and Foundation (14%) represent the largest portions of total global expenditure over the next 10 years. Installation is the second biggest main service line at 22% over the 2017-2026 period. Cable Installation (9%) and Foundation Installation (6%) are expected to be the largest sub-service lines over the next decade. The installation phase is predominantly driven by supply and demand for installation vessels and helicopters. Installation vessel demand is expected to peak at 58 vessels in 2019. Helicopter use is growing as wind farms are installed farther from shore. Over the forecast, total helicopter demand (inclusive of construction and O&M support) is expected to peak at 17 units in 2025. (Note that Westwood’s analysis is exclusive of helicopter demand from emergency response and standby requirements, which presents a significant upside to the forecast.)

The offshore wind market forecast also examined several other key industry metrics. A few of these are described below.

Cost efficiency. With the surge in offshore wind construction activity, and the reliance on subsidies to encourage construction, targets have also been set to encourage cost efficiency in the market. This includes the joint UK government and industry target of £100/MWh ($130/MWh) by 2020, originally set in 2012. Since then, a combination of economies of scale, increased turbine efficiency, standardization of equipment, and supply chain consolidation have contributed a great deal to material cost reduction across the sector. Subsequently, the UK has reached its government cost target four years earlier than expected, with the cost of offshore wind in the country falling to £97/MWh ($126/MWh) as of January 2017.

Repowering. With the reduction in installation costs, offshore wind continues to improve its competitiveness over fossil fuels and it could become a competitive business proposition when compared with new combined-cycle gas turbine (CCGT) plants beyond the end of the decade. Cost reductions are a function of larger and more powerful turbines, as well as fewer turbines required per wind farm. Consequently, an increase in repowering activity is expected, as new wind farms could be installed on old sites at a much lower cost than originally achieved. Industry commentators expect the repowering market to account for 3-5% of OEM’s installed base post - 2020. (Note that repowering expenditure is not included in the analyst firm’s market forecast.)

Zero-subsidy bids. As the market is becoming more independent of government support, Dong Energy and EnBW have committed to constructing three zero-subsidy wind projects off Germany, relying solely on wholesale prices in place of government funding. Subsequently, the Dutch government has been encouraged to revise the country’s offshore wind tender regulations, which until now have focused predominantly on the size of the bid when deciding on an award. The revisions are likely to result in the consideration of other factors, including incentive mechanisms. Nevertheless, “zero-subsidy” is still a very new concept and it is not expected to become widespread practice before the mid-2020s.

The offshore wind business is set to experience unprecedented growth levels over the next decade, driven by a combination of long-term renewables obligations, energy security policies, and targets on reductions in carbon emissions. While the UK and Germany will remain the European market leaders, new offshore wind markets are emerging globally. France and Poland are among the key countries expected to see their first offshore wind projects online over the next decade.

Projects have grown in scale, which has resulted in an unexpected rapid fall in costs. Consequently, over the next decade, offshore wind is expected to become a cost competitive business proposition when compared with new CCGT plants. Given the increased focus on renewables globally, the industry will continue to attract investment from utilities, large engineering companies, service contractors, as well as upstream oil and gas companies.

Marina Ivanova, Analyst, London, joined Westwood after graduating from the University of Kent in July 2014 with a First Class Honours in European Economics with Econometrics. She has worked on a range of consultancy projects, including a commercial due diligence in relation to the sale of a major North Sea OFS company based in Aberdeen, a strategic review for a French manufacturer of tubular solutions, and a rig-scouting exercise for a Middle Eastern-based operator. Having joined the research side of the business, Ivanova is currently involved in the production of quarterly market updates and is a contributor to DW’s Upstream Investment Outlook, Offshore MMO, Downstream Maintenance, Helicopter, Offshore Wind and Land Drilling Rig market forecasts.