DNV GL recently carried out a Failure Mode Effects and Criticality Analysis for a shipbuilding company on the permanent mooring system of a newbuild FPSO. The key findings indicated that while all individual failure modes have low impact on production, it is the risk of combinations of failure modes occurring simultaneously, as well as the possibility of failure of multiple mooring lines, that can cause significant downtime. 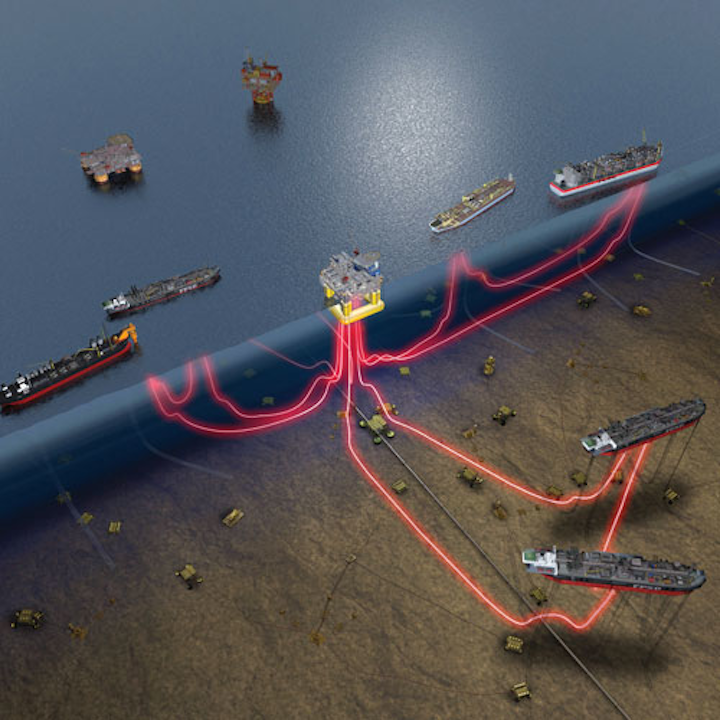 The use of floating production units in the offshore oil and gas industry is predicted to grow at a significant rate. However, the number of mooring-related incidents involving these systems continues to raise concerns in the industry.

In the last two decades, there have been more than 20 incidents globally involving failure of permanent mooring systems on floating structures. In the most severe cases, vessels have drifted and risers have ruptured, causing extended field shutdown. While some of these events have been caused by the impact of extreme weather and new-found phenomena related to the failure of a mooring line, it can be argued that others could have been prevented through more robust inspection procedures.

Although the current market requires an extension to the life of existing structures beyond the design service period of mooring lines, there is a growing need to accurately assess the impact of failure of permanent mooring systems on floating structures. This call to action is twofold- to improve mooring integrity of newbuilds and to extend the existing vessel life.

DNV GL recently carried out a Failure Mode Effects and Criticality Analysis (FMECA) for a shipbuilding company on the permanent mooring system of a newbuild FPSO. Throughout the investigation, it was discovered that there was no cohesive study that covered the entire mooring line to a significant level of detail. The key findings indicated that while all individual failure modes have low impact on production, it is the risk of combinations of failure modes occurring simultaneously, as well as the possibility of failure of multiple mooring lines, that can cause significant downtime.

Multi-line failure in general has been underestimated, and many operators do not carry the necessary spares or have procedures in place to deal with such events. Understanding of the factors leading to multiple line failure is limited compared to research on single line incidents. Notably, though it is widely accepted that single-line failure is not considered severe enough to cause the failure of the entire mooring system, most studies have reported that when one line fails, there could be similar damage to others, which could ultimately lead to several lines failing.

An interesting example is theNan Hai Fa Xian vessel, in which four out of the eight mooring lines broke. All were due to the same cause at the exact same point on each line, resulting in vessel drift and riser rupture. When assessing the cause of mooring line failures, the results were not clear.

To date, there has not been a formally published study which can quantify the combination of failure likelihoods and consequences of failure at specific points along the mooring line. By reviewing these cases, along with other less severe failures, DNV GL produced a holistic view of the failure mechanisms and associated integrity issues that impact mooring systems.

The FMECA was implemented to a single mooring line with a view to cover the main segments of the entire line to a significant level of detail, adopting a bottom-up approach to analyze the failure frequencies and severity of consequences of each potential failure mode occurring on each considered segment, and ranking them using a qualitative criticality hierarchy.

The system was analyzed with respect to the impact that failure would have on oil production performance of the FPSO during normal operation (holding or production mode) only.

The intention of the study is to improve awareness of the failure likelihoods for future newbuilds and highlight the regions of the mooring line which are most susceptible to failure and which are presently not well understood.

The study considered three segments of the FPSO mooring system: the mooring line, suction pile anchor, and fairlead with integral chain stopper. Each segment was divided into the most relevant single elements, which were analyzed as per the FMECA methodology.

The evaluation of the potential failure mode of each element was conducted together with the shipbuilding contractor and the future FPSO operator, and based on the Oil & Gas UK’s Mooring Integrity Guidelines, Issue 3, November 2014.

While all the potential failure modes and causes of each element were identified, only those which were considered to be applicable to the technologies adopted in the design were selected. The analysis excluded unpredictable external events such as severe weather, human error, and line rupture due to collision. It was found that each element is susceptible to several identified failure modes including corrosion, vibration, rupture due to wear at connector interface, and out of plane bending.

The study identified, analyzed, and described in detail a number of factors and the consequences of each failure mode on the operation, functions, or status of the specific segment with reference to the impact on oil production. The end effects referred specifically to the potential failure of a single mooring line but also pointed out (when applicable) some potential for loss of multiple lines leading to total production loss.

Failure detection was defined as the means or methods by which each failure could be discovered either by an operator under normal system operations, by the real-time monitoring systems, by diagnostic actions, or during the regular inspections performed with remotely operated vehicles or by maintenance crew divers. Mitigation was also investigated to determine the compensation provision or recovery actions available or which can be taken by an operator to negate or mitigate the effects of a failure of a segment. These included the design technology and oversizing, quality procedures and checks, preventative maintenance optimizations, periodic segment adjustment or repositioning, as well as design suggestions recommended by the future FPSO operator and accepted by the shipbuilding contractor. 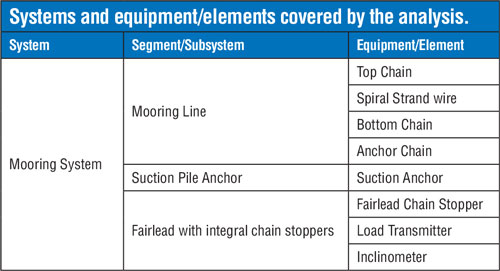 The severity of the consequence considered the potential worst consequence of a failure, determined by the amount of oil production loss that could ultimately occur. The assessment followed a ranking of six different levels of production loss, where one represented a minor loss (<2k boe) and six a disastrous loss (>10M boe).

As the origins of this work were based on a commercial study, it was a specification of the client to use its risk matrix to determine the overall criticality ranking of the identified failure modes.

This was assessed as a relative measure of the consequence of a failure mode in a ranking from one to six, with one being minor and six being disastrous. The ranking was then measured against its probability of occurrence, which was represented with six levels ranging from remote to very likely.

Following the FMECA methodology, each failure mode was analyzed and assigned a criticality ranking based on the assessment of the severity of failure effects and the likelihood of failure modes.

The failure modes are evaluated in terms of the impact to oil production only. Overall, the criticality of all failure modes is very low falling into the lowest criticality ranking category. It is important to highlight however, that the scope of work considered single mooring line failure only, which was not expected to lead to loss of production as it would not result in system failure.

As a consequence, the severity of all the failure events reported in the FMECA worksheets is generally low (severity ranking=1). While loss of single mooring line results in no impact to production, it is pertinent to acknowledge that failure of a single line could indicate similar damage to other lines (as noted with theNan Hai Fa Xian incident) which could lead to multi-line failure. Such an event would lead to prolonged loss of production which has been evaluated to more than 50 days which in turn corresponds to a severity ranking of six on the FMECA criticality matrix. 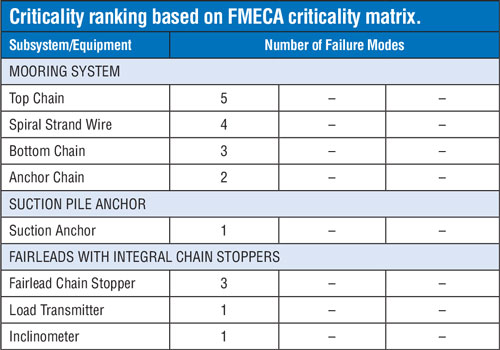 Additionally, as defined in the FMECA methodology, the probability of occurrence has been determined per failure mode per element, which results in very low likelihoods per category. A combination of all the potential failure modes however, will have an overall higher probability of occurrence (with an associated higher criticality) which has not been addressed in this study, but should be the focus of future work.

Although the failure modes have been assessed as having overall low criticality, the following elements have been noted to have medium/high likelihood as the frequency of occurrence is an order of magnitude higher than all other events. This includes the spiral strand wire where vibration and damage due to the low bend radii are issues, the suction pile anchor and problems associated with trenching, and finally the fairlead chain stopping which can experience bearing failure, and the absence of or wrong input from the inclinometer.

Following a sound literature review, it was proven that, while many studies have been dedicated to either specific segments of a mooring line, specific types of failure mechanisms impacting the line, or high-level reviews of existing guidelines, there was no cohesive study that covered the entire mooring line to a significant level of detail. For example, research showed mooring chain failures accounted for the majority (47%) of all incidents, followed by wire rope, and then polyester rope. By number of breaks, mooring chain was still the primary cause.

The DNV GL project focused on the identification of the failure modes of each element for the different segments along the entire mooring system. It evaluated the likelihood of each failure mode, determined the corresponding immediate consequence on production which arose upon failure, associated the current detection methods and mitigating factors, and predicted the overall impact to oil production. Ultimately, each failure mode was ranked by criticality with reference to oil production.

The key findings indicate that, while all individual failure modes have low impact on production, it is the risk of combinations of failures modes occurring simultaneously, as well as the possibility of multi-line failure, that can cause significant downtime. It was concluded that this should be the focus of future work.

Though work has been developing over the past decade to improve mooring integrity, there is still room for improvement from the design phase through procurement, installation, and operation with technically competent oversight throughout.