As the offshore oil and gas market bottoms out and starts to come out of the downturn, there are certain issues that will indicate a shift in how overall subsea well operations are to be conducted. For subsea well operations, the three primary technologies that will have the greatest impact are subsea coiled tubing, surface handling systems, and subsea 18 3/4-in. equipment for P&A capability. 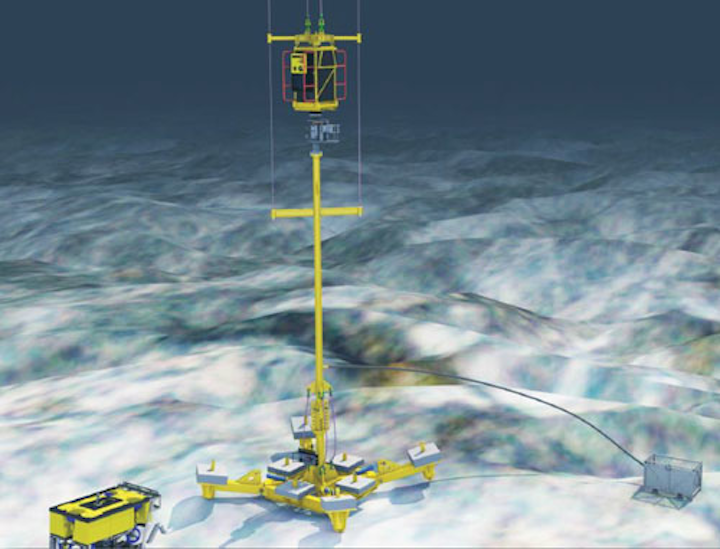 Other key areas that impact subsea well operations, such as downhole technology, are not covered here since their impact will be somewhat across the board. The focus here is primarily on specific issues that may affect non-rig based subsea well activity in terms of vessels, handling, subsea hardware and controls.

With most “new” technologies, their actual origins go back much further than people generally realize. Subsea coiled tubing (CT) is a case in point, with historical developments of subsea reels, injector heads, and power packs dating back decades. In these early days, some projects commenced development, but none reached the commercial application stage.

It would appear now, however, that due to a combination of improved subsea mechanical reliability, improved material capability with regards to coiled tubing, and an increasing demand for non-rig based subsea well access methods, there is an impetus to have an option for riserless coiled tubing well access.

Two main efforts are being undertaken with different approaches. First, Island Offshore is developing subsea well access in conjunction with Baker Hughes whereby a coiled tubing injector, modified for subsea application, is coordinated with a surface injector head to control the coiled tubing.

In this approach, the coiled tubing is conveyed from the vessel through the open water, without a riser, with the surface injector controlling the tension between the vessel and the seabed. At the seabed, a subsea lubricator section, including a subsea injector head, then controls the tension of the CT as it is run into or pulled out of the well. To date, operations have taken place for non-well intervention applications, including coring work in the Norwegian North Sea, but with efforts now under way to commence riserless coiled tubing well intervention.

Both of these systems are pursuing intervention options that will fundamentally change how subsea well operations are approached. The ability to enter a well with coiled tubing offers improved capability for operations without the disadvantages of vessel size and inefficiency of running riser. Additionally, the watch circle required when running a riser can lead to increased exposure for weather downtime, which is eliminated when a riser is not required. In reality, such black and white pros and cons will be more subtle. For example, smaller vessels will be at a disadvantage when handling coiled tubing reels and pumping spreads needed in order to conduct well operations. Tool change out requiring subsea retrieval will take longer, but this will be offset by the elimination of running and retrieving the riser in the first place. There are several iterations that need to take place regarding how the final subsea coiled tubing approach will be achieved, but the steps necessary to commercialize this aspect of subsea well operations are already under way.

Another area of interest, not directly connected to the above currently, but in parallel to it, is that of material development in the form of composites. Composite materials, including coiled tubing, have been in development through various systems for over 20 years. To date, the most successful application has been in two key areas: large-diameter strings for open water applications for hydraulic intervention (acid stimulation) and small-diameter solid strings for improving “wireline” capability to enter horizontal wells.

The truly exciting development will be the merger of both subsea riserless coiled tubing systems with material improvements in the form of composite coiled tubing. The dramatically enhanced fatigue life of composite material, coupled with reduced footprint and improved operating criteria afforded by riserless operations, will produce a dramatic alternative to currently available coiled tubing subsea well re-entry techniques.

With regard to subsea well operations, surface handling systems started out basically as a solution for rig-based well services. In these scenarios, crews had a need for a lifting frame through which a standard derrick could handle injector heads and lubricators. Originally made from drill pipe with a yoke top and bottom, and sometimes still referred to as drillstring lifting frames, these developed into more complex compensated coiled tubing lifting frames. Although remaining much the same, even as dedicated well intervention vessels arrived on the scene from the 2000s, it is only recently that we have seen fundamental changes to this aspect of operations.

Two main developments have recently taken place which may continue to alter the approach to subsea well operations. First is the development of a comprehensive lift frame which offers not only the ability to store the coiled tubing injector head as well as the lubricator sections, but also to allow personnel access without the need for man-riding. This was an overall improvement in safety, but the improvement in efficiency can only be achieved by optimizing the vessel layout to accommodate what is a much larger lift frame than seen in the past.

The industry is also developing multiple options in terms of design capability and availability for handling systems, available for multiple vessels and vessels of opportunity. The main operational challenge is that of the time taken to prepare the vessel for a particular operation. Another challenge has been the business case for justifying capex without transparency on the durability of such modular systems.

The solutions arriving on the market now have improved modular design combined with improved capability for vessel motion handling, e.g. active heave compensation. Probably one of the key developments is the ability to obtain such equipment on a lease basis, which eliminates capex. Such arrangements provide the flexibility needed to promote more flexible use of vessels with multiple capability across all aspects of subsea asset management.

One example available today is the combination of companies offering bespoke systems for use as subsea stimulation packages with flexible commercial arrangements as discussed above. Maritime Developments, as the surface handling equipment supplier, and Magma Global, as the composite tubing supplier, have joined forces to provide such a system. Another company, GE Oil & Gas, is offering this package in conjunction with overall system supply and management. Thus, services are being offered by companies who do not necessarily have to own the key hardware packages. This is a development that reduces the risk profile for subsea well operations, increases operational flexibility for vessel owners, and provides an increased range of options for operators.

With regard to subsea hardware, there is a renewed interest in full size 18¾-in. equipment. Typically, there have been two classes of equipment for operations on subsea wells, standard BOP stacks, and dedicated completion workover riser systems or intervention systems. The latter usually had 3, 5 or 7-in. internal diameters, whereas BOP stacks had standardized on 18¾-in. once older rig-based dual systems were phased out.

Some recent projects have seen simpler 18¾-in. equipment needed for production zone drilling as part of batch development operations, whereby a simpler version of 18¾-in. equipment provided shear seal capability subsea. In addition, in the wake of Macondo there has been a growing demand for well cap capabilities, and that demand can often be satisfied in the form of simple and relatively lightweight 18¾-in. shear seal devices coupled with emergency disconnect capability.

As this niche has matured, and coupled with increasing demand for decommissioning from non-rig based vessels, further refinement and development is being pursued. The demand to conduct full P&A activity from vessels rather than rigs necessitates the need to handle the tubing hanger yet maintain well control when required.

In addition, the requirement to handle any remaining trapped hydrocarbons below the tubing hanger, as well as provide capability to wash and/or strip the completion tubing, is likely to see specialist 18¾-in. equipment coupled with the added features described. When this equipment is married with more standard intervention systems, the full capability of in-well operations will be realized. All aspects of well P&A can be conducted without the need for a rig. There are some exceptions - problematic wells will remain the preserve of a rig-based full deconstruction approach. But the ability to remove lower risk wells from the rig portfolio provides a cost and efficiency benefit to operators.

As the subsea well population increases in volume and in age, the demand for specialized capabilities is maturing into a niche of mix and match offerings to optimize services for operation types (intervention or P&A), water depth, and vessel availability. The ability to select and package the systems together for particular campaigns is the key to subsea asset management efficiency.