Arguably, one of the biggest challenges for many operators is to find new oil reserves in frontier areas or remote, difficult terrains. 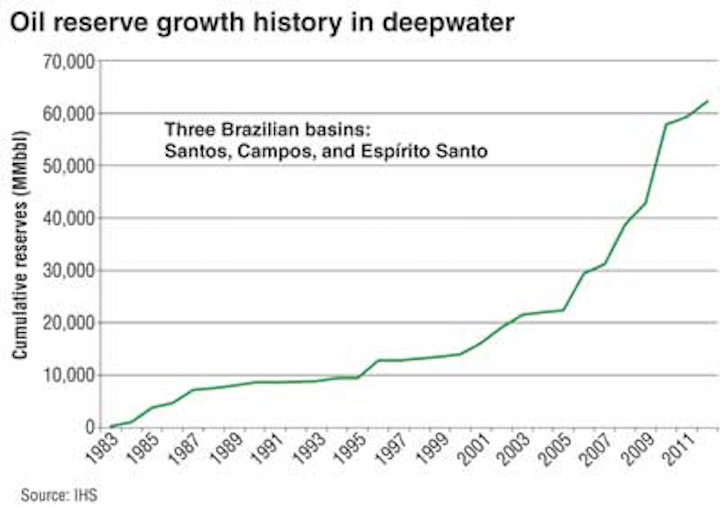 Arguably, one of the biggest challenges for many operators is to find new oil reserves in frontier areas or remote, difficult terrains. Recently, deepwater domains on both sides of the Atlantic Ocean have become major suppliers of new, conventional oil reserves. One such example is Brazil, where the country's deepwater is yielding remarkable growth in oil reserves. Exploration efforts led by Petrobras, the national oil company, resulted in the discovery of 37 Bbbl 2P (proven and probable) of oil during the last 10 years.

Strong commodity prices and the significant size of newly discovered oil reserves are making them economically feasible to produce. However, Petrobras faces additional challenges such as tight supply and demand balance for deepwater drilling and production equipment, as well as rising capital costs. These issues are slowing development and production growth from recently discovered deepwater oil reserves in Brazil.

For Brazil, the question becomes whether the region has the drilling capacity to bring the oil fields to production, and if not, what the implications will be for Petrobras and the Brazilian economy if oil field developments are delayed.

To answer this question, an effort was made to predict the future demand for costly equipment and services as well as to discuss the possible implication of project delays. To understand exploration and drilling trends, IHS used an analytical approach, which involved the integration and analysis of different data sets (including the IHS International E&P database for wells, fields and contracts, as well as offshore rig data), and the use of analytical tools to estimate drilling demand.1

For this analysis, the IHS team used the following definitions for dividing and analyzing trends by water depth: deepwater is indicated at 200 m (656 ft) or greater depth, which is related to bathymetric depth. Recoverable oil reserves are reported using proven plus probable (P+P) categories. 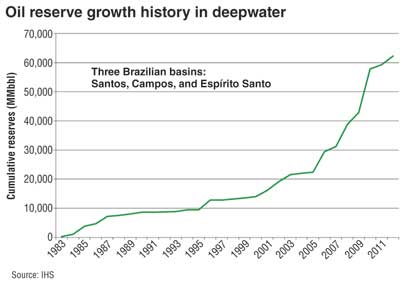 Recent exploration success in deepwater Brazil has made the country a major global source of conventional oil-supply growth. During the last 10 years, more than 100 oil fields have been discovered in Brazil, and 37 Bbbl of oil have been added from the deep waters of the Santos, Campos, and Espirito Santo basins, which accounts for approximately 30% of global conventional oil reserve additions made since 2003.

Based on IHS analysis, due to a significant size and proximity to existing or planned developments, the majority of these deepwater oil discoveries are economical, despite significant water depth and high development cost.

The outlook for undeveloped reserves becomes even more promising when the yet-to-find reserves are assessed and taken in account to calculate total reserve volume in the Brazilian deepwater. The "yet-to-find" calculations are based on a principal feature of field-size distribution analysis, which postulates that there are usually a few large fields followed by an even greater number of smaller ones. The underlying assumption in this methodology is that fields are discovered in order of declining size, i.e., the big ones are typically found first.

The characteristics of these large, early discoveries are extrapolated for the smaller fields that will be found later in the exploration phase. The field-size distribution graph provides an estimate of yet-to-find reserves and their distribution for the Santos basin. According to the analysis, the yet-to-find reserves were conservatively estimated at about 22 Bbbl of oil in just the three above-mentioned Brazilian basins. 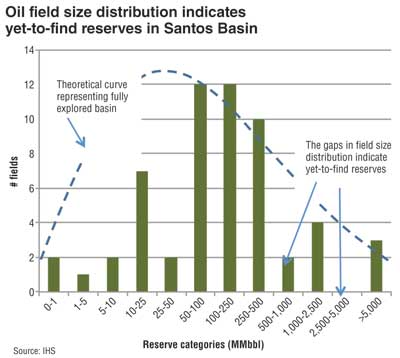 Next, the IHS team asked what it would take to bring these oil reserves to production in the Brazilian offshore, with the understanding that wells drilled for exploration and production purposes are one of the most costly components of any oil field development scenario.

Despite these costs, since 2009, there has been a significant increase in drilling activity in Brazilian deepwater areas. Petrobras is making considerable efforts to boost production in its deepwater basins, and today, the current annual drilling rate is in the range of 165 to 175 deepwater wells, which includes both exploration and development wells.

Calculations performed using the IHS cost-estimating tool Questor showed that Brazil will need to double the number of deepwater wells drilled in the next eight years to develop existing proven reserves, reaching the rate of 350 wells per year by 2020. This represents a substantial increase in drilling activity, which cannot be achieved without adding additional deepwater drilling rigs in the region.

To meet the demand for drilling, beginning in 2006, Brazil gradually began adding deepwater drilling capacity and reached a maximum level of 81 deepwater rigs in 2011. Moreover, in 2011 and 2012, Petrobras contracted local Brazilian shipyards to build 30 drilling rigs (five semisubmersibles and 25 drillships). One of Petrobras' priorities is to increase the local content in offshore development projects.

Unfortunately, local industry does not necessarily have enough capacity and experience to meet the demand for drilling ships and other deepwater equipment. It appears that the local content mandate is limiting the current field development plans, resulting in project delays.

With that being said, the Brazilian government recognizes that it is extremely difficult for Petrobras alone to meet aggressive oil production targets and continue its extensive exploration program. To bring additional exploration and production capacity to the country, the Brazilian government held the 11th bid round, which offered 289 blocks in 11 basins, including marginal and frontier areas, to international operators. Two further bid rounds were scheduled in 2013. Petrobras maintains a $237-billion capital budget for 2013-2017, and in order to partially finance the expenditure for the necessary drilling campaign, the company is planning to divest its non-core international assets.

At this point it is unclear whether Petrobras is capable of doubling its deepwater drilling capacity in a six-to seven-year time interval, but the scenario of project delays is becoming more realistic considering budget constraints and a lack of drilling rig availability in the region. 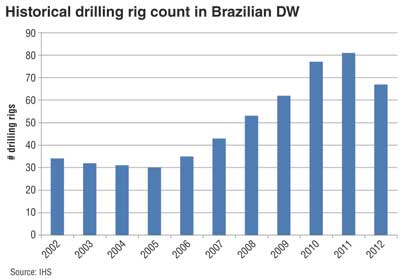 No time for delay

The delay of field development during 2013-2020 will certainly impact Petrobras and the Brazilian economy. The consequences of delays are not only the lost revenue and undervalued stock price, but also the ramifications of increased public pressure on the government to implement expected social programs.

Another important factor to consider is fast growing unconventional shale oil in the United States and Canada. Successful development of the gas play in North America resulted in significant gas price drop in the US, from $6.87 in 2007 to $2.88/tcf in 2012. North America has essentially become self-sufficient in terms of natural gas supply. Some of the major international gas development projects oriented toward the US market have been put on hold or postponed as a result of the North American unconventional revolution, including the development of the giant Russian Shtokman field.

Similar to the North American gas scenario, the success of shale oil in North America has led to softening of global oil price and shrinking US import volumes. An oil price drop below $80 per barrel will result in longer payout periods and make smaller-sized discoveries uneconomic, so Brazil can ill afford long delays in getting its reserves to market. The total reserve volume of these marginal discoveries is more than 6 Bbbl of oil. 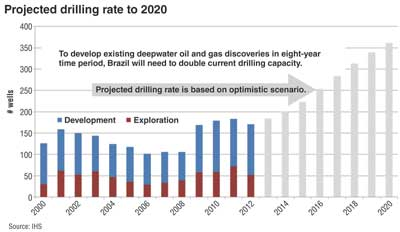 The obvious solution to boost production in Brazilian deepwater is to ease the government's local content requirement – the major cause for delays. Drilling and production activity will also increase more rapidly if the Brazilian government is able to bring additional capital and equipment in the region and if the government actively seeks to partner with international operators. These operators who seek access to Brazil's prolific oil reserves have the technological expertise, the experience, the highly trained workforce, and other resources necessary for these capital and resource-intensive, deepwater presalt operations.

Due to the increased competition for exploration investment, combined with the high costs and technical challenges that exist in these deepwater environments, Petrobras also may well wish to consider farming-out some minor interests in these big deepwater developments. Currently, Petrobras owns 80% of all oil reserves in Brazilian deepwater. This number is quite high when compared to the 36% deepwater reserve ownership of the Norwegian state-owned oil company, Statoil.

Divesting some minor interests in its oil field developments will not change Petrobras' dominant strategic position domestically. But these partnerships will bring the company the additional capital and technical recourses it needs to accelerate field developments and maximize the country's oil production before the demand/supply shift created by the North American shale energy revolution significantly alters the demand for Brazilian resources in the region.

The analysis presented in this paper is based on the IHS International E&P database EDIN, IHS- Rig Point, and decision-making tool IHS Questor.