Deepwater developments have long been touted as one of the most important sources of new oil and gas production. However, production levels have been relatively flat over the last four years, and the historic high is still the 7.2 MMboe/d set back in 2010. So what is going on? Where are these deepwater projects being developed? Is the activity going forward enough to produce results beyond that of just battling decline, or is it time to revise the former positive outlook for the deepwater giants? 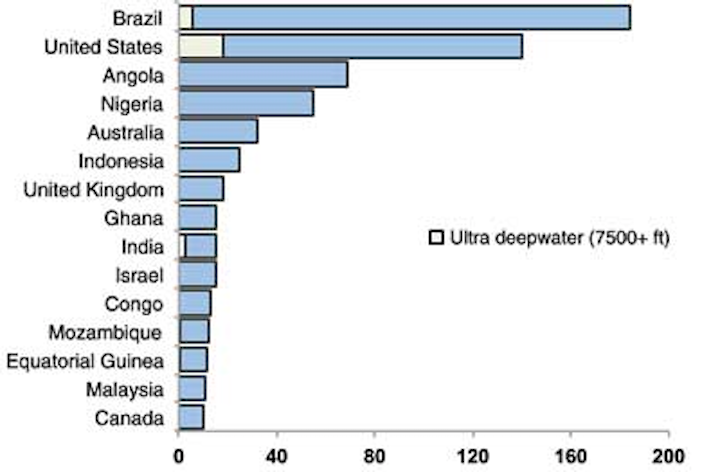 Deepwater developments have long been touted as one of the most important sources of new oil and gas production. However, production levels have been relatively flat over the last four years, and the historic high is still the 7.2 MMboe/d set back in 2010. So what is going on? Where are these deepwater projects being developed? Is the activity going forward enough to produce results beyond that of just battling decline, or is it time to revise the former positive outlook for the deepwater giants?

When the word deepwater is mentioned in an oil and gas setting, three regions immediately come to mind; Brazil, the US Gulf of Mexico, and West Africa (mainly Angola and Nigeria). Historically, these three regions have dominated the deepwater scene and accounted for approximately 82% of the world's deepwater production in 2013 (deepwater > 1,500 ft). Not surprisingly, the largest deepwater producers are also the largest markets going forward.

The largest deepwater markets toward 2020 are Brazil, United States, Angola, and Nigeria, accounting for $185, $140, $70 and $55 billion in capex, respectively, over the 2014-2020 period. In fact, the four largest markets are in total 2.5 times larger than the combined contributions from the remaining 11 countries on the list. The majority of the capex is forecasted to be in the deepwater segment from 1,500-7,500 ft. Of the top 15 countries, it is only Brazil, US, and India that have any sizable spend in the ultra-deepwater segment over the forecast period.

Brazil has been one of the markets that the world's oil and gas industry have rushed toward over the last decade for its massive presalt discoveries. The country now has discovered offshore resources of close to 53 Bboe, only surpassed by Qatar, Iran, and Saudi Arabia with 106, 80, and 64 Bboe of offshore resources, respectively. However, while the Qatar and Iranian resources are close to 70% gas, the Brazilian resources are more than 80% oil (as with Saudi Arabia). With approximately 75% of these resources located in deepwater, it should come as no surprise that Brazil is the biggest deepwater market globally.

The biggest ongoing Brazilian deepwater developments are in the Santos basin. The second, third, and fourth phases of the Lula development will require a total of five large FPSOs. In addition, there will be a need for two FPSOs for the adjacent Iracema structure. Together these phases are estimated to account for $28 billion in capex over the 2014-2020 period. The developments of the giant Buzios field (x-Franco), Sapinhoa North (x-Guara) and Lapa Southwest (x-Carioca) are also under way in the Santos basin. While Buzios will require five FPSOs in a three-phased development, Sapinhoa North will "only" be one FPSO. Lapa will be developed with one leased unit initially, but several units will be needed in subsequent phases. Of fields yet to be sanctioned, Iara, Iara NW, Iara Surround and additional phases of Lula and Lapa (all Petrobras) and Atlanta (Queiroz Galvao E&P) are among the most interesting projects in the Santos basin toward 2020.

It is not only in the Santos basin where field development is going on. Between 2014 and 2020, the Campos basin has several upcoming projects with Petrobras' Tartaruga Verde et Mestica and Parque das Baleias South as the two most interesting, both developed with one FPSO each. In the Espirito Santo basin it is the Parque dos Doces development that is likely to spark most contractor interest. The field is a joint development of three discoveries where Petrobras plans to use a leased FPSO; the tender is reported to come into the market in late 2014/2015.

Although blessed with tremendous offshore and deepwater resources, the development of the offshore fields and Brazil's oil and gas industry has seen its share of issues. The strict local content requirements have led to a significant cost increase in Brazil and the local supply chain is constrained. This has led several oil field service companies to take large losses on contracts with Petrobras, and project delays seem to be the rule rather than the exception. The cost increase is also affecting the oil companies as the large Brazilian discoveries now are becoming increasingly costly to develop. Although strict local content requirements are in place, several projects have been allowed to move parts of the construction outside of Brazil to reduce delays.

The much touted auction for the Libra field in October 2013 received limited industry interest, mainly due to the operators viewing the requirements for the license as too strict. The oil field, which was originally drilled by Petrobras on contract from ANP on unlicensed acreage, only received 11 bids as opposed to the government's expectations of 40 bids. An increasing realization among Brazilian politicians that strict oil policies might have become a constraint in the development of the country's rich resources sets the scene for the upcoming elections in October 2014. Moderation of some policies might be an outcome even if current president Dilma Rousseff is re-elected.