Subsea power distribution is now a reality. It will become even more prevalent in future subsea processing units due to environmental constraints such as arctic conditions. 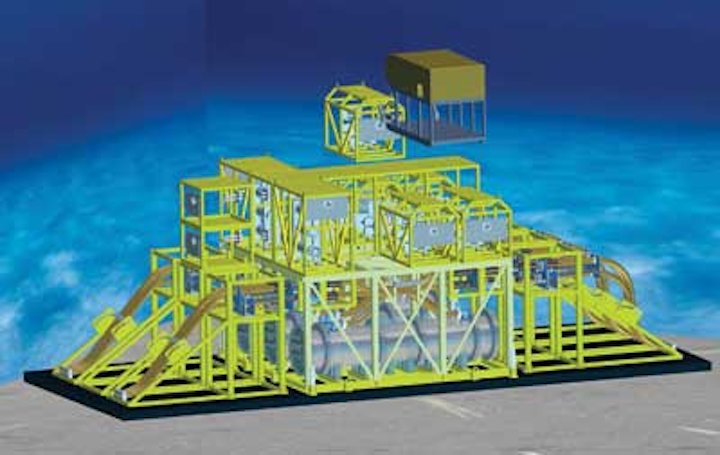 Benefits to seabed processing will grow with opex, safety advantages

Subsea power distribution is now a reality. It will become even more prevalent in future subsea processing units due to environmental constraints such as arctic conditions. Also, the cost reductions that come with eliminating offshore platform opex and demands on personnel safety will become more attractive as production fields in remote locations are brought online.

Getting the necessary power subsea will require use of high-voltage distribution equipment (HV: voltages > 1000V, LV: voltages ≤ 1000V). All the expertise for terrestrial HV distribution systems is needed in addition to the integration of new techniques and new ideas to meet the constraints of subsea installations, especially pressure and presence of saltwater.

Most important, it is necessary to consider subsea power distribution as a complete system, from the shore station to the loads. The complete electrical network including its protection and remote control must be very robust; this means enhanced tolerance to faults and disturbances.

As with all oil and gas process plants, high availability of the electrical power distribution remains a primary design criterion. Availability is often confused with reliability which is only one of its components. Data used to determine the availability of a system are the Mean Time To Failure (MTTF) and the Mean Time to Repair (MTTR), both commonly expressed in hours. MTTR is the inverse of the failure rate λ (failures per hour) and λ is often considered to be the definition of reliability. It is not only the numbers used for MTTF and the MTTR, but also the operator's confidence in their validity that is important. Only equipment with proven track records should be considered for use in subsea power distribution.

MTTF / (MTTF + MTTR) quantifies the availability of a system. An availability approaching 1 means the MTTF is very high and the MTTR is very low. Systems where maintenance may be difficult due to weather conditions, such as in the Arctic, generally have high MTTR values, sometimes months due to the annual ice cover. For such systems the MTTF must be very high to offset this high MTTR value.

Some equipment has a higher MTTF than other equipment due to the nature of its components. One example is HV switchgear equipment in the 36 kV class. This equipment consists essentially of circuit-breakers, current transformers, voltage transformers, busbars and insulators, and has been used for the last several decades. The most complicated piece is the circuit-breaker which has undergone much development over the last 20 years to become very reliable and considered by many as maintenance free. Standard HV circuit-breakers using either vacuum or SF6 (sulfur hexaflouride) as an interrupting medium are considered by international standards as sealed for life.

To reduce the size of enclosures installed subsea, SF6 gas can be used as insulation. This is the subsea equivalent of GIS, short for gas insulated switchgear. GIS is often used as the main switchgear in large terrestrial industrial sites. Its success is due to the small footprint and high reliability, both important for subsea applications. The small size reduces the wall thickness required for subsea enclosures and thus the weight of the equipment. Also, having the complete HV part at the same pressure avoids the need for penetrators within the switchgear between housings at different pressures. Penetrators ensure the electrical insulation and withstand the high pressure difference between components in different housings. Limiting the number of penetrators that have to withstand high pressure differences is one step toward achieving a high MTTF.

Together with this HV equipment, it is necessary to provide protective relays and control equipment to remotely switch on and off the power to loads, and to connect or isolate switchgear itself. Such equipment uses electronic components and these are often considered to have a lower MTTF than the HV power equipment. The other difference is the size – protective relays and control equipment is compact and light compared with the power equipment.

Along these same lines, the remote control and protection equipment also must have a proven record. In addition to the requirements for installation in a subsea environment, the control equipment algorithms must be considered in the same manner as those used for vessels sent into space. There are many similarities between outer space and deep sea environments; both require total flexibility of the control and protection algorithms that are implemented in the embarked equipment. It is necessary to be able to adapt to any new situation that the equipment may find itself in. It should be possible to do anything with the equipment, subject only to the authorization. Since personnel safety is not a consideration for commercial operation in a subsea environment, the range of possible actions is larger than for equivalent terrestrial installations.

It makes sense to consider these two parts (HV power equipment; protection and control equipment) differently with respect to maintenance. The higher reliability of HV power equipment justifies its installation in one enclosure that will be larger and heavier than enclosures required for the electronic equipment. The high MTTF of such HV equipment means that the possibility of requiring a larger vessel for retrieval of a defective module is remote. This offsets the higher cost and longer pre-maintenance logistics delays associated with such vessels.

Another challenge is auxiliary power, often referred to at the Achilles' heel of all power systems. All communication equipment, protective relays as well as control and monitoring devices, require auxiliary power. If the auxiliary power supply fails, the subsea switchgear is inoperable, resulting in production outages. For terrestrial power systems, auxiliary power often comes from incoming power lines and is backed up by batteries. Batteries provide the power for a controlled shutdown should the incoming lines be deenergized.

While this is possible for terrestrial installations where intervention is easy, it is not a good solution for subsea power distribution. It is not possible to see into subsea enclosures nor access any devices, so auxiliary power must be available to be able to confirm the status of the power equipment and, perhaps, to switch devices on or off before energizing any power umbilicals to the subsea equipment. Since the duration of the outage may vary widely, sizing the battery is difficult and perhaps even meaningless. Battery-backed systems can be engineered correctly only when the maximum backup time is defined.

The best solution to this auxiliary power supply quandary is to provide power directly from shore where backup power can be provided by diesel generators or some other standard solution. This eliminates the need for subsea battery backed auxiliary power. To get auxiliary power from shore, an HV direct current (DC) link (typically 2 kV to 4 kV) is used. This link is achieved via redundant cables integrated into the HV alternating current (AC) power umbilical.

Installation of a power umbilical is often a high percentage of the total cost. At the subsea switchgear, the HV DC is converted to LV DC for use by the protective relays and control equipment. The redundant HV DC converters are installed in separately retrievable housings. The fiberoptic cables are connected to Ethernet switches in the protection and control system.

The protective relay and control equipment for each circuit-breaker are also installed in separately retrievable housings. The best design is such that each control module provides protection and remote control for two circuit-breakers. If one control module fails, it can be replaced without any process outage. The second module provides protection and control during replacement. Thus redundancy comes without additional equipment.

Both of these innovations – electronic equipment in separately retrievable enclosures and auxiliary power from the shore station – maximize availability. The MTTF is increased in two ways. The first is by removing all electronic equipment from the enclosure housing the HV power equipment. This virtually eliminates the need to retrieve the HV equipment module which requires a process shutdown. The second is by providing redundant power, control, and protection equipment. The control and protection equipment provides redundancy without additional components. This means that a single failure in any separately retrievable module will not require a process shutdown, even for the short time required to disconnect and replace a defective module.

The MTTR is reduced by allowing maintenance to be performed on equipment that has a smaller MTTF. Since retrieval of these modules can be done with standard maintenance vessels, the only significant time delay could come from adverse weather conditions such as ice cover. Even this can be avoided by providing flotation devices such that an ROV can remove and replace a module without a vessel nearby. This is an advantage in Arctic regions where the yearly ice cover could prevent vessels approaching the location of the equipment. Increasing the MTTF and decreasing the MTTR brings the availability much closer to the ideal value of unity.

Another key factor is being able to thoroughly test each piece of equipment prior to integration and system tests. The modular structure allows such testing at the manufacturing locations prior to final assembly for testing and deployment.