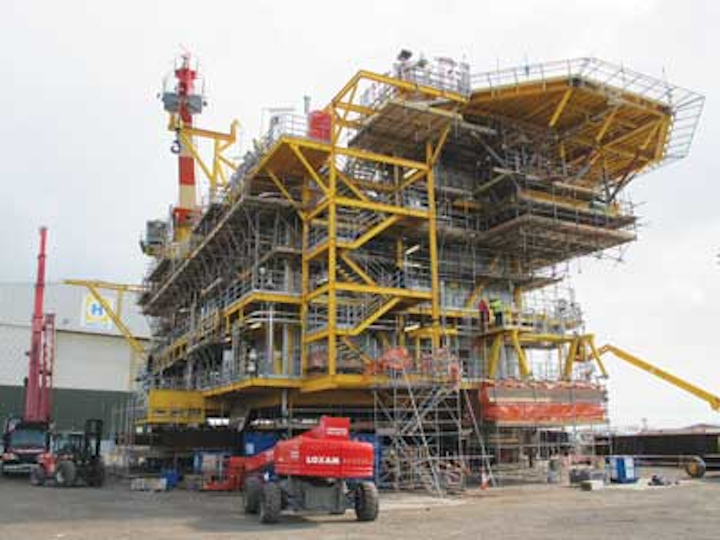 Last month Centrica's Ensign platform, built last summer by Heerema Hartlepool, produced first gas, also in the UK southern sector. The first of the trio, the F3-FA self-installing platform, has been in service for nearly 18 months in the Dutch sector. Ensign and F3-FA were among a package of fields that Centrica took on after buying Venture Production toward the end of the last decade. A little earlier, it had acquired operatorship of York from Hess, later buying out the remaining equity held by BP and GDF Suez.

York was one of the UK's larger undeveloped gas accumulations, with in-place reserves of over 260 bcf. But only 106 bcf may be recoverable, due to a shared fault with the Rough reservoir 3 km (1.8 mi) to the south. Centrica also operates Rough, as the UK's sole offshore gas storage facility. This may limit the scope for depressurization of York later in the field's life to boost recovery, because of the potential adverse impact on Rough. Hess was not comfortable with this situation, and it is an issue that Centrica too will have to address.

The field comprises various reservoirs in UK blocks 47/2a, 47/3a, 47/3d and 47/3e, in an average water depth of 45 m (147 ft). During FEED studies in 2009, the company considered exporting the gas via a spur link to the offshore Cleeton-Dimlington pipeline, operated at the time by BP. However, BP decided this was not feasible, according to Centrica's Offshore Project Manager Ray Sheldon, leading to the decision to put in a dedicated unmanned platform on York, connected to and remotely monitored from Easington.

Heerema Hartlepool was awarded a lumpsum EPCI contract for the platform in February 2011, with Centrica targeting sailaway in May 2012. As fabrication did not begin in earnest until June 2011, construction effectively took less than a year, which is fasttrack even by recent southern North Sea standards. This was also the largest jacket Heerema Hartlepool had built in recent times.

Genesis Oil and Gas Consultants developed the design with HFG completing engineering in Zwijndrecht, the Netherlands. The platform, which will comprise a standard four-leg, cross-braced jacket substructure weighing 1,700 metric tons (1,874 tons), will include rigging risers and J-tubes. It will have six well slots and be fixed to the seabed via 800-mt (882-t) piles. The three-tier topsides, weighing 1,200 mt (1,323 t), includes emergency overnight accommodation for maintenance personnel if the weather turns bad. Total height of the completed platform will be 86 m (282 ft), excluding the crane.

After East York, Centrica plans to drill one or two wells into South York under the first development phase. There are spare risers and spare J-tubes to accommodate production from two subsea wells and, at a later date, from further satellite or third-party gas fields in the area, depending on first-phase and future depressurization performance (a slugcatcher formerly deployed on BP's Amethyst platform to the south is already in place to manage any resultant liquids).

Southeast and Northeast York could both be drilled from the platform, while West York and Vaduz would be subsea developments. Whatever the outcome, there is space on the topsides for tie-ins by adding equipment such as a separator, a produced water system, or subsea control modules. "The base case," Sheldon says, "is for an eight-year field life, after which the platform could serve as a hub. Both the platform and pipeline are designed for 25 years' service."

The export pipeline diameter is deliberately oversized at 16-in. (40-cm) to cover these eventualities – 12-in. (30.5-cm) would have been sufficient for York's capacity of 120 MMcf/d. The pipeline will be connected to the landfall at Easington and installed via cofferdams on the beach, with a flat-bottom pipelay barge performing pull-ins. A tunnel drilled through cliffs will take the final section directly to the terminal. There will also be a piggyback 3-in. (7.6-cm) line taking methanol from Easington to the platform.

Steven Turner, project manager at Heerema Hartlepool, said the main challenge was Centrica's schedule, "which meant moving into fabrication just three months into contract award, with a relatively immature design, and also the need to manage the risks in the project phase. Traditionally, large fabrication projects do not have a good record for being on time, but in this case we were able to work as a committed, integrated team with the client, thanks to HFG's framework agreement with Centrica."

Topsides fabrication started initially with primary steelwork for the cellar deck, followed last August by assembly of primary steel for the mezzanine deck. In September, the first of the deck lifts (the weather deck) took place within one of the covered assembly halls on Hartlepool's Victoria harbor. "Our philosophy is to maximize work done in the shop before moving the topsides and jacket outside," Turner said. For logistical reasons, the helideck was built upside down in December, with the topsides moved outside the hall in February. Then followed installation of pipework, the pedestal crane, and the helideck, all during March.

Jacket fabrication could not start until last November, with large lead-in times for procuring plate materials and delivery of rolled tubulars, mostly from Germany. The first jacket leg was completed in December, followed in mid-January by the jacket truss line assembly. In February, the jacket truss line was moved outside the hall with roller stools already attached. Jacket roll-up was completed during the third week of February, and then high-level horizontal cross-members were installed. In April, the focus was on installation of the risers and grout piping.

According to Centrica, the combined cost of the York and Ensign developments is £450 million ($723 million). Both are integral to the company's goal of lifting its annual production by 50% to 75 MMboe/yr by 2015-17. By 2020, Britain could be importing 69% of its gas requirements, up from 48% in 2010. As a distributor, Centrica has 10 million customers in the UK, so it is in the company's interests to maximize production of remaining gas on the UK continental shelf, said Southern North Sea Director Greg McKenna.

Centrica is doing this via a combination of:

For 25 years, no major initiatives had been attempted to prolong Morecambe North's lifespan. That changed in 2010, following Centrica's takeover of Venture Production. McKenna says: "Through a combination of innovative thinking and new technologies we have been able to bring new life to Morecambe. We have looked at the field in a different way, and are now considering well enhancement and debottlenecking measures that could extend production by another 20 years. In recent times, there have also been great advances in seismic technology and processing, with more powerful computers and associated software and alogorithms. We have uncovered new ways to analyze and re-evaluate old seismic at Morecambe North and also at our Markham complex on the Dutch/UK maritime median line, with the aim of getting more hydrocarbons out in both cases."