Temperature and time - the "twoTs" - are crucial elements to stopping fires, esp-ecially within enclosed spaces or composite structures. 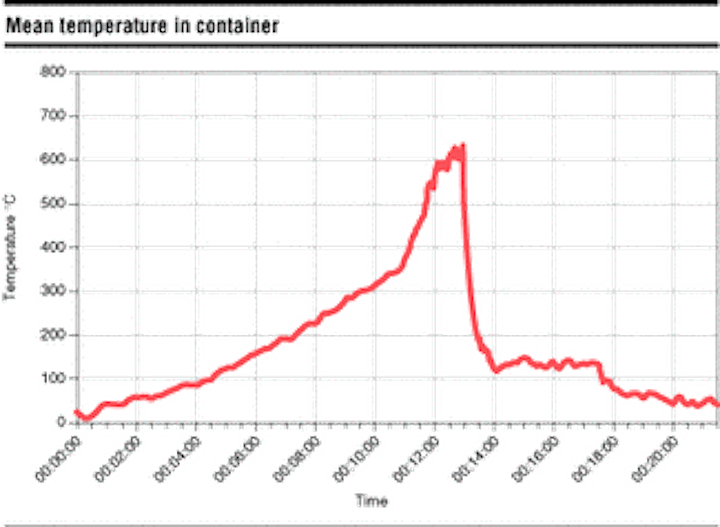 Temperature and time - the "twoTs" - are crucial elements to stopping fires, esp-ecially within enclosed spaces or composite structures. The development of the Cobra Cold Cut System, the "Cutting Extin-guisher," by Cold Cut System attacks the fire at these two important points at the same time. The system can be described as an integration of water-jet cutting and water misting extinguisher in a lightweight handheld system.

Hydraulic water-jet cutting has been around for years, but only over the last two years has this technique been applied to fire fighting. Research on cutting holes in house roofs led to the development of a handheld Cobra, a water-jet "lance" for the purpose of damping fires quickly. The working pressure of the system is provided by standard pumps and piping operating at 200 bar of pressure (3,000 psi). This is only one-tenth the pressure used in commercial water-cutting tools, but is sufficient to cut through most materials in less than a minute, depending on material thickness.

Water flows through the lance at 50 liters/ minute while the abrasive is fed into the water stream at 2-3 liters/minute.

The heart of the system is the patented nozzle which concentrates the water stream to create the high-pressure abrasive jet. A curved positioning guide at the front of the lance keeps the nozzle at an optimum distance from the target to be pierced.

In a fire time is crucial. The more quickly fire fighting action can begin, the more quickly people and equipment can be saved. In most situations heavily fire-involved structures require the work of "smoke divers," fully suited fire fighters who enter the fire to search for victims and douse the flames. It takes time to get prepared, to organize, and to be sure that the supporting members of the fire team are ready to help.

With the Cobra lance, a room can be pierced from the outside and the fire dampened in moments. One or two people are all that is required to operate the system. This means that the first workers on the scene can act to dampen the heat regardless of the intensity of the fire. This can save 5-10 minutes, countless dollars in expensive equipment, and any lives that may be endangered.

The lance shoots a stream of water initially to carry the abrasive, which cuts through the outer wall. Once the water stream enters the heated environment of the room, the water takes on a second role as a cooling agent. The water flares outward from the jet into a mist that quickly fills the enclosed space.

Water's high heat absorption property comes into play pulling the heat out of the fire. As the water vaporizes, it forces air away from the fire choking it. Temperatures in the space drop dramatically in a very short time preserving anyone trapped inside with the flames (see graph).

In most fires large amounts of water are used to smother and quench the flames. The water used by the lance is minimal. Four to eight liters of spray entering the enclosed space of, say, the equivalent of a 40 ft container will drop the temperature from 500°C to less than 100°C in 10-20 seconds.

Enclosed spaces in offshore facilities, engine rooms, pump banks, storage tanks etc. can very quickly become infernos if a piece of equipment catches fire. The large quantity of volatile crude and related hydrocarbons can quickly raise the temperature above survival levels injuring or killing any persons trapped in the enclosure with the fire-involved equipment.

For rescuers, "flashover" can occur if an outer door of the space is opened, letting fresh air in to reach the flames. The resulting explosion can injure additional people and release the fire into a wider space endangering the whole facility. By applying the lance the fire can be quickly controlled.

The jetting system has been adapted also for hole-cutting, creating the Cold Tap, a tool for opening access holes in tanks to remove flammable or explosive gases from flame-heated tanks and pipelines. Remote control of the cutting action ensures personnel safety.

The lance is a simple device, easy to handle , and easy to use. No special protective equipment is needed to operate it making it an excellent device for use by most offshore workers. Since cutting metal is a common practice on offshore facilities, the addition of water-cutting equipment to the metal shop would quickly familiarize workers with the basics of the system.

Several Cobra Cold Cut systems are already in use. After a recent fire fighter convention, two systems were sold to land-based fire companies. Cold Cut Systems (CCS) is talking with the Swedish Navy and the Swedish Ship Owner's Association about the use of the system for defense and general shipping. Williams Offshore has seen the system and is organizing a fire fighting school for training in the shipping industry.

Work is also well under way for certification for the Norwegian Offshore sector as well as by DNV for more general applications.