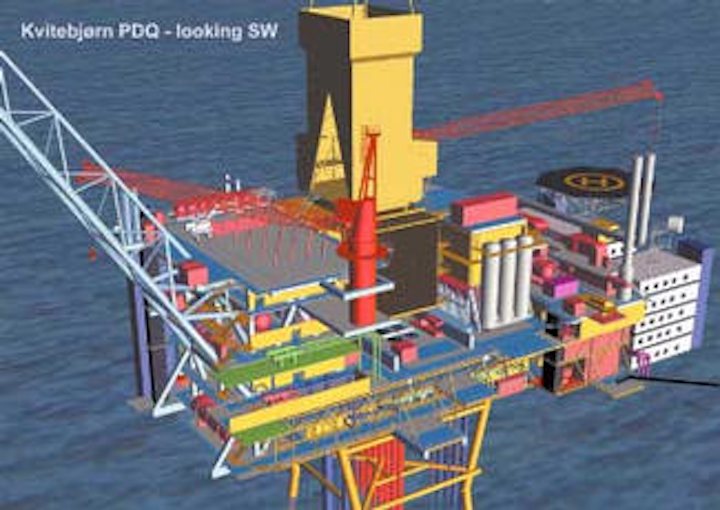 Statoil is tackling the challenges of developing fields with high-pressure, high-temperature (HP/HT) reservoirs in the Norwegian Sea. It has two such fields under development - Huldra and Kvitebjørn - and in August was due to file a plan for operation and development of Kristin, the first of what could be a series of fields in the Halten Bank South area.

HP/HT represents a significant part of Statoil's future, certainly in Norway. The company, which plans to deepen its involvement in the European gas market, is looking to the gas-prone Norwegian Sea as an important source of future supplies. Much of this area's gas potential is thought to be locked up in HP/HT reservoirs. Statoil also has a number of smaller fields in this category, such as Gudrun in the North Sea, where development options are under review following a recent appraisal well.

To provide channels of communication and knowledge transfer between the different projects and departments involved in HP/HT matters, Statoil has its own HP/HT network, headed by project leader Vigdis Bringedal Holst. The company is also a member of the HP/HT Operators' Forum, which provides a valuable meeting-place for discussing HP/HT matters and field experience. Developing close relationships with relevant suppliers and service companies is also important in order to keep them informed of the technical requirements for HP/HT operations and to work with them on developing cost-effective technology to meet the challenges. Statoil recently participated in an SPE seminar arranged for this very purpose, Holst said.

HP/HT reservoirs are at the frontier of development. They pose technical, safety, and environmental challenges to overcome, for which a considerable effort in technology development has been mobilized.

Statoil itself has numerous ongoing research projects. One, at the company's Trondheim research center, is aimed at throwing more light on the role of rock mechanics in HP/HT reservoirs, and how it affects borehole stability over time. A significant drop in reservoir pressure - 100 bar a year - is expected as the reservoir is depleted, and more needs to be known about the impact of this effect on borehole stability, Holst says. Other concerns being tackled at Trond-heim include:

Huldra has thrown up typical HP/HT problems, though strictly speaking it does not fully qualify as an HP/HT field. While its reservoir temperature of 146°C is at the lower limit, initial reservoir pressure of 680 bars is beneath the threshold. Early in the development drilling campaign, a problem arose with sagging in the oil-based mud.

To counter high downhole pressures, the weight of the mud was increased by raising the barite content. However, when the content becomes too high, the barite can fall out of suspension. This effect - sagging - has obvious implications for downhole stability. A way around the problem was found by switching to cesium formate. This is normally used in completions, but has also proved effective during drilling operations on Huldra.

The first well on Huldra suffered a kick when a screen was being installed - possibly due to incorrect mud weight - and had to be shut in. It was sidetracked in May 2001 and has now been flow tested with good results. Meanwhile, by mid-year, two other wells had been drilled and one completed. The wells are being drilled by jackup Mærsk Gallant, which has been upgraded for HP/HT operations, with its rig cantilevered over the Huldra platform. Six wells are planned in total.

The Kvitebjørn wells will also be surface-completed, although they will be drilled using the platform rig following platform installation in summer 2003. A total of 11 wells is planned. In strict definitional terms, Kvitebjørn too is not wholly HP/HT. Its initial reservoir pressure of just below 780 bar is beneath the HP/HT threshold, though the temperature of 150-160°C is above it. The field is being treated as fully HP/HT, says Kvitebjørn Drilling Manager Trond Røsbak.

Close contact is maintained between the Huldra and Kvitebjørn personnel within Statoil's drilling and completions unit to ensure the efficient transfer of the lessons learned on Huldra. One of these is the need to resolve the mud issue. Cesium formate fluid is extremely expensive to use as a drilling mud, so Statoil is now working with service companies to develop an oil-based mud with favorable friction performance.

Kvitebjørn presents typical HP/HT challenges, says Røsbak. One is the very small margin between the pore pressure and the fracture gradient - if the mud weight is not very carefully balanced between the two, well control problems can arise.

Great care has to be taken in predicting pressures, not least the additional pressure being put on the formation through the friction of mud circulation, in selecting the types and volumes of fluids and also the pump speeds. Not only is detailed planning required, but the drilling crew also has to be prepared.

Kristin represents a step up from both Huldra and Kvitebjørn. Its initial reservoir pressure of 911 bar and temperature of 167°C leave no doubt as to its HP/HT qualifications. Lying in deeper waters - 360 meters - than the other fields, Statoil is proposing to develop it with a floating production platform and subsea wells. Kristin is probably the largest HP/HT field in the world to be developed with subsea wells to date, according to the project's drilling manager, Bengt Rasmussen.

The use of subsea wells - 12 are planned - involves additional challenges, Rasmussen says. Subsea wells normally do not have the same facilities as surface-completed wells for monitoring and bleeding off completion fluids left in the well annuli. There is a possibility that when prod-uction begins, the flow of the hot wellstream will raise the temperature and pressure of these fluids, causing them to expand and, if there is no exit route, to endanger the integrity of the casing.

In Kristin's case, access will be required to the annulus between the 10 3/4-in. and 14-in. casing, to enable the fluids to be bled off if necessary, Rasmussen says. Statoil is working with two service companies on this issue, and a solution is now on the drawing board.

The high temperatures in the well will also lead to well growth - thermal expansion of the tubulars by some 10-15 cm. Finding a subsea wellhead with the flexibility to allow for growth of this extent is not an easy matter. Again a solution is being sought in cooperation with relevant suppliers.

Another complicating factor is that both at the stage of completion and during production operations, it is not possible, due to the heave, to deploy a snubbing unit from a floating drilling rig in the event of major problems downhole.

The increased load put on production wells when they come into operation has also been identified as a critical area. Valuable feedback has come to Statoil from operators on the UK side such as Shell and TotalFinaElf, which have recent experience in HP/HT developments. A lot of effort is now being put into the cementing and casing design to ensure that the Kristin wells will be able to withstand these loads.

Another key area is the selection of materials for the well tubulars. For Kristin the choice will be between duplex stainless steel and stainless steel with 13% chrome. If 13% chrome proves suitable, it will also mean a reduced bill. It will also be important to ensure that the requested quality is actually delivered - there have been problems in this respect, Rasmussen says.