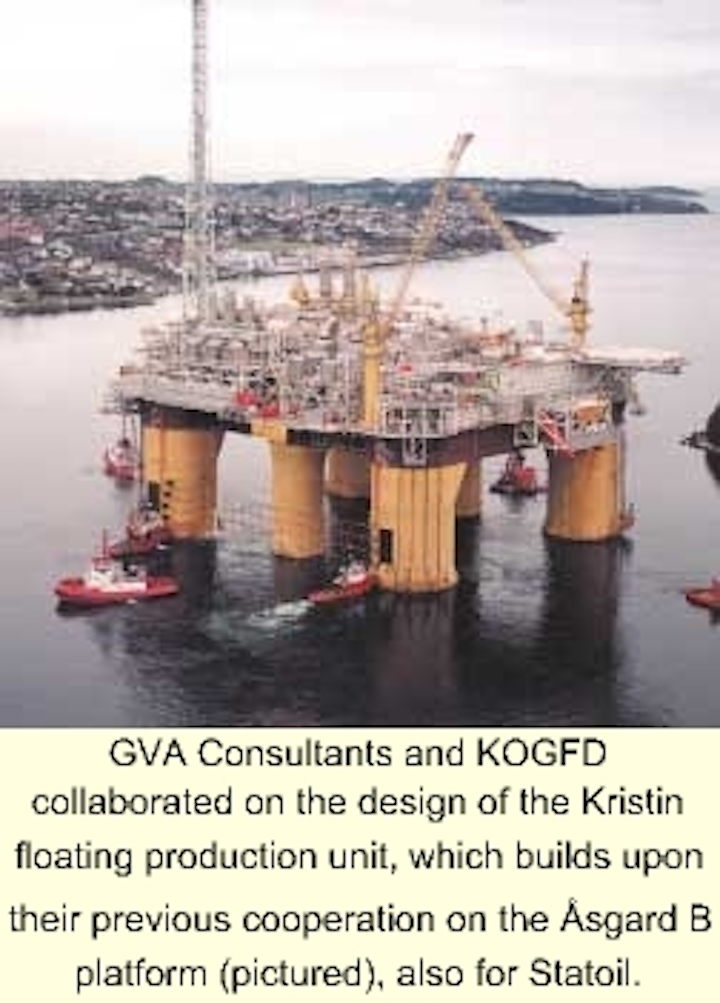 In cooperation with Kvaerner Oil & Gas Field Development (KOGFD), GVA Consultants has completed the front-end engineering design (FEED) for the Kristin floating production unit. This provides the company with its fourth reference in the Norwegian offshore sector. Assuming operator Statoil implements the project, GVA Consultants will contribute their semisubmersible (semi) design and experience to the sixth purpose-built production platform out of 10 such units working around the world, Marketing Manager Robert Ludwigson points out.

The Kristin FEED contract was awarded to KOGFD in July last year. While KOGFD has responsibility for the total contract and platform development, GVA Consultants is responsible for the hull and deck structure, and for naval architectural aspects such as the platform's stability and motions. The two companies previously collaborated on the design of Statoil's Åsgard B gas production platform, the first time a semi-submersible platform has been used for dedicated gas production. That platform was installed on the Norwegian Sea field last year.

Kristin is also a gas platform, but a somewhat smaller unit than Åsgard B, and based on the Kværner GVA50 design. Nevertheless, it will support an impressive production throughput - 17 MMcm/d of gas and 125,000 b/d of condensate. It will have a displacement of some 55,000 tons and a total weight of some 30,000 tons.

"We gained valuable experience working with Kværner and Statoil on Åsgard B, so we know their requirements and the way they think," says project manager Peter Ankarsward. "We are also drawing on our Åsgard B experience for the Kristin design." But Kristin represents a new departure for GVA Consultants in one important respect, as it represents the first time the new Norsok standards have been fully applied to the design and construction of a semisubmersible.

By the end of February, the company was due to have developed the design to the point of main scantling approval.

The result of the FEED work will be incorporated in Statoil's plan for development and operation of the Kristin Field which the operator is planning to submit in spring. Assuming the PDO is approved, the two partners expect to bid for the next phase of the project.

"We see operators' interest in production semis increasing as they begin to realize the cost advantages," Ludwigson says. In particular, there are signs of growing interest in the production and drilling semi, which gives direct access to the wells from the platform without requiring the hire of a separate drilling unit. The company has a successful reference here, in the shape of Norsk Hydro's Visund platform. According to Ludwigson, it may not be long before this concept also makes its mark in the Gulf of Mexico.