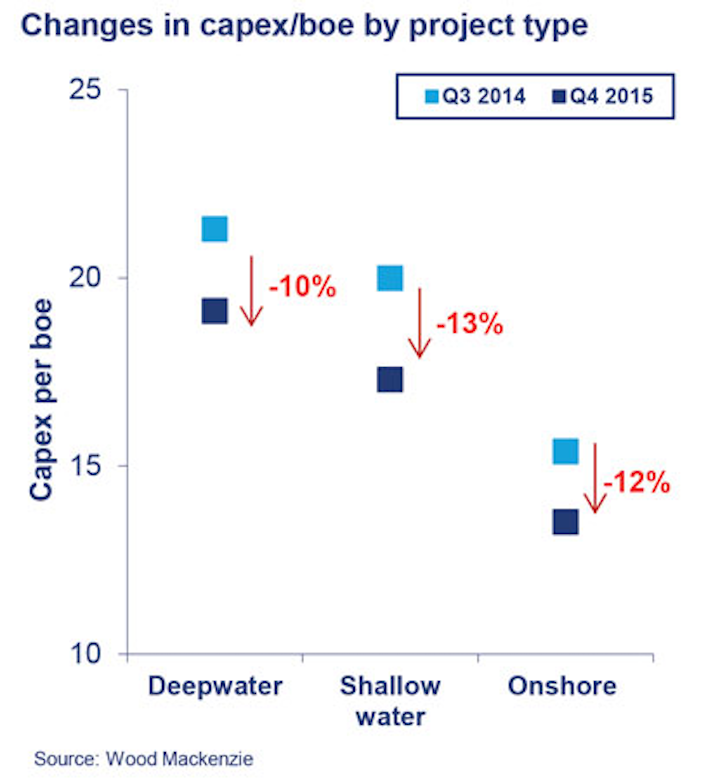 Low oil prices are hitting new deepwater projects hardest as companies find themselves forced to rework developments with high breakevens, large capital requirements, and high costs. A recent analysis from Wood Mackenzie comments that what began in late-2014 as a “haircut” to discretionary spend on exploration and pre-development projects has become “a full surgical operation” to cut out all non-essential operational and capital expenditure.

In the analysis, the consulting firm identified 68 large projects globally that have had their FIDs delayed since the oil price crash in 2014 through to the end of 2015. The list has risen by more than one-third in the last six months, as more and more projects are deferred. Findings include:

“One reason we are seeing a growing list of delayed projects is cost deflation - or to be more accurate, the need for costs to fall more to stimulate investment,” Rodger said. This is where deepwater has made the least gains.

The biggest jump in pre-FID delayed projects over the last six months has been in deepwater, Rodger notes, rising from 17 to 29, where costs have only fallen by around 10% despite the global crash in rig day rates. “Despite the size of these fields, the combination of insufficient cost deflation and significant upfront capital spend has discouraged companies from greenfield investment in the sector,” Rodger observed.

The analysis notes that companies are having to adjust investment strategies to the risk of sustained low prices, and this means tougher screening criteria for pre-FID projects. “We believe that most companies will now be looking for these developments to hit economic hurdle rates at around $60/bbl,” said Tom Ellacott, vice president of corporate analysis for Wood Mackenzie. He noted that if a sector or country cannot meet new investment thresholds and compete for capital, “operators are now more likely to choose divestment over warehousing a stranded resource.” He expects that by 2021, deferred volumes will reach 1.5 MMb/d, rising sharply to 2.9 MM b/d by 2025. 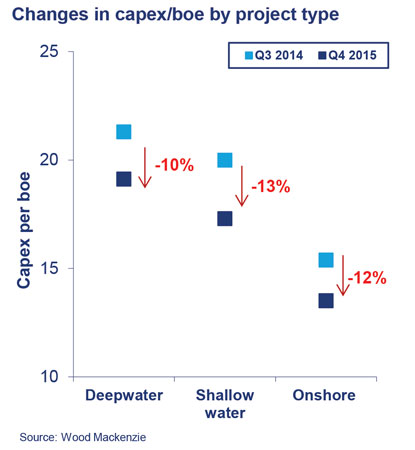 Although FIDs on many projects have been postponed to 2017 or beyond, with first production targeted for 2020-2023, output could be delayed further if prices do not recover and/or costs do not fall enough.

According to the analysis, the countries with the largest inventory of delayed oil projects are Canada, Angola, Kazakhstan, Nigeria, Norway, and the US, which hold nearly 90% of all deferred liquids reserves. This includes oil sands, onshore, shallow-water and deepwater assets in both greenfield and incremental developments. The countries with the largest gas reserves pending development are Mozambique, Australia, Malaysia, and Indonesia, which hold 85% of the total volume. Most of this gas is offshore, mainly in deepwater, and requires complex and expensive development solutions, including greenfield LNG and FLNG.

Wood Mackenzie says it expects oil and gas companies to be forced to go into survival mode during the year ahead, with further project delays and cuts to discretionary investment highly probable.

Yet, even while low oil prices dim prospects for future projects, the market downturn seems to be having little effect on present and near-term production. In February, Wood Mackenzie issued another report that found no sign of significant oil production shut-ins at $35/bbl. In this analysis, the firm determined that less than 0.1% of global production has been halted to date.

The study found that since the dramatic drop in prices from late 2014, there have been few halts in production - with around 100,000 b/d shut-in globally to date. The areas with the largest volumes shut-in so far have been Canada onshore and oil sands, conventional US onshore projects, and some older UK North Sea fields. However, Wood Mackenzie cautioned that the number of shut-ins is unlikely to increase at the rate some might expect, as many producers hold out in the hope of a price rebound.

Stewart Williams, vice president of upstream research at Wood Mackenzie, said that the firm’s latest 2016 production data indicates that with Brent crude oil prices at $35/bbl, some 3.4 MMb/d of oil production is cash negative, which equates to 3.5% of global supply (96.1 MMb/d). “Since the drop in oil prices from late 2014,” Williams noted, “there have been relatively few production shut-ins, with less than 0.1% of global production halted so far - around 100,000 b/d globally.”

So why aren’t producers turning off the taps? Robert Plummer, vice president of investment research at Wood Mackenzie, explained that “being cash negative simply means that production costs are higher than the price that the producer receives and does not necessarily mean that production will be halted altogether.” Curtailed budgets have slowed investment which will reduce future volumes, but he says that there is little evidence of production shut-ins for economic reasons.

“Given the cost of restarting production, many producers will continue to take the loss in the hope of a rebound in prices,” Plummer observed. He also noted that in terms of Wood Mackenzie’s current oil price forecast, the firm had recently revised its annual average to $41/bbl for Brent crude in 2016. “The operator’s first response is usually to store production in the hope that the oil can be sold when the price recovers,” Plummer commented. “For others, the decision to halt production is more complex, and we expect that volumes are more likely to be impacted where mechanical or maintenance issues arise and operators can’t rationalize further investment at current prices.”