Fugro has announced a partnership with the Shell Ocean Discovery XPRIZE to support first round testing of the global, three-year competition, which incentivizes the development of rapid, unmanned and high-resolution ocean mapping technologies. 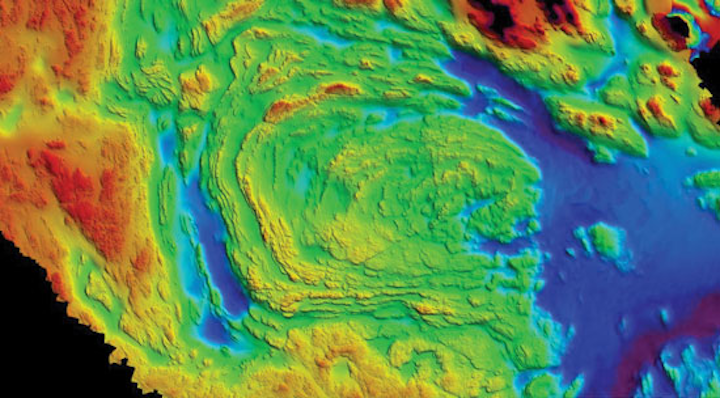 Fugro has announced a partnership with the Shell Ocean Discovery XPRIZE to support first round testing of the global, three-year competition, which incentivizes the development of rapid, unmanned and high-resolution ocean mapping technologies. Its role is to provide high-resolution deepwater baseline bathymetry data over a 500 sq km (193 sq mi) competition area. The company said it has recently collected more than 1 million sq km (386,102 sq mi) of high-resolution bathymetry data per year globally, predominantly in water depths greater than 750 m (2.460 ft).

The company will acquire the seafloor data using techniques and equipment including a deepwater autonomous underwater vehicle (AUV) equipped with sonar-based survey systems. This information will be used to ground-truth the work of 21 semi-finalist teams advancing to Round 1 of the competition. The challenge for the competing teams is to deploy their inventions to operate at 2,000 m (6,561 ft) ocean depth, mapping 20% of the project site at 5 m (16 ft) resolution, and identifying at least five archaeological, biological, or geological features, all within a 16-hour timeframe.

In addition to increasing the speeds and methods by which baseline bathymetry could be acquired, the competition offers a monetary incentive sponsored by the US National Oceanic and Atmospheric Administration for systems that can also detect and track biological and chemical signals. Such advancements would improve emergency response and foster the discovery and monitoring of new marine life and underwater communities, Fugro said.

First round testing for semi-finalist teams is scheduled to commence in September. Fugro will acquire, process, and deliver the datasets in advance.

ExxonMobil, working with the National Center for Supercomputing Applications (NCSA), said it has achieved a breakthrough with proprietary software using more than four times the previous number of processors used on complex oil and gas reservoir simulation models to improve exploration and production results.

The breakthrough in parallel simulation used 716,800 processors, the equivalent of harnessing the power of 22,400 computers with 32 processors per computer. What ExxonMobil called a “record run” is said to have resulted in data output thousands of times faster than typical oil and gas industry reservoir simulation. It is expected to result in reductions in the amount of time previously taken to study reservoirs.

ExxonMobil’s scientists worked closely with the NCSA to benchmark a series of multi-million to billion cell models on NCSA’s Blue Waters super computer. This new reservoir simulation capability efficiently uses hundreds of thousands of processors simultaneously and will have impact on reservoir management workflows.

ExxonMobil said its collaboration with the NCSA required careful planning and optimization of all aspects of the reservoir simulator from input/output to improving communications across hundreds of thousands of processors. These efforts have delivered strong scalability on several processor counts ranging from more than 1,000 to nearly 717,000, the latter being the full capacity of NCSA’s Cray XE6 system.

TGS was awarded the Otos multibeam and seep study project in the US Gulf of Mexico. Acquisition of the multibeam survey is underway and is the first stage of a seep and geochemistry program covering the US GoM. The survey is designed to mirror the Gigante multibeam and seep study in the Mexican side of the GoM, conducted in 2016. The new program will cover approximately 289,000 sq km (111,583 sq mi) and include 250 cores with advanced geochemistry analysis. TGS will continue to work with the same acquisition providers as in the Mexico program, Fugro (multibeam) and TDI Brooks (coring and geochemical analysis). Final results in all areas should be available in late 2017.

Previous to that, the company landed its first new multi-client acquisition project in 2017, AM17 Atlantic Margin 3D in the Norwegian Sea. AM17 is a 40,000 sq km (15,444 sq mi) project in the central-southern Norwegian Sea. The project is the single largest 3D survey carried out by any company in northern Europe and covers largely open blocks in a relatively under-explored area with limited drilling to date. New understanding of the geological development of the area opens up a variety of play models from rotated Jurassic and Cretaceous fault blocks, to stratigraphic and structural traps in Paleocene and Cretaceous turbidite/fan deposits. Acquisition is expected to commence in May and will continue over multiple seasons. Data processing will be performed by TGS using its Clari-FiTM broadband technology and advanced denoise and demultiple techniques. Both projects are supported with industry funding.

CGG has completed acquisition and processing of what it claims is the first airborne gravity gradiometry (AGG) survey over the Kingdom of Bahrain. The company performed the survey on behalf of the Bahrain Petroleum Co. (Bapco) using FalconPlus, the newest release and the lowest-noise of CGG’s suite of Falcon AGG systems.

Bapco and future license holders can make use of the results to evaluate the offshore hydrocarbon potential and identify exploration priorities ahead of future licensing rounds. CGG will work with Bapco on an integrated study that will combine the AGG data with existing seismic, well, and other geological information.