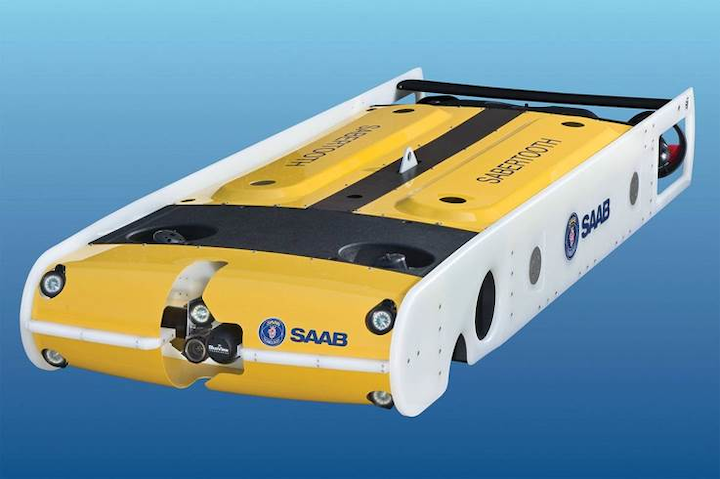 As a result of this collaboration, Clean Sea has developed the Sabertooth hybrid AUV/ROV from Saab Seaeye for the purpose. The resulting autonomous vehicle can accept interchangeable modules and has the 360° maneuvrability and hovering characteristics necessary to operate around structures during inspection and monitoring tasks.

Fitting the concept of interchangeable modules that the Clean Sea team called, E-PODs, is made possible through the open interface architecture of the Sabertooth.

Each E-POD module is dedicated to a particular task that can include automatic water sampling, hydrocarbon leakage detection, chemical analysis, visual inspection and acoustic surveying.

In developing their concept, the Clean Sea team has taken advantage of the Sabertooth’s technology architecture.

For example, the vehicle’s system of “reactive control” will modify a preprogramed mission in real-time so that if a leak is detected the vehicle can autonomously locate the leak by subsequent analysis of gas measurements and move towards the leak source and film it.

The hovering characteristic of the Sabertooth makes it possible to operate from docking stations, where data can be exchanged, either on wireless flyby, or direct docking, and where batteries can also be re-charged and interchangeable instrument modules attached remotely for various missions.

Having successfully demonstrated the potential of Clean Sea technology during field tests on environmental monitoring, the team plan a second phase of field tests to demonstrate the more complex functions of asset integrity tasks.

In the future, the Clean Sea team see the potential to put EPods on the seabed alongside the Sabertooth at its remote underwater docking station, where it will remain as long as a year awaiting deployment as needed. This will give year-round access to locations normally inaccessible due to ice or harsh weather, and offer safer monitoring in geographical regions prone to insecurity.