Fugro is launching an upgrade to its electric ROV pilot training simulators. 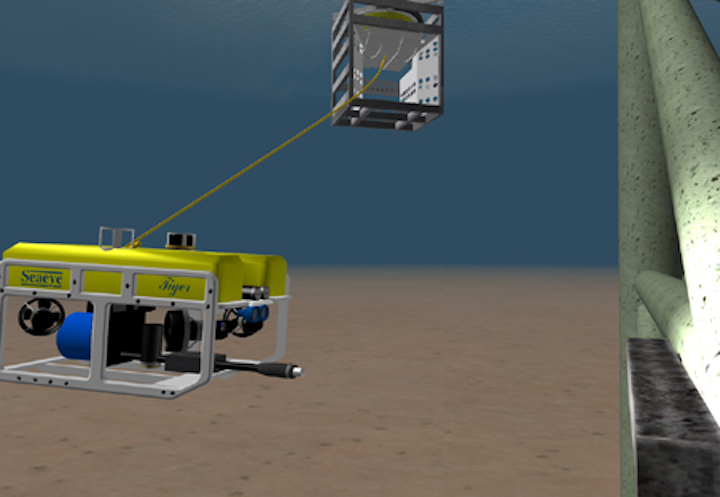 Most observation-class ROVs and many light work-class ROVs are electrical-based systems. With the introduction of a new electric ROV control pod and suite of electric ROV specific components, Fugro’s DeepWorks simulation software now models all electric subsystems with greater accuracy and enables failure cases to be simulated on individual sensors and circuits. This extends the range of training scenarios and allows new vehicle configurations to be assembled in a way that reflects their true circuit diagrams for more transparent testing and validation in the simulator before the vehicle enters service.

A new overlay designer has been added to the ROV simulator’s runtime tools, allowing both scenario builders and training supervisors to quickly configure and manage overlays. The overlay designer displays navigation and sensor information in exactly the same way as the real vehicle system. Crucial instrumentation data (such as heading, pitch, and roll, as well as camera tilt angle) reach the overlay through the control pod.

A new cathodic protection (CP) measurement probe has been added. This contactless, half-cell probe provides real-time CP measurement of both subsea pipelines and structures and can be deployed by either ROVs or divers. A virtual CP field is detected by the probe and continuously displayed via the overlay and recorded within the simulation data for post-mission analysis.

“To be able to connect up a vehicle’s sub-systems through junction boxes and valve packs in the same way as the real vehicle puts us in a much stronger position to train not just piloting skills but also vehicle assembly and fault finding in a simulated environment,” said Dr. Jason Tisdall, business line manager for Fugro Robotic Technologies. “This way, we can arm ROV designers and pilot technicians with a broader skillset.”