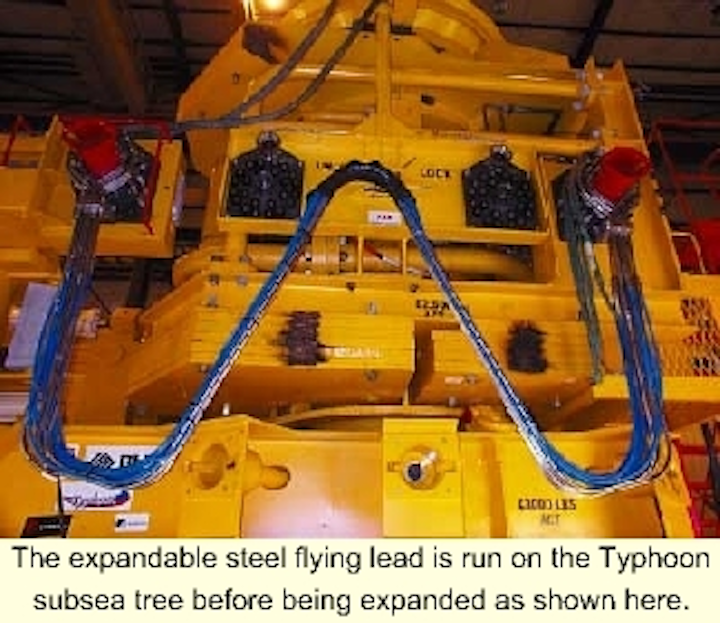 ABB Offshore Systems has successfully tested an expandable steel flying lead that will be run on the subsea tree for Chevron's Typhoon project in the Gulf of Mexico. A flying lead is the critical but flexible control segment that connects the umbilical with the subsea tree. The segment must be maneuverable, so that it can be connected and disconnected from the subsea tree.

Typically, when an expandable flying lead is installed offshore, it is made of thermoplastic hose. While stainless steel is the preferred material for transporting certain chemicals, it has proven difficult to design a steel tubular lead that can handle the deflection required during installation.

Short leads have proven to be more difficult to design than long leads. With a longer lead, the deflections are not as extreme. In fact, there have been several steel flying leads installed successfully covering as much as 150 ft.

In such a case, where the deflection is much less of a percentage of the total length, it is mainly a matter of handling such a long piece of steel tube. On Typhoon, the entire deflection is only 36-in. the material was dictated by the project, meaning it had to be weldable and one of the lengths had to be made of super duplex steel, said Dave Hanks, Production Control Systems Manager for ABB Offshore Systems.

When a subsea christmas tree is initially installed, it is run on a special tool. Once the tree is landed and hooked up, it must be tested. This testing ensures everything on the tree works properly before the running tool is pulled. If there is a problem, this is the easiest time to detect and deal with it. The tree is controlled from a plate on its side. The plate has a number of male connectors, a box assembly to guide the lead termination in, and a threaded box to make up the connection. On Typhoon, there are three of these plates, one is live and the other two are parking plates. When the tree is run, the flying lead is connected to the two parking plates. Once the tree is landed and hooked up, a remotely operated vehicle (ROV) flies down to connect a temporary lead to the wellhead for testing, using power from the rig on the surface.

Once the testing is complete, this lead is removed. One termination end of the permanent lead is then disconnected from its parking plate and deflected by the ROV to its permanent hookup. A cover is then installed to protect the parking plate from the elements.

When the stab and hinge-over umbilical termination header is installed on the Typhoon field, sometime in early 2001, the ROV will return to hook up the other end of the lead. This will require a 36-in. expansion of the lead to connect power and chemical lines from the umbilical to the tree.

Running the flying lead parked on the tree saves trip time during installation, Hanks said. Also, if there is a problem with the lead in the future, it can be returned to its parking place and be pulled with minimum trouble.

According to Hanks, tubular steel lead lines were built into the specifications of the job. The wall thickness and type of steel were also dictated. ABB was not in charge of choosing the materials, only designing a lead that would work with the steel they were required to use.

Thermoplastic leads are flexible, coil up nicely, and can handle the hydraulic fluids required to operate a direct hydraulic system such as the one on Typhoon. Thermoplastic has also been used for transporting paraffin and corrosion inhibitors. Traditionally, thermoplastic has been the material of choice for a design like this one. But that is starting to change. According to Hanks, there is a move away from thermoplastic leads for chemicals such as methanol and corrosion inhibitors. These chemicals can damage and permeate the plastic tubes.

When direct hydraulics are used, there is a possible delay in the signal as the thermoplastic lead first expands before transmitting the hydraulic signal. Steel leads eliminate this problem.

For Typhoon, a compromise was reached between the materials. The critical functions, six hydraulic line and five chemical lines, were made of stainless steel, while the remaining nine lines were thermoplastic. The additional flexibility of the thermoplastic lines was critical to the success of the expandable lead. Hanks said the lead had to be retrievable.

This meant it not only had to deflect to connect the subsea tree with the umbilical termination header, but needed the flexibility to return to its original running slots on the tree, if it had to be pulled. Using the materials and sizes given to them ABB did some stress analysis and came up with some initial designs. Hanks said some of these were very wavy, but the ultimate design is more of a "W" shape.

A number of the designs ABB tried used all stainless steel lines. Some of these designs would deflect for the initial hook up, but would not return to their original shape. At one point, ABB consulted with a company that had built longer steel flying leads. When ABB asked about the possibility of designing one for a 36-in. deflection, they were told "good luck" Hanks said.

Another key problem to overcome was the risk of over-deflection. If the tubing is bent too far during expansion it will not return properly to it original shape. To avoid this, an umbilical was attached to the end of the lead that would not allow it to be over-deflected.

Once ABB had a design it was comfortable with, it built a mock-up of the landing plates and put the whole thing in a test tank. The tank test allowed ABB to deflect the leads from the running plates to the hook-up plates and then return them to the original position.

Hanks said his team is confident this lead will perform as required when it is deflected for hook-up of the UTA next year. Because the design ABB settled on is robust, Hanks said it will work on projects in water depths up to 5,000 ft. Typhoon is near the limits of direct hydraulics - about 2,000 ft water depth.