Pumps and compressors installed on the seabed, near the wellhead, can help operators squeeze more out of existing reservoirs or develop new wells in previously unworkable areas. Using a long step-out system, power can be extended from the surface or even from an onshore facility, improving the efficiency and the economics of the installation. 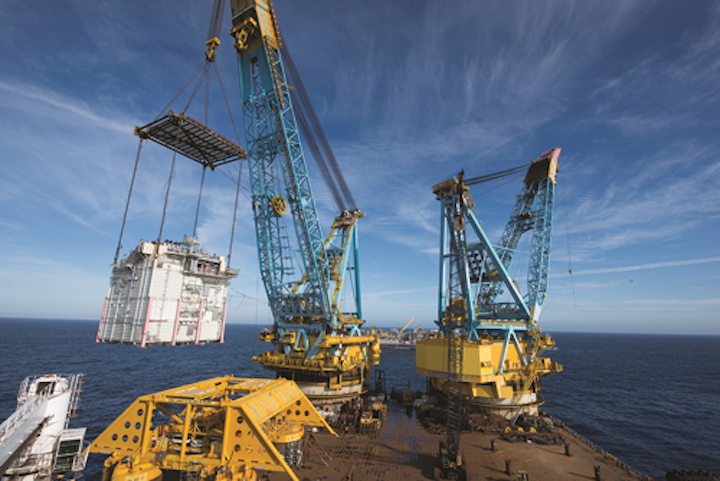 Pumps and compressors installed on the seabed, near the wellhead, can help operators squeeze more out of existing reservoirs or develop new wells in previously unworkable areas. Using a long step-out system, power can be extended from the surface or even from an onshore facility, improving the efficiency and the economics of the installation.

The life of oil and gas reservoirs can be substantially extended by placing entire production lines, with pumps and compressors, on the seabed, powered either from a platform at the surface, or from a shore-based installation. Power supplies more than 40 km (25 mi) long and installations at a depth of 1,000 m (3,280 ft) have already been achieved. Soon, a completed subsea power distribution substation at a depth of up to 3,000 m (9,842 ft) will be possible, able to supply up to 100 megawatts (MW) of power over distances as far as 600 km (373 mi).

This has become more relevant in recent years. With an austerity culture still pervading, even though the price of oil and gas have recovered somewhat, there is still a focus on exploiting facilities and getting more from existing wells. 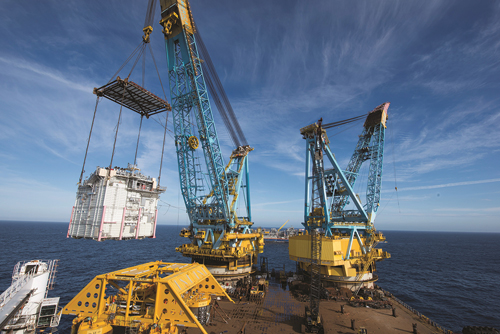 The variable speed drive is fitted in the topsides installation, but in the future subsea VSDs will become a reality. (Photo credit: Øyvind Hagen/courtesy Equinor)

Using what is known as a long step-out system, power can be supplied from the surface to pumps and compressors on the seabed to help boost the pressure inside the reservoir and increase the flow in the pipelines.

Existing rigs can be used as a hub, with gas recompression equipment on the seabed. Alternatively, it may be possible to operate the installation from an onshore location.

By moving pumps and compressors to the seabed, the number of people needed to work on the offshore platform is also reduced, cutting labor costs and improving safety. 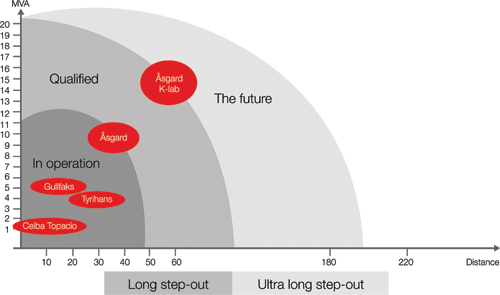 Long step-out systems use a long umbilical to supply power from a variable speed drive (VSD), located at the surface, to the equipment on the seabed.

The VSD enables the operator to control the speed of the equipment, ensuring that the installation has the flexibility to cope with variations in demand, production rate, and technical requirements over time.

The VSD provides accurate control. Based on the current and frequency supplied by the VSD, it is possible to calculate the motor speed and torque produced with a high degree of accuracy. This provides a far more robust system than using a feedback loop from the motor, which would add vulnerability to the system.

However, a very long motor cable causes several issues. Normally, a VSD in a standard industrial application is located no more than a few hundred meters from the driven load and frequently right next to it. Even in regular, onshore installations, long motor cables can be problematic. The cable acts as a capacitor and a long cable has a considerable effect. The cable will also have an inductance. Both these forces need to be carefully managed.

In long step-out systems, where the distance is many kilometers long, these issues are exacerbated. This places special demands on the electrical design of the system. The challenges are considerable, but they can be successfully managed. 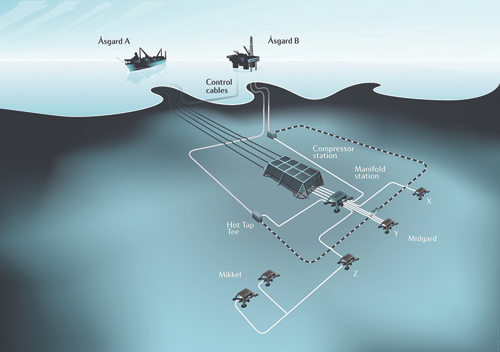 In addition, the losses in the cable need to be controlled. To mitigate the losses and voltage drop, a step-up transformer is located with the VSD at the surface and a corresponding step-down transformer sits on the seabed next to the driven equipment. The elevated voltage reduces the cable losses.

In addition to the losses that are due to the length of the cable, further losses are caused by the high frequency in the supply. The VSD controls motor speed by varying the frequency. A higher frequency means higher motor speed; however, an increase in frequency significantly increases the cable losses. This is due to a skin effect inside the cable, caused by the high frequency, which forces the current to travel in a smaller cross section of the core, resulting in higher resistance.

Furthermore, the capacitance and inductance of the cable need to be carefully managed with the VSD out-put voltage waveform to avoid exiting the resonances in the electrical system. This is one of the greatest challenges in a long step-out system, as the system displays the same features as an electrical circuit with inductors and capacitors. Resonant circuits can exhibit ringing and may generate high voltages and currents due to certain harmonics being amplified through the system. This is a form of electrical pollution that can cause problems if it goes beyond certain limits. A harmonic current is one with a frequency at a multiple of the fundamental frequency. For instance, a 250 Hertz (Hz) current on a 50 Hz network is the fifth harmonic. The 250 Hz current represents energy that cannot be used by devices on the network. Harmonics increase power losses and winding temperature, degrading the conductors and insulation materials. 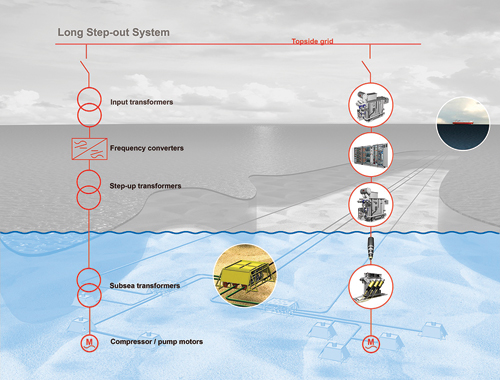 In a typical long step-out power system, the load is either a subsea pump or compressor. Step-up transformers raise the voltage level and increase the maximum electric power and length of transmission. The subsea step-down transformer is installed close to the subsea load.

But with a thorough analysis and optimization of the individual VSD system, the harmonics can be reduced to a level where they no longer cause a problem. In long step-out systems with shorter cables, this is traditionally done by using sinefilter on the output of the drive. In step-out systems with longer cables, the VSD out-put voltage can be optimized to utilize the dampening of the cable without use of filter, reducing complexity, saving space and cost topsides.

All these issues are checked and the solutions tested during qualification of the system. The motor is tried out with the VSD, using a cable simulator, to confirm electrical stability for a range of operating conditions.

The distance between the production unit and the subsea pump or compressor, as well as the required power, has increased over the years. The first systems delivered by ABB, for the Topaicio and Ceiba fields around the turn of the millennium, were rated at about 1 MW with a step-out distance of around 7-9 km (4-6 mi). Now, at the Åsgard project, long step-out systems are delivering up to 20 MVA electric power to loads at a distance of 43 km (27 mi). This is the world’s first subsea gas compressor system and it is predicted to enable the extraction of an additional 306 MMboe, corresponding to a medium-sized field on the Norwegian shelf.

Additionally, ABB is developing a new subsea power solution in cooperation with Equinor (formerly Statoil), which will be able to transmit power from shore up to 100 MW over distances up to 600 km, to power equipment at depths up to 3,000 m. The objective is to develop a complete subsea power distribution center with transformer, switchgear, and VSDs. This will enable operators to develop fields considerably deeper and more remote than today.

With long step-out systems, operators will be able to squeeze out more from existing reservoirs and maintain high levels of production. It will also be possible to develop difficult, previously unworkable fields while achieving more accurate control over the subsea system.

In the coming years, it will become possible to have subsea VSDs close to the load. This will enable the design of a longer step-out. While 90% of the existing demand for brownfield long step-out solutions is within 40 km, feasibility studies have shown that systems more than 120 km (75 mi) are attainable. •