Offshore pipelines and risers are under constant risk of damage. When an operator chooses to pursue a pipe intervention operation, whether planned or emergency repair, there are a number of steps to help assess, critique and select the correct method with which to proceed. A key repair solution to consider is permanent weldless remote-operated intervention which focuses on the full structural capacity of the pipeline, as well as secure sealing of the leak. 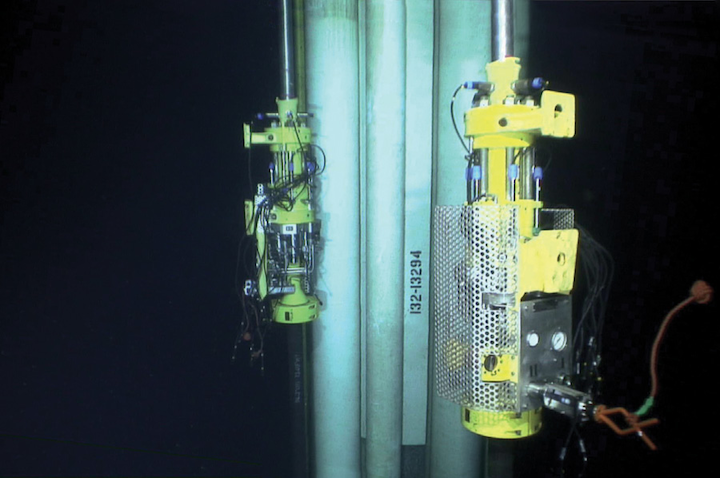 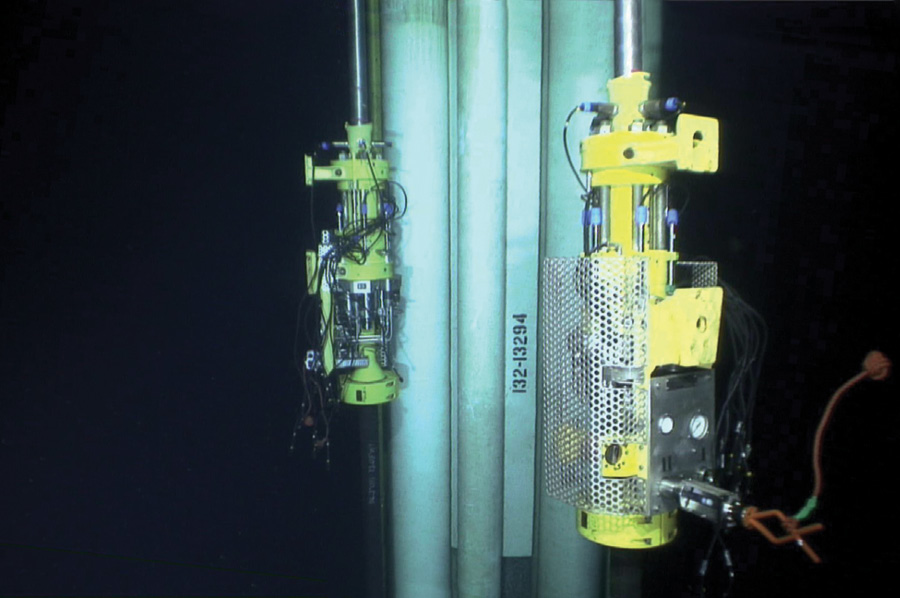 Offshore pipelines are under constant risk of damage. The most recent Pipeline and Riser Loss of Containment (PARLOC) report by Oil & Gas UK and the Energy Institute details incidents over a 12-year period from 2001 to 2012 in the UKCS. It found 183 loss of containment incidents and 23 near-miss occurrences across 1,372 steel pipelines and risers and 1,288 flexible pipelines and risers in the UK sector of the North Sea, west of Shetland, and eastern Irish Sea.

The need for subsea pipeline repair and maintenance is not always limited to the results of unexpected damage through failure to protect; the need can also come from future field/life extensions or subsea bypass operations during decommissioning. Additionally, as oil and gas production extends into harsher and ever deeper environments, new challenges are constantly emerging. These include technical issues such as pipeline material selection, manufacture and installation, well fluid compositions, along with increasing pressures and temperatures and other infield demands.

When an operator chooses to pursue a pipe intervention operation, whether planned or emergency repair, there are a number of steps to help assess, critique, and select the correct method with which to proceed. A key repair solution to consider is permanent weldless remote-operated intervention which focuses on the full structural capacity of the pipeline, as well as secure sealing of the leak.

In the past, pipeline operators have been reluctant to execute deepwater riser repair due to the complexity of the task, and lack of availability of solutions with a reliable track record.

The riser was part of a facility located offshore Angola. At 1,300-m water depth, the companies performed a bypass on two 4-in. gas lift risers at the base of a single hybrid riser tower. This system connected the field’s FPSO vessel to the subsea flowline and control systems.

The field has been in production for a decade and damage was caused to the riser during the original deepwater installation operation. The operator had considered replacing the entire gas lift riser or local repair and bypass of the damaged section. The latter option was selected. As the risers were secured in the bundle near the base of the tower, this required an economical and novel alternative to riser replacement, deployable in a restricted environment, 50 m above the seabed. The project scope began in April 2015 and was completed two years later.

While remote mechanical connectors are a proven method of repairing rigid pipes and risers in deepwater, the challenge lay not with the design of the permanent repair method, but the means of installation without support from the surface or the seabed and without overstressing the riser.

The solution comprised a novel midwater connector installation system controlled from an ROV that is temporarily fixed to the riser and used to align, install, activate and test the repair connectors.

In order to deploy the connectors, the damaged pipe was released from the riser bundle, the coating removed and the correct cuts made. The connector was then aligned, installed, activated, and tested allowing the new flexible jumper bypass to be attached on the damaged sections on the two 4-in. gas lift risers. To support the repair, a high-load structural clamp was permanently fixed to the riser bundle, providing a means to limit the motion of the new repair spools.

Full tooling included the provision of high load clamps and remote clamp installation tools, the coating removal tools, 3D buoyancy-milling tool, the connectors and the alignment and installation frames. All equipment was ROV-compatible and supported with ROV skid and control systems. The use of a metal graphite composite seal was a key differentiator as it has been proven superior to an elastomeric seal.

The project required an eight-week extended factory acceptance test program at an independent facility. This stage included 12 pipe activations, hydrotests, gas tests, temperature/pressure cycling and external load application. The connectors then underwent site integration testing in Norway before shallow water testing involving the use of an ROV to remotely activate and hydrotest the complete system. Video animation was provided to detail each step of the repair process and showcase the planned operations to mitigate any risks at an early stage. 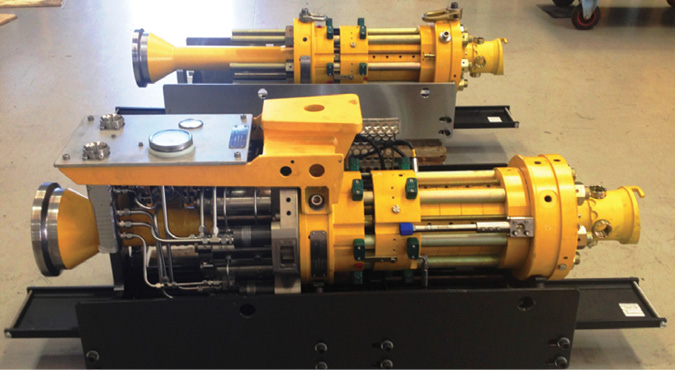 Above: Vertical riser repair solution ready for factory acceptance testing. Below: 4-in. clamp in preparation for deployment from vessel offshore Australia. 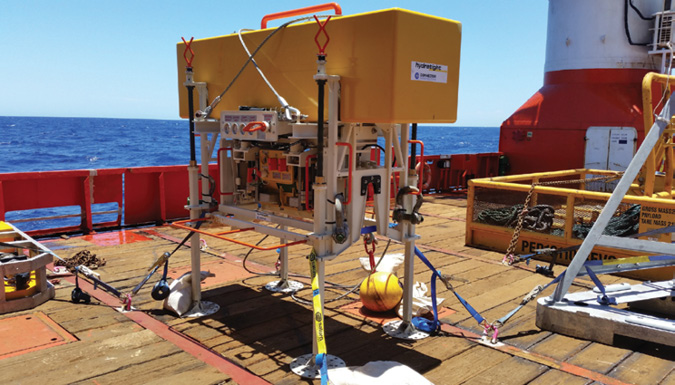 Once on location, the system was deployed over a one-month timeframe during favourable weather windows, leading to the successful repair of both risers in April 2017.

Once the repairs were completed, a bespoke restraining system was installed to support the tie-in location and to avoid any potential fatigue related issues over the remaining lifetime of the risers. A buoyancy removal tool was developed to mill away the buoyancy around a nearby 12-in. riser to create a space envelope sufficient for subsequent coating removal and the remote installation of the structural restraint clamp.

A fracture was detected on a 4-in. MEG line in 830 m (2,723 ft) water depth, pressure-rated up to 400 bar (5,801 psi) which required urgent repair. The operator required a permanent, field-proven repair, again on a short lead-time.

Due to the location and environment, the entire project had to be carried out remotely using ROV compatible tooling. Furthermore, the weight of the repair had to be minimal so as to not overstress the pipe.

The need for a high-pressure repair conflicts with the requirement for a low-weight solution. Typically, in order to achieve a high seal pressure the seal needs to be put under a very high load stress. The load is then normally transferred through bolting: the higher the load, the larger the bolting and the surrounding material to react from.

To overcome this challenge, the contractors designed, manufactured, and installed an innovative diverless structural deepwater pipeline repair clamp especially for use in high-pressure environments. The clamp was designed to operate without the need for bolt tensioning. All activation system technologies and hydraulics were housed within a separate retrievable tool to reduce weight, fatigue and cost and was removed on completion. This would ensure that the fracture was repaired rapidly and with minimal impact on the underwater environment.

Prior to deployment, the clamp underwent extensive pressure-testing to exceed the 400 bar requirement.

Before the clamp was installed, the pipe was prepared using a new, high performance ROV-based coating removal tool to ensure the interface between the pipe and clamp was as required, and that all sea-growth, debris and the original protective coating was removed to provide a clean surface for the repair.

All equipment and tooling was shipped to the location and once lowered from the deck of the support vessel, the coating removal tool was locked onto the pipe. With the pipework’s protective coating removed, the installation tool and clamp were slotted onto the pipe and the clamp installed.

After final pressure testing and verification of the seal, the installation tool was successfully removed with the repair clamp left as a permanent repair on the pipe. It is designed to last 25 years in service. Deployment of the structural deepwater pipeline repair clamp makes it possible to repair pipeline fractures in previously hard-to-reach areas faster and with lower risks than was previously the case.

The root cause of the repair, location and extent of the damage will vary widely from project to project. In any case, early engagement with the OEMs or third-party design houses to assess potential solutions on the market are essential at an early stage to ensure all potential repair options are available to be considered.

Once the operator has a preference for the repair solution, consideration for the installation requirements can then be addressed. To mitigate operational risk, the key interface points between the repair products and the original assets must also be considered. These include the straightness of the pipe, coating removal and the pipe cut and end preparation (bevelling).

To ensure successful recommissioning following pipeline repair, it is vitally important that the foundations of the repair strategy are sound. This means that no aspect of the repair should be assumed until the prior step/assessment is complete. With all pipeline repairs, this should encompass root cause analysis of the damage, understanding of the location, geography and environment, and assessing the technical requirements of the pipeline system predicting future field life.