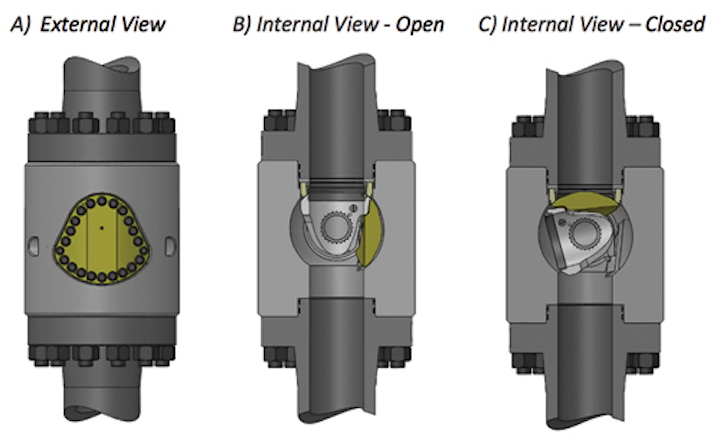 Offshore operators are seeking new techniques that can help them access deeper, hotter, larger bore wells and handle more aggressive hydrocarbons. Until now, one of the main constraints has been the design of the well control and intervention safety valves protecting those operations, personnel and the environment.

Interventek has responded to these concerns with the Revolution valve – a subsea shear and seal safety valve re-engineered from the ground up to address the historical shortcomings of older technology. It is designed to provide a critical line of defense for subsea well completion and intervention operations, cutting slick line, wireline, braided electric cable, coiled tubing, coiled tubing with braided electric cable, and containing well pressure should the need arise. 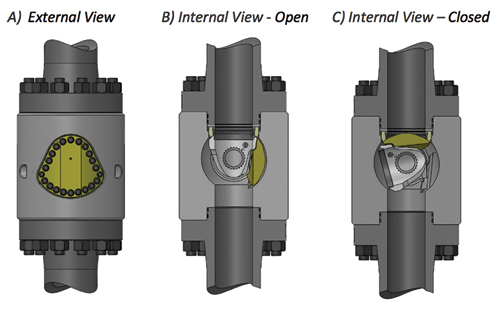 There are currently two main types of shear and seal safety valves on the market – ball valves and shear rams. Ball valves are used typically for shear and seal in well control operations and were never originally designed as a cutting tool. During the cutting process they are often prone to damage which compromises their sealing capability. To ensure adequate protection they are always deployed in multiple stacks - a costly and cumbersome arrangement. Ball valves can also be limited in their ability to cut coiled tubing or coiled tubing complete with braided electric line. And the progression to larger bore, high temperature, high pressure wells, and new regulatory requirements in API 17G - particularly around fatigue capacity - are highlighting their shortcomings.

The other conventional option has been to use a shear ram or gate valve type device which provides incredibly strong cutting capability, but which typically employs elastomeric seals for containment of wellbore fluids, with limited temperature, gas service and life performance. These solutions are large, heavy and cumbersome, with projecting cylindrical actuators, rendering them unsuitable for riserless and certain slim-line open-water applications where wellhead fatigue is an issue or where space is restricted.

The Revolution valve, with its original concept rotary action, has numerous applications, but there are two key areas where it can significantly out-perform other solutions. For HP/HT well completion operations, it can be incorporated into an ultra-deepwater in-riser landing string system to rapidly shut in the well and allow the drilling vessel to quickly disconnect in an emergency situation. The in-riser valve is rated at either 15,000 psi (1,034 bar) or 20,000 psi (1,379 bar) working pressure and is API 17G-compliant. This is a world first and no other valve can currently meet these rigorous specifications.

Major cost reductions can be achieved due to the simplicity of the design, the materials used in manufacture, and its ease of maintenance and aftercare; elimination of the need for multiple valves; and the more cost-efficient intervention it provides for in-riser or open water applications due to the valve’s lightweight compact design. It can shear and seal in one movement, and crucially, the shear and seal elements are independent of each other, guaranteeing a fail-safe seal so that only a single valve is required rather than a stack or series. Its elastomer- free, resilient sealing can operate in deepwater, HP/HT environments, exceeding the capability of all other comparable products on the market.

Separating the shearing and sealing functionalities also means that each component can be optimized for its intended purpose. Intervention media, which come in a variety of forms, present different challenges to a shearing device. Slickline is exceptionally hard, while braided cable is comprised of very small, individual strands and coiled tubing is both geometrically substantial and exceptionally strong. To be effective across all these media types a shearing device must be strong, hard, sharp and closely toleranced. The dedicated shearing components in the Revolution valve allow it to cut intervention media up to and including 2-in. OD, 0.203-in. wall thickness, 147-KSI tensile strength coiled tubing, while remaining compact and lightweight.

Optimized cutting edges provide the hardness, strength and sharpness required to repeatedly cut various media types. The device can maintain an optimized, close shearing action with no risk that the cutting edges might separate and allow fibrous braided media in particular to lie across the seat. During development testing, the 15K psi and 20K psi valves repeatedly cut multiple samples of slickline, braided cable and coiled tubing, confirming the device’s shearing ability.

Compared with tandem valve arrangements which provide shearing and sealing in two separate devices, a single Revolution valve is lower in cost and smaller in form – while the capability to perform shear and seal in one device eliminates the need for any intermediate, typically manually initiated, step of removing the obstruction from lying across a second sealing valve. This simplifies operations and improves safety.

Another innovation is the device’s compact, high torque, fractional turn rotary actuators. In-riser, subsea equipment must function in an extremely confined envelope, so mechanical efficiency is paramount. The shearing action in-riser provided by the valve is essentially rotational in nature and the most effective means to provide the required force is a directly acting rotary actuator. The device uses two such actuators located on either side of the body and these are directly connected to the saddle via stout torque shafts. They are rated for 10,000-psi (689-bar) working pressure and develop sufficient force for shearing all common sizes of coiled tubing. Their total fluid requirement is only 1.5 liters, and by locating the actuators on the outside of the device, the hydraulics are separated from the wellbore fluids. This ensures that the actuator seals operate in only a clean hydraulic environment, enhancing the valve’s reliability. In early testing, the device has operated over thousands of cycles and has continued to deliver acceptable performance. Control system requirements are also much simplified, as the 10K psi pressure rating of control lines, valves, and solenoids is de-coupled from the pressure rating of the valve. This enables low cost, off the shelf components to be used for even 15,000 or 20,000 psi-rated valves. 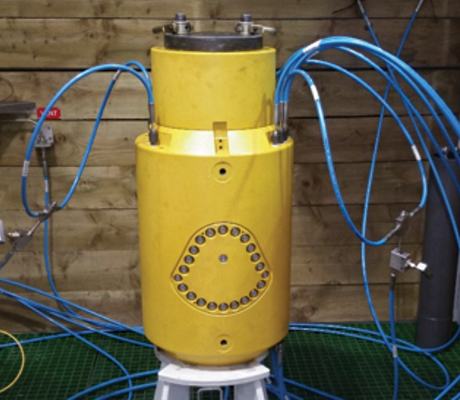 Above: In-riser 6-3/8-in. 15,000-psi wp valve during factory acceptance testing, prior to shipment to the Gulf of Mexico. 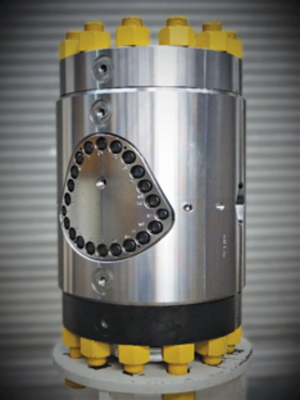 The compact nature of the valve and actuator components is extremely beneficial for subsea in-riser applications. A short valve is more easily accommodated within drilling BOPs which have irregular ram spacing that can frequently be very restrictive. Diametrically, the compact internals leave substantial material available in the body and this can be used to provide pre-loaded end connections, such as a flange. These connections are mechanically superior to non-preloaded connections and extremely desirable where cyclic loading is likely.

Overall, the Revolution valve employs fewer and simpler components, which brings benefits in terms of maintenance. Historically, this class of device has needed frequent and expensive maintenance to ensure equipment readiness. The new device, however, can be assembled quickly and does not require any specialist tooling or extensive training or knowledge. The reliability it has exhibited during endurance testing over thousands of cycles promises a huge reduction in maintenance frequency, and the design is economical to manufacture, featuring common oilfield low alloy steel for all major structural components.

Although conceived as the core valve of an in-riser landing string system, the Revolution valve can also be deployed for use in surface intervention, open water well control packages, lightweight abandonment tree-on-tree saver systems to allow well access without overstressing the xmas tree, and subsea lubricator valve assemblies.

To date Interventek has delivered 6-5/8-in. 10K psi and 6-3/8-in. 15K psi versions to customers. The valve can be adapted to greenfield and brownfield subsea well needs with heavy intervention from mobile offshore drilling units (MODUs) using a drilling riser or BOP stack, and for open water well interventions.

Last year, Interventek agreed a deal to supply its 15K in-riser valve to Louisiana-based service company PRT Offshore for exclusive use in well interventions/completions in the Gulf of Mexico as part of the latter’s ‘subsea safety system.’ This interfaces with the rig BOPs, tubing hanger running tool and downhole functions during installation, workover or removal of subsea completions. The system is designed for deepwater and high working pressure applications. The addition of the Revolution valve allows shear and seal safety and offers pump through capability to facilitate well kill operations. The valves enable PRT to offer a cost-effective, high performing solution to their clients.

More recently, Interventek launched the world’s first 5-1/8-in. 20K-psi in-riser Revolution valve following successful initial testing, capable of withstanding working pressures of 20K-psi and temperatures up to 350°F (176°C). There are currently no other 20K-psi in-riser well intervention valves on the market and the new product line was developed to support moves into more challenging ultra-deepwater well environments, particularly in the Gulf of Mexico. It is now market ready and Interventek is seeking partners to help move the development toward field trials and commercialization. •

Bruce Stuart has worked in the subsea engineering arena for over 30 years. He joined Interventek in 2018 as sales and business development director from Proserv where he was vice-president business development subsea, having previously held a seven-year tenure at FMC Technologies responsible for UK and Canada sales for subsea products and systems. He started his career originally with Cameron and then Dril-Quip. His global operational experience has seen him based in Houston, The Hague, London, and Aberdeen.