With subsea developments moving to longer tiebacks and deeper water, all-electric architecture has potential advantages over the conventional electro-hydraulic system: lower cost resulting from doing away with the hydraulic umbilical, reduced and easier maintenance, less environmental impact, and simplification of topsides. 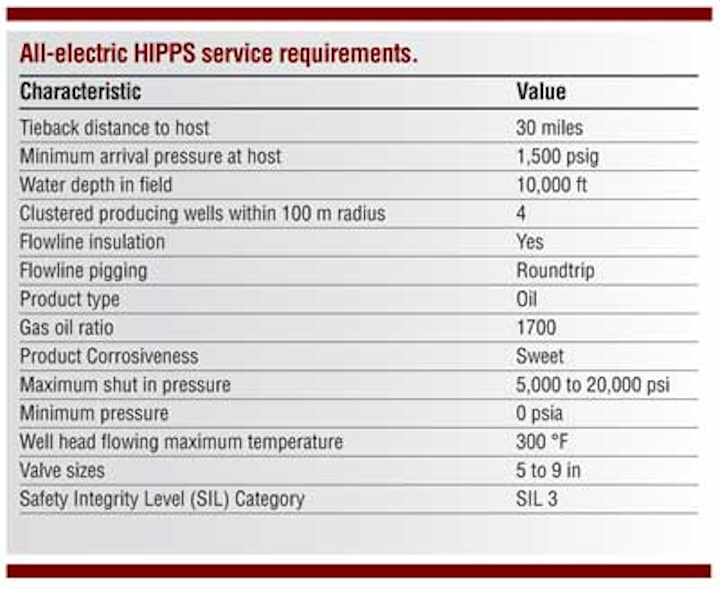 Research indicates that SIL 3 is achievable

With subsea developments moving to longer tiebacks and deeper water, all-electric architecture has potential advantages over the conventional electro-hydraulic system: lower cost resulting from doing away with the hydraulic umbilical, reduced and easier maintenance, less environmental impact, and simplification of topsides. All-electric equipment is now becoming available for subsea hydrocarbon development activities to allow this.

Use of the all-electrical architecture in developing a high-pressure field, however, requires a reliable subsea autonomous all-electric High Integrity Pressure Protection System (HIPPS), to allow a lower design pressure than the shut-in wellhead pressure for the downstream facilities. This pressure de-rating of infrastructure could allow further cost savings. 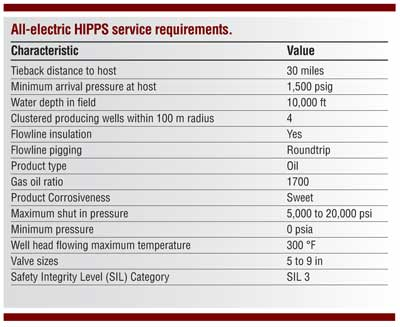 Recently, research was undertaken in a DeepStar study to assess the Safety Integrity Level (SIL) achievable for an all-electric subsea HIPPS. Where data was scant, due to the immaturity of the technology, the assessment was based on conservative assumptions. The work showed that an SIL 3 is achievable for an all-electric subsea HIPPS. This is in the same range as that of electro-hydraulic systems for similar architectures.

As common cause failures are independent of the number of HIPPS, smaller HIPPS could be used at each well rather than one large HIPPS at the manifold. The study also found a lack of prototype all-electric actuated valves and associated reliability data at the higher pressure ratings where HIPPS are most useful.

Although not addressed in detail in this article, the work also identified gaps to be addressed to bring all-electric HIPPS technology to the same technology readiness level (TRL) as conventional electro-hydraulic HIPPS.

The study concluded the following:

In addition to the above requirements, HIPPS valves are assumed to have zero leakage at the factory acceptance test and site integration test stages of project. If valves should leak in service, it is expected that a regulatory waiver to continue operation will be required. The leakage criteria used to examine the consequences of leakage is for underwater safety valves (USVs) from API Specification 14C, Table D-1. It allows a leak rate of no more than 400 cc/min.

In order to evaluate the SIL rating of an all-electric HIPPS, definition is required for design of the major HIPPS components. HIPPS are usually custom designed on a project-by-project basis and a PFD calculation performed to confirm that the design meets project requirements. For this study, a basic representative design was proposed, recognizing that variations are possible.

The HIPPS design for the study has the necessary operational functionality to accommodate the following procedures:

Operators or regulators may require testing methods more stringent than those proposed here, which assume testing the logic solver and sensor response separately rather than as a single system with the valves. To test as a system would require an additional test valve just downstream of the final element valves. This valve would be outside the safety function and would not affect the reference design or the calculations in this study.

The proposed design comprises universal HIPPS components: redundant pressure sensors, logic solver, operational capability piping, and final element valves and actuators. Often, additional sensors, sometimes even other additional components such as valves and controllers, are used to increase HIPPS operational life. Components should be field replaceable when practical to optimize reliability and performance. The chemical injection system is assumed to be fully rated.

The proposed design is applicable to both the conventional electro-hydraulic HIPPS and the proposed all-electric HIPPS.

IEEE reliability data is for topsides type electric valve actuators. Some differences exist between the IEEE actuator and a subsea HIPPS electric actuator. The IEEE electric actuator is not marinized and is identified in IEEE-493 as a fail last type. The authors assumed that fail safe subsea electric actuators would be at least as reliable as this IEEE one. This is reasonable since, given the difficulty of access and repair, subsea components are generally made with equal or greater reliability than their above water cousins.

The failure rate provided by IEEE includes the controller, position switches and overload protection, and thus captures all the components that the subsea all-electric HIPPS actuator would require. Whether these components are packaged into one actuator assembly with the valve or separate is dependent on the manufacturer.

The data selected from OREDA and IEEE was compared to information from vendors. The vendor data supports the data used in the study and in many cases indicates potentially higher availability. However, given that actual subsea use of critical electric components is in its infancy, and that the vendor data is generic, vendor confidential, or estimated, this data has not been used directly in the calculation.

Electric actuators are the key technology for enabling an all-electric HIPPS. These would be mated with a suitable valve; gate valves are most common for HIPPS-type functions.

Only Cameron has a deployment history for subsea 5-in. electrically actuated valves that would be suitable for use in a HIPPS. While other vendors, such as Bel, have valves or suitable electric actuators in advanced stages of development and testing, even in this category the all-electric envelope only encompasses sizes to approximately 7-in. and pressures up to 10,000 psi.

This Safety Integrity Level (SIL) rating is related to the average probability a device will fail dangerously upon demand (PFDAVG). For the representative HIPPS design assumed for this study, and using the reliability data and conservative assumptions previously described, the PFDAVG for an all-electric HIPPS is 5.1E-04. This PFDAVG of approximately 1 in 2000 meets the target SIL 3 criteria. A PFDAVG of 2.1E-4 is obtained for a corresponding hydraulic HIPPS. While this is somewhat better than that obtained for the all-electric HIPPS, the difference is likely because of the conservative assumptions made due to lack of reliability data for subsea electric actuators. The study found no reasons that the all electric technology should not perform as well or better than hydraulic technology.

The study examined several systems in order to:

The base case was designated Case 1, and has the SCSSV closed on each well, and the main and wing tree valves closed when the trip scenario occurs and the HIPPS valves close. The tree and HIPPS valves were assumed to be identical.

Case 2, with the same closure scenario, assumed that the tree and HIPPS valves, while employing the same principles, were of different detailed design and manufacture.

Case 3 assumed that no SCSSV was present for comparison purposes; although this is not intended to be a real case since wells always have one or more SCSSVs. Note that these systems, while similar, do not have identical operational functionality.

Should a HIPPS fail, the HUS may fail by leaking or bursting. The consequences of a leak are generally less severe than for a burst. The risk of a burst should thus be kept lower than that of a leak.

The risk criteria used here are loosely based on DNV-OS-F101 as representative of generally accepted pipeline practice for fully rated systems. For purposes of this study, the system was presumed to contain flammable or toxic product. Two location classes were identified: Location Class 1, applying to flowlines and corresponding to a medium operational safety class; and Location Class 2, applying to risers and corresponding to a high operational safety class.

For this study, the riser was assumed to be fortified so as not to control the design. Thus the medium operational safety class criteria were employed, which is appropriate for the flowline.

Given the above assumptions, a number of cases were analyzed to estimate the probability of a loss of containment somewhere in the HUS flowline segment or in the HIPPS-protected flowline.

For two identical items having the same design, from the same manufacturer, and experiencing the same operational history, the possibility of a common flaw exists such that they may all fail in the same manner at the same time.

In other words, if the probability of failure of the electrically activated valve is 1 in 1,000, and only 5% of the failures are due to common causes, then the probability of a common cause failure is 1 in 20,000. This reflects diverse sensors and logic solvers, but the same electric motor controller/actuator/valves. The SCSSV is not of the same type or from the same manufacturer, and is not assumed to share a common cause failure mode.

Given a CCF of 5%, the common cause failure probability of the all-electric HIPPS and trees is 4.24E-05. The study found that this probability is essentially the same as the probability of loss of containment without SCSSVs (Case 3).

In summary, for the analyzed HUS cases, the number of HIPPS or trees is not a limiting factor. This allows the possibility of using smaller, individual, all-electric HIPPS for each well rather than commingling through fewer larger HIPPS to reduce risk. This in turn means electric HIPPS should not be ruled out, even though they are less available than hydraulic HIPPS in the larger sizes needed to handle flow rates from multiple wells.

This article is based on the paper presented at the Deep Offshore Technology International conference held Nov. 27-29, 2012, in Perth, Australia. Authors would like to thank DeepStar Members, KBR, and Total management for permission to publish this article.