Since the 1970s, offshore oil and gas development has gradually proceeded from shallow-water installations up to around 400 m (1,312 ft) to the ultra-deep waters around 3,000 m (9,842 ft) that represent the maximum today. 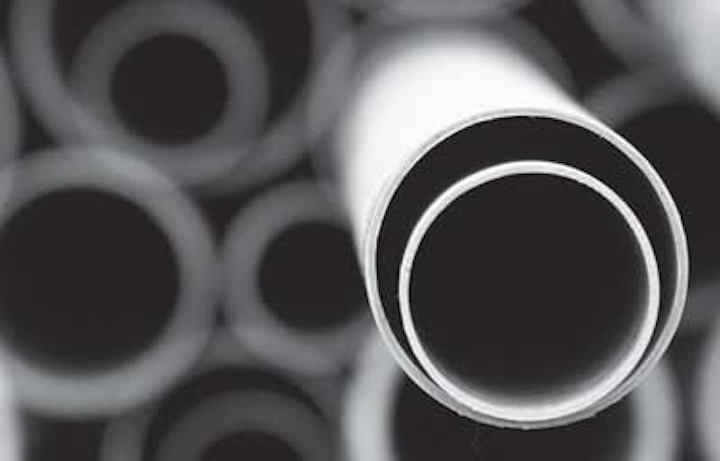 Since the 1970s, offshore oil and gas development has gradually proceeded from shallow-water installations up to around 400 m (1,312 ft) to the ultra-deep waters around 3,000 m (9,842 ft) that represent the maximum today. The question is whether the curve will flatten at 3,000 m, or if this is just a temporary pause on the way to even greater depths. There have been plans for a gas trunkline from Oman to India at 3,500 m (11,483 ft) depth, but it is yet to be seen if there will be many such projects in the near future.

In addition, the pipe will be exposed to large bending deformation in the sag bend during installation that may trigger collapse, and collapse may also be relevant for operational pipelines subject to significant corrosion.

There are at least six pipe mills that regularly supply heavy-wall, welded line pipe for offshore projects based on the UOE process: Tata Steel, Europipe, JFE, Nippon Steel, Sumitomo, and Tenaris. Research into further improving manufacturing techniques continues in the industry, and we also see several "newcomers" that can produce good quality pipes for deepwater.

This potential failure mode is normally dealt with by increasing the pipe wall thickness. But at ultra-deepwater depths, this may require a very thick walled pipe that becomes costly, difficult to manufacture, and hard to install due to its weight. Currently, there is a practical limit on wall thickness that limits the maximum water depth for 42-in. pipes to around 2,000 m (6,562 ft) while for a 24-in. pipe, this limit is approximately doubled to 4,000 m (13,123 ft).

Three factors have a major influence on the final compressive strength of the pipeline: quality of plate feedstock, optimization of compression and expansion during pipe forming, and light heat treatment. By focusing on these factors together with improving the ovality of the final pipe, it is possible to obtain a collapse resistance comparable to that of seamless pipes.

X-Stream is a novel pipeline concept developed by DNV that aims to solve the collapse challenge by limiting and controlling the external over-pressure. In a typical scenario, the pipeline is installed partially water-filled, and is thus pressurized at large water depths. Then, to ensure that the internal pressure does not drop below a certain limit during the operational phase when it is filled with gas, it is equipped with a so-called inverse HIPPS (i-HIPPS).

This system also includes some inverse double-block-and-bleed (i-DBB) valves. It is inverse in the sense that instead of bleeding off any leakage to avoid pressure build up in standard DBB systems, any leakage and loss of pressure is avoided by a pressurized void between the double blocks. This is needed to avoid unintended depressurization by a leaking valve which may not be 100% pressure tight when the pipeline system is shut down. Studies undertaken during the development of X-Stream show that the weight increase due to flooding is more or less balanced by the reduction in steel weight.

X-Stream is still at the concept development stage. Some practical aspects need to be studied, such as how to install large valves in ultra- deepwater. Another aspect is repair procedures and equipment, even though that should not be much different from normal ultra-deepwater pipelines. There are also some optimizations to be performed with respect to pressure loss during operation and equalization of the pressure during shutdown.

However, the potential benefits of the X-Stream concept to gas export and trunk lines at ultra-deep waters are quite significant, such as:

A common challenge for all installation methods when it comes to deep and ultra-deep waters is the tension capacity. The catenary length before the pipeline rests at the seabed can become quite long, due to the water depth. The pipe needs to be very thick walled to have the necessary collapse capacity; and thus the submerged weight can become high. It is also often required that the installation vessel be capable of holding the pipe in case of accidental flooding (e.g. a wet buckle). However, it is still a topic of discussion whether it is absolutely necessary to be able to hold an accidentally flooded pipe.

Another challenge related to deepwater installation is how to detect buckles during installation. Normally, a gauge plate is pulled through the pipeline by a wire at a certain distance behind the touchdown point. In case of a buckle, the wire pulling force will increase to indicate that something is wrong. However, in ultra-deep waters, the length of the wire and the friction between the wire and the curved pipeline may give challenges in detecting minor buckles. Having a long wire and buckle detector inside a pipeline during installation can also be risky. If the pipeline is lost, the water will push the wire and gauge plate inside the pipeline and it may not be possible to get it out again.

The Ormen Lange field is located in a pre-historic slide area, with an uneven seabed at nearly 900 m (2,953 ft) water depth. In its early development phase, a submerged, floating pipeline concept was studied to overcome the challenging seabed conditions. By mooring the buoyant pipeline to the seabed, no seabed intervention work would be required. The concept was left for the benefit of a more traditional concept with the pipeline on the seabed mainly because of the challenges with interference between trawl gear and the mooring lines, but it is still considered feasible both with respect to installation and operation.

Another floating pipeline concept has been developed by Single Buoy Moorings. Here the buoyancy is ensured by a large-diameter carrier pipe to which the smaller pipelines are attached. Buoyancy modules, clump weights, and the end anchoring system ensure tension in the pipeline bundle. A short bundle connecting the FPSO and the spar has been installed at Kikeh offshore Malaysia. However, the maximum length of this concept can be extended by use of intermediate vertical supports. Potential challenges will be hydrodynamic forces, both the steady-state drag and the cyclic ones, including vortex-induced vibrations. The challenge is to balance the need for anchoring with the need for flexibility to absorb the forces. (e.g., by making the attachment to the mooring lines in such a way that it does not cause too concentrated bending deformations).

A future solution for ultra-deep and topologically challenging locations may be to further develop the SpiralLay method developed by Eurospiraal. In this application, the line pipes are joined onshore and wound into a spiral for towing offshore. The spiral can take a quite long length of pipeline which makes it possible to pressurize it. On location, the pipeline is un-wound and installed in a short time. The concept involves installing a pressurized pipeline from a submerged spiral floating at a safe distance above the seabed, thus avoiding the challenges with the combined loading in the sag bend at deep and ultra-deepwater depths. This is a novel concept and needs further development and testing.

Seabed intervention and tie-in become more challenging with increasing water depth. Some of the equipment, such as fall pipes for rock installation vessels, have practical limitations (e.g. the maximum length of the fall pipe). The same is the case with ROVs and other equipment needed for installation. Some repair methods - such as retrieving a damaged part to the surface or using subsea welding with divers - are limited by water depth, and can only be used in 200 to 400-m (656 to 1,132-ft) waters. For deepwater, repair methods based on remotely controlled equipment are needed.

Recently developed repair methods for deepwater are based on different types of clamps that are fitted over a locally damaged area; or involve cutting and replacing a section with use of end flanges/couplings and spool pieces. In cases with extreme or comprehensive damage, a new pipeline section may be installed. Typically, both the clamps and the end couplings need to be sealed with grouting or metallic seals. Examples are the Oceaneering systems based on Smart Flange/Connector/Clamp and the Chevron deepwater repair system. These are under development, and designed to operate down to 3,000 m water depths. The Statoil-led PRS consortium is also developing a repair system for deepwater based on remotely welded sleeves. This system is based on two lifting frames, cutting the damaged part, then installing some couplings and a new spool piece.

Today, 65% of the world's offshore pipelines are designed and constructed to DNV's pipeline standard DNV-OS-F101. It is the only internationally recognized offshore pipeline standard that complies with the ISO codes. The ISO pipeline standard itself, the ISO-13623, is more like a goal setting standard with basically one hoop stress criterion and one equivalent stress criterion, and with little guidance for engineers on how to actually design a pipeline. Here, DNV-OS-F101 has found its niche, giving more detailed requirements in compliance with ISO-13623.

Another reason for the standard's success is that it is based on the so-called limit state design, where all potential failure modes have to be checked according to specific design criteria with given safety factors. This makes it easy to apply the code to novel designs and outside the typical application range (e.g. in deep and ultra-deep waters, in Arctic environments).

The collapse capacity and the fabrication factor for UOE line pipes may be taken as a good example of the flexibility of the DNV-OS-F101 code. The code contains a clause allowing for upgrading the fabrication factor due to different aspects such as light heat treatment and/or compression, instead of expansion at the end of the manufacturing process. The code is also quite transparent in the way the design criterion is written in order to facilitate and take into account innovation and improvements in the fabrication process. Similarly, new concepts such as the X-stream or various pipe-in-pipe concepts may easily be accounted for by adjusting the relevant failure modes, and adding new ones if relevant.

The most likely deep and ultra-deep potential field development areas known today are Gulf of Mexico, the Brazilian presalt areas, and East and West Africa. All pose challenges that could benefit from technology development and innovation.