Umbilicals are custom designed to meet the needs of each specific field development. 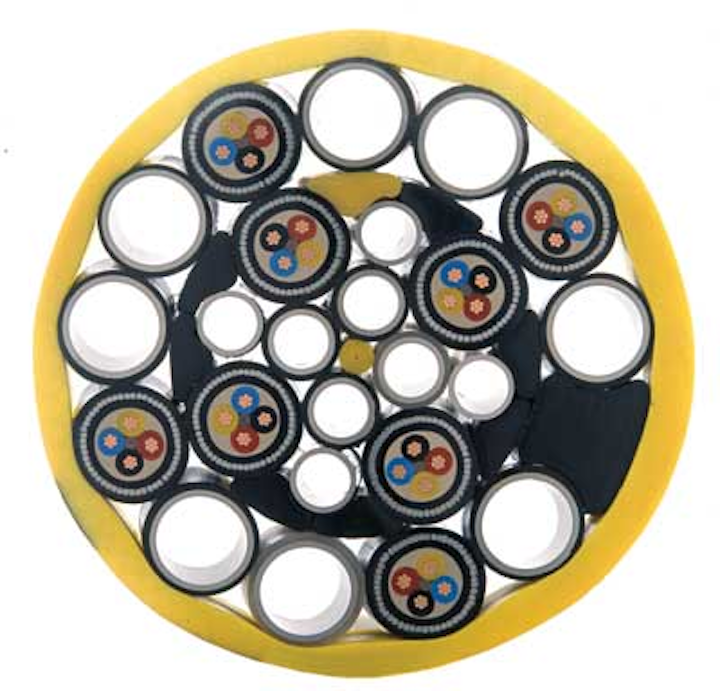 Umbilicals are custom designed to meet the needs of each specific field development. Traditional designs, including thermoplastic hoses for hydraulic control and chemical injection, have mainly been supplied to the UK North Sea. However, as production moved into deeper waters and extreme environments in the 1990s, the market expanded to include steel tube umbilicals. Development of steel tube service lines for deeper waters enabled the industry to operate fields previously inaccessible to control from the surface.

The umbilicals supplied by Technip for Shell's Perdido development in the Gulf of Mexico are the deepest installed anywhere, at almost 3,000 m (9,842 ft) water depth. More recently, Technip has developed medium voltage power technologies for subsea power applications. Another growth area for steel tube umbilicals has been West Africa, in particular deepwater Angola. Many of the world's largest and most complex umbilical systems have been delivered to projects in this sector.

The initial investment provided a fully independent manufacturing facility, with new factory building and offices, steel tube sheathing, helical assembly machine, extruder, process reels, and a Jumbo reel transporter. For many of its projects, Angoflex works in partnership with sister companies DUCO in the UK and DUCO Inc. in the US, which can supply umbilicals in carousels, spooled directly onto installation vessels. One recent example is Total's Pazflor development in block 17.

Technip Umbilical Systems performed umbilical design, manufacture, and project management for Pazflor. The scope of the subsea contract, awarded in 2008, was one of the largest and most complex the company had taken on to date, requiring 33 umbilicals of various types and some of the industry's most exacting requirements to date.

Following initial R&D and engineering, performed in Newcastle, UK, Technip Umbilical Systems (TUS) built and tested three prototypes to demonstrate that the proposed design would perform under demanding deepwater and dynamic conditions. The umbilicals - dynamics, main statics, production statics, water injection and gas injection - were manufactured by TUS in Angola and in Houston. Delivery and installation followed in 2011, helping Total achieve first oil ahead of schedule.

Gearing up for CLOV

In the same year as the Pazflor award, Technip and Sonangol approved a business plan to expand Angoflex by increasing the capacity of its helical assembly machine and adding two large capacity carousels. These would allow umbilicals to be spooled directly to the installation vessel. It would also provide the benefit of having 100% of umbilicals for local projects manufactured in Angola.

The expanded facility was commissioned in 2012, and is currently working on its first project sourced by 100% local content, for Total's multi-field CLOV development, again in block 17.

The Angoflex team has grown to include Angolan project management and engineering support in addition to manufacturing personnel. It now employs more than 200 staff, and the company achieved two million man-hours without a single lost time incident.

Its strategic position in Angola means that developing markets in other West African countries and off East Africa are easily accessible. Currently it is working on numerous bids for projects in Angola, both directly to major operators and in partnership with Technip.

Technip in Angola itself has three main activities:

Angoflex is involved in Technip group's ongoing umbilicals R&D program, with various technologies under development for increasingly challenging environments, deeper waters, and longer tiebacks to offshore facilities and to shore.

The focus is on new types of materials and processes - for example, high strength or non-metallic strength members that provide stiffness and tensile strength without the additional weight that a conventional helically armored umbilical may have. Also, a move toward high tensile aluminum, away from copper electrical conductors, provides a fatigue-resistant load-bearing core for medium voltage cables used in subsea pumping and processing. Additionally, umbilical R&D involves enhancing existing components.