Industry steps up recruitment in response to 'great crew change'

As the offshore oil and gas market continues to heat up due to global demand and high prices, so does the competition for talent. 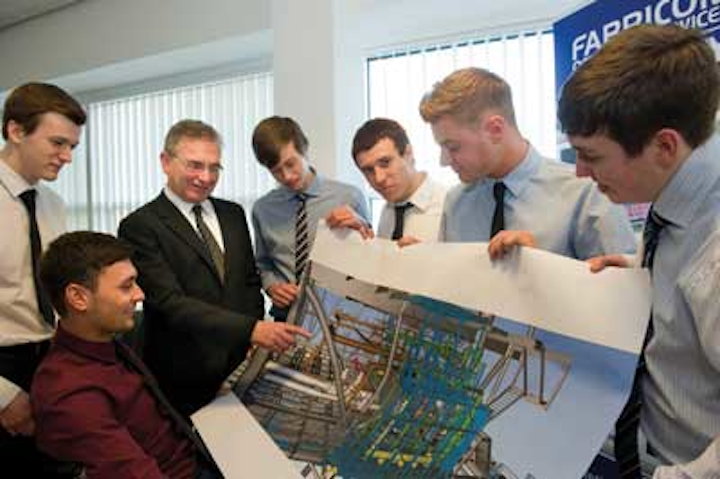 As the offshore oil and gas market continues to heat up due to global demand and high prices, so does the competition for talent. Oil and gas professionals saw an 8.5% rate of growth in salaries in 2012, according to a new report from Hays Oil & Gas and Oil and Gas Job Search. The report, "Oil and Gas Global Salary Guide 2013," says the industry's global average salary is $87,300. The top five average local salaries are located in Australia, Norway, New Zealand, the Netherlands, and Canada.

Duncan Freer, managing director of Oil and Gas Job Search, said: "Despite the concerns in Europe and a slowdown in China's growth, the sentiment in the industry remains positive. Current employees and new entrants to the industry can look forward to working in a dynamic and highly rewarding sector."

Even with a buoyant job market, many recent surveys of oil and gas professionals have found that the industry's greatest concern is the skills shortages presented as many baby boomers prepare to retire over the next decade.

Don Shoultz, head of Learning and Development at BP, said: "The industry's more experienced talent needs continually to transfer the knowledge and skills they have built up through mentoring programs. Separately, oil and gas companies, of all sizes, need to ensure they are consistently increasing their investment in formal training and development programs."

Academia and the industry

As the industry moves into deeper waters, the development of geosciences, subsea, and deepwater talent increases.

The University of Houston has received the Texas Higher Education Coordinating Board's approval to offer the first subsea engineering graduate program in the United States. Established in collaboration with FMC Technologies, Cameron, GE Oil & Gas, and Weatherford, the 10-course master's program, which is expected to begin in the fall 2013, will include classroom lectures and hands-on software education for subsea systems design.

Students will be assigned a major design project and each course will require a written project report, a technical presentation, and the use of state-of-the-art subsea engineering software. The courses will cover flow assurance, pipeline design, riser design, materials and corrosion, subsea processing and artificial lift, and subsea controls and systems engineering. Since the program is designed for working engineers and recent Bachelor of Science recipients, classes will be taught in the evening by industry professionals and full-time college faculty members. The university currently has a subsea engineering certification program.

In August 2012, FMC Technologies Measurement Solutions, based in Erie, Pennsylvania, opened a 2,000-sq ft (186-sq m) engineering design center to provide hands-on job training – and job offers – to engineering students at Penn State Erie, The Behrend College. The company says the center builds on a 10-year partnership between FMC Technologies and Penn State Behrend. The college has provided 30 interns to the FMC Technologies engineering department during that period. Seventeen went on to accept full-time positions at the company after graduation.

Fabricom Offshore Services Academy in Newcastle, UK, has been developed by engineers for engineers to provide a fully-integrated training, learning, and development set of programs aimed at graduates, apprentices, and people looking to upgrade or diversify their skills. More than 30 people are already undergoing apprenticeships, graduate training programs, and professional development schemes at the academy.

The company's four-year modern apprenticeship scheme offers classroom-based training at Tyne Metropolitan College, three years on site at the Newcastle head office, practical training in various engineering disciplines, NVQ Level 3, HNC qualifications, and industry experience. Fabricom CEO Allan Cairns said: "The Fabricom Offshore Services Academy provides a solid platform to develop engineers from the start of their careers through to Chartership in eight to 10 years, which bolsters our internal supply chain. I am already confident that we are helping to address the skills shortage by delivering the engineers and industry leaders of the future."

As part of Britain's government strategy to continue investing in the offshore oil and gas sector, $10.6 million went to Newcastle University through the Higher Education Funding Council for England to establish the Neptune Centre for subsea and offshore engineering. This facility will promote interaction of industry and academia, provide infrastructure for emerging research opportunities, and help develop skilled graduates to address critical skills shortages.

In September 2012, Aker Solutions signed a two-year agreement with Institut Teknologi Bandung, Universitas Gadjah Mada, and Politeknik Batam to provide six-month internships to students in Indonesia. The internship program will be carried out at Aker Solutions' manufacturing center in Batam, Indonesia. Under the agreement, the company will provide on-the-job training opportunities to 12 students every year.

One way the industry is bridging the skills gap is by investing in technological innovation and expanding research and development operations.

Saudi Aramco's EXPEC Advanced Research Center (EXPEC ARC) and the Research and Development Center (R&DC) are expanding internationally by establishing satellite research centers to increase access to talent and technology and to promote closer collaboration with key research institutions. In September 2012, the company's first research office opened at Delft University of Technology in the Netherlands. The center concentrates on geophysics research in near surface characterization and data-driven seismic processing.

Five additional stand-alone research centers are expected to be fully operational in 2013. The second technology office, located in Aberdeen, Scotland, will handle partnerships, collaboration, and other business functions largely related to production and drilling technologies. The center in Beijing will emphasize research in reservoir and production chemistry, as well as geophysics.

Aramco Services Co., the United States subsidiary of Saudi Aramco, is opening a research center in Houston that will focus on the recruitment of research and development professionals. In Cambridge, Massachusetts, adjacent to the Massachusetts Institute of Technology, a research center will support computational reservoir modeling, nanotechnology, and advanced gas membrane systems, and will host EXPEC ARC and R&DC teams. A research center in Novi, Michigan, will focus on carbon capture from mobile sources and fuel technology research.

GE says that it will build an oil and gas technology center in Oklahoma City that will initially create 125 high-tech engineering jobs in disciplines ranging from geology to mechanical and electrical to systems and software engineering.

FMC Technologies is constructing its Brazil Technology Center at the Federal University of Rio de Janeiro, an area that has been designated as the hub of the country's future oil and gas technology development. The building will contain engineering offices, technical training and design areas, research and development laboratories, and the capability for full-scale prototype integration and testing of subsea systems. The center will support three main disciplines: engineering and research and development; product qualification laboratories; and assembly, tests, and system integration testing.

As the offshore oil and gas market and confidence continue to grow, companies continue to expand around the world.

A second phase of development is under way, which includes construction of the technology administration building, workshops, deep well simulators, high-pressure/high-temperature testing facilities, and the completion of a deep horizontal well, enabling all aspects of engineering testing and simulated systems integration testing.

GE's Oil & Gas Subsea Systems business, headquartered in Aberdeen, plans to build a new subsea center in Bristol at the city's Aztec West Business Park. By establishing this facility, the company will create 200 new jobs in 2013.

Rod Christie, vice president for Subsea Systems at GE Oil & Gas, said: "The area has a strong pool of high integrity industries, such as aerospace, defense, nuclear and automotive, that we can tap into, allowing us to realize our growth goals more readily."

In January, the company established a new technology and service center near Basra, Iraq. The facility will help boost production in the Rumaila oil field offshore southern Iraq. In addition to being a base for the supply of pressure control equipment to Iraq's drilling and production sector, the new center provides a range of services including installation and maintenance, testing, inspections, repair and storage. Future services will include complete non-destructive testing capabilities, machine, welding and heat treatment, blasting and painting, and API certification and recertification.

Rami Qasem, president and CEO for the Middle East, North Africa and Turkey of GE Oil & Gas, said: "The center not only builds on our long-term commitment to the country but also complements the government's focus on promoting job creation and nurturing the technical skills of the Iraqi professionals." The company also has offices in Baghdad and Erbil, Iraq.

GE Oil & Gas and the Angolan group GLS Holding S.A. have entered into a new joint venture, GE-GLS Oil & Gas Angola Ltd., to better support Angola's rapidly growing oil and gas sector. As part of the agreement, which received the approval of Angola's National Agency for Private Investment (ANIP), the companies are planning a proposed initial investment of $175 million to build a new manufacturing facility in Soyo, in the province of Zaire, that will supply subsea equipment to the country's oil and gas industry.

The new manufacturing facility will start operating in two years. Armindo Costa, president of GE Oil & Gas Angola and the new joint venture, said: "An investment of this size will require a large workforce. While there are difficulties in finding staff locally, we are committed to recruiting and training Angolans for the project."