How can a subsea system operate in an unknown location, with indefinite duration of deployment during a severe weather event? 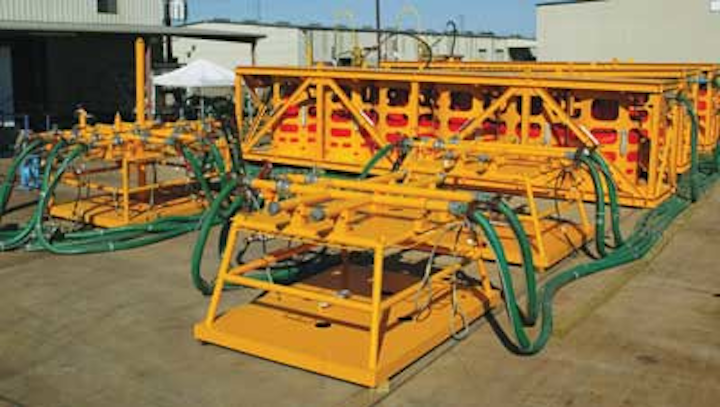 How can a subsea system operate in an unknown location, with indefinite duration of deployment during a severe weather event? OceanWorks is answering this question by building a subsea fluid injection system capable of autonomously intervening in a subsea oil well containment incident.

By placing the fluid pump station subsea, it is sheltered from surface weather conditions.

OceanWorks also developed the capability to swap battery packs. The battery packs are absorbed glass mat units which are marinized using pressure-balanced oil-filled housings that are ruggedized for subsea deployment.

The bladder skids can be filled prior to or during deployment to allow use of a range of vessels of opportunity. Additionally, hoses are stored onboard to simplify and speed deployment.

The battery, pump, and bladder skids are scalable in number for ease of manipulation, says OceanWorks.

Jim English, senior vice president of OceanWorks comments: "Our pump, power, and fluid storage bladder skids combine like Lego blocks, so operators can define requirements during deployment, not during design. An emergency will define those requirements for you. You need to be able to respond flexibly, with what you already have."

OceanWorks' smart electronics are key to monitoring and controlling the system, and also detect damage so users can reroute around it.

Using its existing subsea UPS power supply designed for the US Navy, Subsea Autonomous Dispersant Injection (SADI) bladder skids, and long-term subsea electronics control and monitoring systems built for the VENUS, NEPTUNE, and OSB ocean observatories, OceanWorks says it was able to develop a system to suit the particular needs of its client, the Marine Well Containment Co. (MWCC).

"We wanted this system to be three things: simple, scalable, and tough," concludes English.