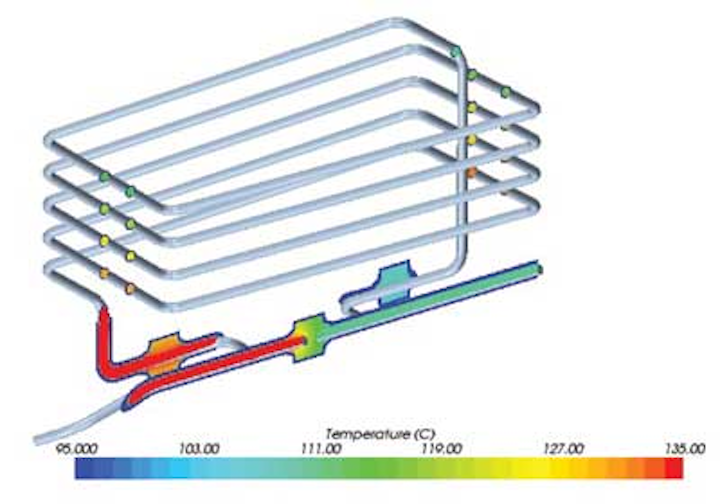 Computational fluid dynamics (CFD) can combine with traditional pipeline modeling software to improve detail and speed of both applications for accurate flow assurance modeling. Without CFD, some projects may not be as successful, or may not be able to commence at all. While computational powers at present may limit the ability to use CFD across an entire system, this technology will play an increasingly important role in flow assurance.

Modeling the hydraulic and thermal relationships between fluids and gasses in a production environment can be an inexact science. As systems become more complicated, determining the impact of these interactions within oil and gas pipelines and infrastructure becomes more challenging.

Traditional pipeline modeling systems have been around for almost 20 years, and a number of projects have presented flow assurance engineering challenges that could not adequately be resolved using standard multi-phase transient simulator modeling tools. In these instances, CFD modeling has been used in addition to standard techniques to achieve advanced flow assurance solutions. Some of these projects would not have been viable without the use of CFD, and it also has enabled pioneering subsea projects to take place.

Current common tools allow large, complex, full-scale network modeling, with the ability to include wellbore, reservoir, and process equipment operations. An entire subsea pipeline network can be modeled, even with numerous wells and multiple lines.

This can be done in a reasonable timeframe. For example, a large model could run in a day, giving significant computational output. With this run time, software can play out 20 years of production of an oil well and calculate the temperature and hydraulic effects over time to aid optimum system design.

These programs also enable full multi-phase pressure, volume, temperature (PVT) capability, including component tracking through the network to calculate changing compositions. Transient operations are possible with some software which provides data on the change in hydraulic relationship with time as well as flow conditions. Therefore, many parameters can be analyzed from a single run.

However, there are limitations with this type of software. Detailed analysis of specific points in the system is not possible due to the section resolution required to model large-scale networks. It can focus on 2- to 5-m (6½- to 14½-ft) long sections, but fidelity is lost trying to examine the first 10 cm (4 in.) downstream of a mixing point, for example.

It is not possible to model complex geometries for specific equipment such as valve internals, spools, manifolds, and process equipment. Traditional software only models round pipe, so it may miss localized areas of concern and detail such as flow distributions, cold spots caused by flow paths, and erosion risks. Certain flow paths cause this, for example, where there is a tight elbow in a valve there can be an erosion risk at the edge of the elbow because of the significant flow energy on that area.

Thermal models also are limited and are not always sufficient for use on complex pipe and equipment arrangements, or certain transient events. Thermal models also work on a standard cylindrical shape, so calculating heat loss in a pipe that is part submerged is impossible as it is not universally cylindrical. Also, natural convection (both internal and external) and radiation are not accounted for.

Analysis of low material temperatures caused by rapid gas expansion (JT cooling) is possible using CFD. This includes cold spots and thermal gradients which can exceed the design limits of the material, and traditional pipeline tools which do not give the distinction required. Situations can be evaluated including choke valves and downstream pipework at start-up, and process equipment and pipework during blowdown.

Flow distribution at flow path splits such as manifolds, metering skids, and finger slug-catchers can be modeled. The last is the most important because without equal distribution there is no benefit in having finger slug catchers. Other systems would just equally split the flow path without deriving the actual likely flow split.

For rapid valve closures, CFD enables analysis of peak pressure pulses close to valves. This water hammer effect causes localized high-pressure waves which cannot be analyzed in systems that smooth out the hydraulics.

Although CFD modeling is powerful and suitable for precise evaluation of specific areas, it is not viable for modeling large-scale networks or life-of-field analysis due to its computational intensity.

In some instances, it is useful to combine the analysis carried out in CFD with pipeline modeling tools to allow full network analysis using CFD derived results. It combines the accuracy of CFD with the speed of pipeline modeling.

Application of maximum erosion velocities for solids laden fluids can be done to determine what gas velocities will cause an erosion risk. CFD also allows for detailed analysis of phase distribution in through pipe to demonstrate dispersal in gas/water mixes.

In a subsea oil development in the Norwegian North Sea, the engineering consultancy worked on a tieback to an FPSO project from multiple well pads. The specific challenges for thermal modeling in OLGA included the subsea cooling coils or spools, and the fact that the pipeline was partially embedded in soil.

It also involved bundles of pipelines from wells to risers. Each bundle had two production lines and one water injection line. The multi-dimensional heat transfer mechanisms in the bundled pipeline system were complex and not adequately captured using standard OLGA modeling.

Another challenge was heat loss during shutdown, and concerns about survival time due to wax and hydrate.

CFD software Star-CCM+ modeled a short section of the pipeline bundle and derived the U value. This considered conduction; the K values for aged and un-aged insulations and effect of spacers, as well as convection; the interactions between bundle pipelines; and the effect of film coefficient.

The U value changed through field life and along the length of the bundle. The cool-down response was analyzed with CFD. OLGA parameters, U value, heat capacity, and effective annulus current speed were tuned to match the response of CFD analysis. Those combined parameters were analyzed in CFD and then put into the pipeline software to model the whole system.

Heat loss in the cooling coil was analyzed in STAR-CCM+, and the effective U value was calculated and applied in the OLGA model. The effect of seawater current speed was minimal as natural convection caused a chimney effect and drew cool seawater up through the coil.

The OLGA models were tuned to match the heat transfer coefficient supported by detailed CFD analysis rather than from published standards. This accounted for all thermal interaction mechanisms and accurately simulated the cool-down response of the overall bundle system. Life-of-field and transient analyses then were performed on this basis.

In this case, due to the complex thermal system and because the fluid temperature was critical, without use of CFD it may have appeared uneconomic to produce this well. The lack of accuracy would have meant engineering with large safety margins. Using this high-fidelity analysis removed some of the conservatisms and enabled a tightly engineered design.

This case study focuses on the design of a simultaneous water and gas injection (SWAG) system in a subsea oil field where production wells were tied back to an FPSO. This was a particularly unusual system and a subsea first.

The water and gas injection fluids are delivered to a subsea injection well in separate flowlines and combined immediately upstream of the well prior to injection. This design demanded that the gas be fully dispersed within the water stream so no separation occuredin the wellbore to elevate hydrate risk.

The injection system, including the well, was modeled using OLGA. Because detailed analysis was required at the co-mingling of the fluids, STAR-CCM+ was used to analyse gas dispersion in a range of available mixing technologies.

OLGA analysis of the system showed combined fluid would operate in the slug regime at expected process conditions, resulting in poor injection and possible well damage. Xodus was tasked to design a mixing device to overcome this problem.

Initially a simple T-piece mixing solution was explored, but with poor results as the gas and water separated quickly. Peak mixing occurred 6 m (19½ ft) downstream of the mixer with stratification 40 m (131 ft) downstream.

A collar system was considered, where gas flows around the metal collar and is then injected in multiple points around the circumference of the water pipe. This proved more effective with improved mixing which was enhanced further when the injection points were situated only on the bottom of the pipe.

In this case, some level of stratification occurred 40 m downstream of the mixer regardless what design was in place. The sleeve mixer design was significantly more effective than the simple T-piece, which the client had initially pursued.

Locating the gas injection holes only at the bottom of sleeve increased the mixing. Bubble diameter was the most significant factor in successful mixing, and reducing the velocity had little impact on mixing uniformity.

These modeling outcomes allowed the functional design to be specified, ensuring that mixing occurred as close as possible to the injection point. Small holes were used to decrease bubble diameter when using holes only on the bottom of sleeve of the mixer.