A great deal of engineering expertise is being applied these days to well intervention. 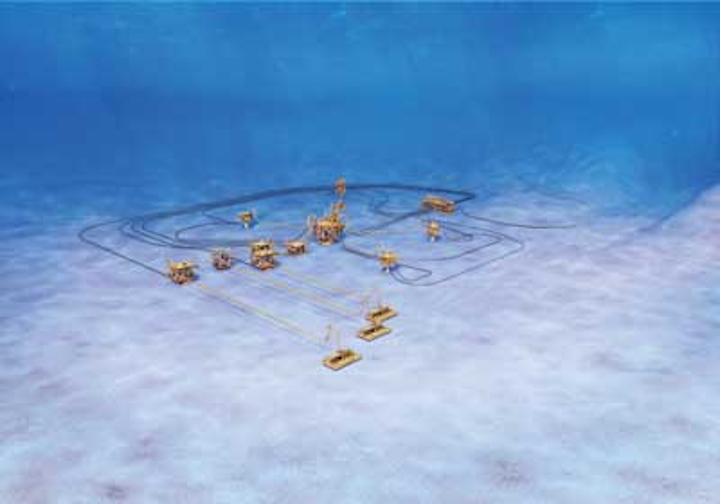 A great deal of engineering expertise is being applied these days to well intervention. Keeping wells producing is an admirable and necessary goal. However, it is quite probable that an equal amount of engineering time is being spent on postponing interventions for as long as possible. This is particularly true in the case of deepwater wells.

In deepwater areas, the cost of well intervention is a formidable barrier. A single intervention can cost many millions of dollars, and in many cases, the result is uncertain. There are no guarantees. To lower the risk, operators are equipping deepwater wells with permanent gauges and other sensors that allow them to monitor production, looking out for the telltale signs that may indicate the onset of a condition warranting an intervention. Early warning signs often trigger non-intervention remedial action that can forestall or eliminate the need for an intervention altogether.

These remedies may include injection of chemicals to mitigate impending flow assurance issues like waxing, sanding, or the appearance of hydrates, asphaltenes, or scales. Intelligent well completions allow operators to change downhole flow controls to cut off premature influx of water or gas, without having to enter the well or disrupt other production.

The common thread of all actions taken to postpone intervention is access to actionable information. This can come from many sources. Time lapse seismic (or 4D) requires no downhole sensors, but can provide reservoir-wide information on fluid migration, flow streams, compartmentalization, and other conditions. This information has dual value. It can improve understanding of the reservoir production unit, often called reservoir characterization, so non-intervention solutions can be developed and implemented. In addition, the good news is that if an intervention cannot be avoided, the information can prove invaluable in designing the most cost-effective and long-lasting solutions to the issues threatening sustained production.

Sometimes, solutions are elegant in their simplicity. Production from a deepwater field offshore West Africa was being boosted by an electric submersible pump (ESP). At the time, in that particular area, access to a workover rig had a minimum waiting time of six months, in the worst case 12 months. Realizing that an ESP failure could cut off production from one of its most prolific wells for up to a year, the operator installed two ESPs in tandem with an automatic switchover device. The first ESP was energized, initiating production of 6,000 b/d. The other ESP was dormant. Both pumps were instrumented so pump condition and well performance could be monitored at the field production office.

If the producing pump failed, it would automatically switch to the backup pump with no production loss, and an alarm would be sent to the production office who would initiate a bid for a workover unit. Thus, repairs could be performed with the only interruption of production being the actual time to replace the bad pump. The investment in the dual pump system was negligible compared to the cost of lost production, had there been no backup. The added benefit of instrumentation enabled continuous analysis of downhole conditions and proved invaluable in predicting problems before they became serious or before they inflicted collateral damage to the well or reservoir.

Modern sand management practices and solutions help operators avoid interventions to mitigate sanding. Even this begins with making careful measurements of geomechanic parameters before investing in a potentially costly solution. The best solution is prevention. Often operating parameters can be maintained within safe limits to avoid sanding altogether or at least to postpone it. Modern sand control completions that incorporate inflow control devices can allow sand-free production for many years, thereby reducing intervention costs. The cost of installing effective sand control hardware with the initial completion is almost always less than the cost of a later intervention, especially in deepwater.

Often, despite the best efforts and maximum use of technology, an intervention must be performed to restore a well to full production. This has not escaped the attention of creative engineers who are working to minimize the cost and risk associated with working over a well. When the well is in deepwater, the complexities of the challenges grow exponentially.

The first hurdle is lack of standardization of subsea wellheads. This complication has been recognized and addressed by engineers at OneSubsea, who have developed the MARS multiple application reinjection system, often referred-to as the "subsea USB" port because it can adapt any spool tree to couple with any intervention string. No matter what the ultimate objective of the intervention is, the MARS module can enable entry of the well safely and efficiently.

An advantage of a universal connection module is that it enables light well intervention services, the kind that can be deployed by a relatively small vessel. This avoids having to contract a drilling or workover rig for an overhaul that does not require one. Experience has shown that the majority of interventions can be accomplished using wireline or coiled tubing conveyances as long as they can couple with the wellhead to maintain well control.

If a riser is required, it can be deployed from a deepwater subsea landing string, as offered by service companies. These offer full opening access to the wellbore with double barrier BOPs. These can perform full production tests, well cleanout or stimulation, chemical injection, or cased hole logging and perforating services. One necessary feature of deepwater landing strings is a remotely operated emergency shutdown system and getaway capability. One company touts a system that can do a complete shutdown and getaway within 15 seconds.

Conditions peculiar to deepwater wells require special considerations and challenge engineering teams to the utmost of their abilities. Since deepwater wells are beyond the depths accessible by divers, all work must be performed by ROVs. This requires advance planning because any controllable module must be designed for ROV access, or must be configured for electro-hydraulic control from the surface. In most cases, both capabilities are required to ensure a redundant safety system. In the event of an unplanned disconnection, automatic well shut-in is triggered and is energized by subsea accumulators inherent to the system.

Tubular conduits to the surface must be designed to mitigate vortex-induced vibration (VIV), a destructive condition caused by subsea current flowing as little as 2-3 knots per hour. Typically, the effects of VIV can be minimized by attaching helical strakes to the outer surface of the pipe to break up the harmonics induced by the passing current.

Thermal shock can affect fluid flow from subsea wells. The temperature at the seabed can be just a few degrees from freezing so produced fluids leaving the reservoir at temperatures of several hundred degrees cool as they reach the seabed and then rise again as they near the surface. The range of temperatures through which the produced fluid must pass can precipitate solids like wax, hydrates, scale, or asphaltene that can clog production equipment and flowlines. This can create an intervention requirement in itself. Many companies deploy insulated or even heated flowlines to maintain production temperatures above the appearance threshold of these materials.

Phase changes in produced fluids can occur over time. As reservoir pressures decline past the bubble point, gas can come out of solution and impair production. Not only does this require steps to deal with the gas, but it also requires the use of multi-phase flowmeter devices to measure the production. Seabed separators may be necessary. If ESPs are used, as they are in several recent deepwater completions, the ESPs must be equipped with advance gas handlers or else may experience premature failure that requires an intervention.

Similarly, water cut can advance over time. Water can be separated at the seabed and re-injected into a disposal aquifer, or produced to the surface for disposal. Too much water can require an intervention to identify the source of the water influx and to seal it off. Fortunately, this can often be accomplished through tubing without having to kill the well.

In a large sense, the world's thirst for abundant supplies of cheap, clean-burning energy continues to grow. The good news is that despite deepwater complexity, risks, challenges, the value of the prize exceeds the costs to produce it. Today, completions are being executed in waters approaching 10,000 ft (3,048 m). The cost of interventions has stimulated considerable innovation on the part of offshore producers and service companies to forestall or eliminate them.

At the same time, the bad news is the inevitability of interventions occurring at some point during a well's life. It is unreasonable to expect a well to produce untouched for its economic life. Nevertheless, this has encouraged continued research on ways to perform them more efficiently, more safely, and more effectively by extending the time between the interventions.

A third front has developed as increasing demand and improvements in technology have turned attention to the 65% of residual oil left behind following initial production. With vast deepwater reservoirs being discovered today, producers and service companies are investing in enhanced oil recovery technology whose goal is not just to improve recovery factors but to double them. The key to success in these areas is data. Operators must perform timely acquisition of data, not just for exploration and drilling, but also for completing and producing the reservoirs more effectively. The key to enhanced oil recovery is a detailed understanding of the reservoir in all its complexity, along with its production history.

Once this information is gathered, processed, and stored, the vehicle by which it will be applied is called "intervention." And deepwater resources represent the greatest prize of all.