Solving the problem of ocean floor seawater treatment for EOR

One new subsea challenge is the production of distant oil satellite fields into existing facilities. 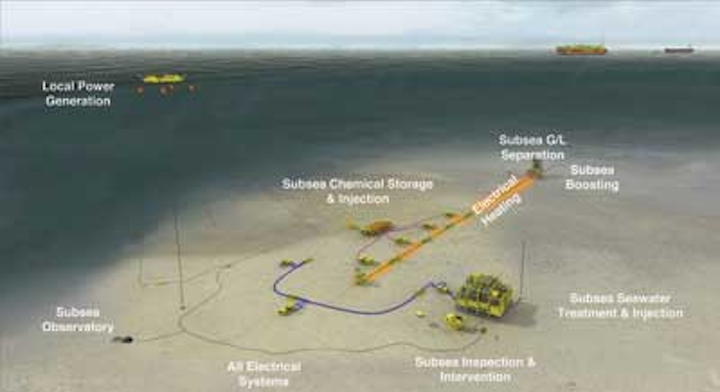 One new subsea challenge is the production of distant oil satellite fields into existing facilities.

Water injection in these oil satellites is of prime importance for reserves optimization; unfortunately in most cases, it is necessary to remove sulphates from the seawater before injection into the reservoirs. Reservoir waters often contain elevated concentrations of barium or calcium, leading to sulfate scaling in reservoirs, risers, and topsides equipment.

SPRINGS (Subsea PRocess and INjection Gear for Seawater) treats seawater using nano-filtration membranes to remove sulfates prior to injection of the treated water. This technology is a subsea alternative to conventional topsides seawater sulfate removal units. The main advantages are a greater flexibility in the water injection pattern for a better reservoir sweep, removal of the subsea water injection network, and savings on topsides weight and deck space.

SPRINGS is developed specifically for the subsea environment and a program is on-going for full qualification at 3,000 m (9,840 ft) water depth. The development of isolated subsea fields far from existing infrastructure, and often in harsh environments such as deepwater, west of Shetlands or the Arctic seas, has led Total E&P, in collaboration with Saipem, Veolia Water, and VWS Westgarth, to develop a new building block of subsea processing for the treatment of seawater for injection (sometimes going as far as desulfation if the reservoir water contains significant levels of barium or calcium), to maintain pressure and optimize recovery of reserves.

In conventional offshore developments, seawater is lifted and treated on the topsides. Seawater treatment systems installed by Total E&P in recent years, mainly on deep offshore FPSOs, usually include a pre-filtration unit, a fine filtration unit, a deoxygenation system, and a nano-filtration unit (for desulfation of seawater).

To meet the challenge of producing remote subsea reservoirs, Total and its collaborators began work on a system for seafloor treatment of seawater for injection.

Screening and conceptual studies between 2008 and 2010 found nothing to hinder the development of this subsea technology, although it was accepted that, as deoxygenation would not be practicable in deepwater, corrosion resistant alloys would be needed for the injection tubing.

The choice of subsea station type depends mainly on the quality of the raw seawater, location, and water depth.

Cost estimates were prepared to compare the full-field costs of using subsea seawater treatment units in 1,500 m (4,920 ft) water depth with the equivalent costs of conventional surface seawater treatment systems such as is often found on an FPSO's topsides. The subsea solution is competitive compared with topsides facilities.

Subsea operation of a seawater treatment unit requires a process capable of operating at the hydrostatic pressure of the water column above. While much of the hardware involved (pumps, valves, instruments, etc.) is already field-proven in deepwater applications, this is not true of the membranes.

Ultra-filtration membranes are not usually operated at pressures above 10 barg (145 psi), while nano-filtration and reverse osmosis membranes commonly have upper operating limits between 35 and 100 barg (508 and 1,450 psi). Qualification testing of membrane performance under hyperbaric conditions was fundamental to any further development of the concept.

Testing was performed in two phases:

Phase 1: Static testing. Membrane samples were immersed in pure water in the laboratory and pressurized to 250 barg (3,626 psi). Once depressurized, thickness was checked by scanning electron microscopy and the performance was within acceptable limits.

Pressures were cyclically raised and lowered to a pre-determined algorithm, with in-line instrumentation provided and samples taken throughout the test to validate membrane performance.

The hyperbaric tests confirmed both the membranes' integrity and performance were within acceptable limits.

The membranes had successfully passed the tests in the laboratory, so it was then decided to try them in real conditions.

Total and partners Saipem and Veolia designed a subsea test unit (STU) to measure the rate of fouling and the in situ performance of the membranes in subsea conditions.

The STU is a module essentially comprising pumps, backwashable coarse filters, and membranes suspended like an ROV, by an umbilical from a floating production unit or support vessel.

The next step in the project is to build and install the STU, and to operate it for six months on a site yet to be selected, most probably in West Africa. The objectives of this pilot test will be to determine the degree of pre-filtration required upstream of the nano-filtration membranes, and whether a CIP system is required or whether occasional membrane retrieval and replacement is practical.

Since water quality varies from one location to another, the SPRINGS unit probably will be tested using STU prior to each application.

Based on a paper presented at the Deep Offshore Technology Conference and Exhibition held Nov. 27-29, 2012, in Perth, Western Australia.