While subsea well intervention is necessary, traditional methods can take time and be costly, with drilling and semisubmersible rig costs running up to $1 million to $1.4 million a day spread rate. 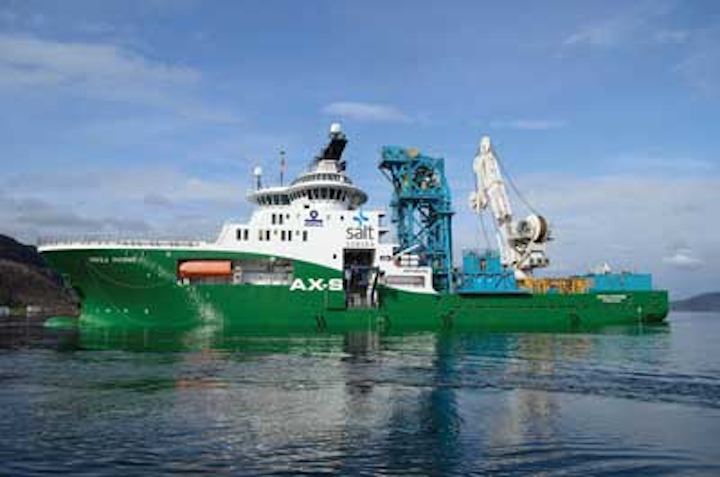 System can be deployed from service vessel

While subsea well intervention is necessary, traditional methods can take time and be costly, with drilling and semisubmersible rig costs running up to $1 million to $1.4 million a day spread rate. Even so, with many of the more than 4,000 existing subsea wells more than a decade old, intervention is crucial to maximize oil and gas extraction.

The sustained rise of deepwater oil and gas exploration makes the challenge of cost-effective well intervention even more pertinent. The deepwater conditions in regions such as Asia, Brazil, West Africa, and the Gulf of Mexico mean many wells that could benefit from intervention have been producing for several years without it. This often results in less than optimum production and reduced ultimate recovery.

An eight-year development program involving a range of partners led Expro to develop a technology that provides cost-effective well intervention designed to close the value recovery gap between subsea and dry tree fields by providing a safe, riserless, remotely operated subsea solution which is at least one-third the cost of using a rig in simple day rate terms.

Expro's AX-S system aboard theHavila Phoenix vessel, completed its final commissioning successfully on a subsea well in a fjord (Onarheimsfjorden), in Norway, in April. Preparations are under way for its first commercial well intervention jobs in the North Sea.

All operations during the commissioning were performed without incident. All the subsea packages were fully deployed twice in a complete stack-up, and 34 tool runs were performed on the well involving a variety of downhole equipment including calipers, production logging tools, CCL, gamma ray, deep set plug, crown plugs, and wireline tractor.

The AX-S system, which is deployed from a vessel, is the world's first intervention technology that can operate in depths up to 10,000 ft (3,000 m). It was designed and built to include the input of more than 200 vendors, and significantly reduces subsea intervention time. As a comparison, a typical deepwater intervention can take 12 to 15 days using a rig, compared to eight to 10 days using AX-S.

The AX-S subsea equipment is 110 ft (33.5 m) tall and weighs 220 tons (200 metric tons). It is deployed onto a subsea tree with fiber rope on an active-heave compensated winch from the vessel, and is remotely controlled from the surface like an ROV. It consists of an integrated set of pressure-contained subsea packages compromising well control package (WCP), tool storage package (TSP), wireline winch package (WWP), and fluid management package (FMP). A hydraulic plug-pulling tool overcomes the risks associated with pulling and setting tree crown plugs, while a novel control umbilical overcomes the challenges of weight and subsequent deployment/handling system size.

The system has a fully enclosed pressure housing, with no dynamic seals between the wellbore and surrounding environments. The WCP is a dual safety barrier containing industry-proven 73⁄8-in. shear seal and gate valves. If any safety issues arise, the operator has time to identify the problem and isolate the wellbore.

Positioned directly above the WCP is the TSP, which contains eight tool pockets located around the inner circumference of the package. The tools are swapped on the seabed in minutes, and because they are held in a pressure-retained housing, no pressure testing is required after each tool change, saving operations time.

The tools are run in the well by the WWP. Containment in a pressure housing eliminates potential problems such as hydrocarbon leaking into the surrounding water or seawater ingress into the well. The winch has 25,000 ft (7,620 m) of mono-conductor e-line wire to convey the intervention tools into the well.

The final subsea section, the FMP, can deploy glycol fluid into the system to flush out seawater and hydrocarbons that are then circulated back into the well or back to the host subsea production system. Depending on the specific needs, seawater can be mixed with the glycol in variable ratios for pressure testing and flushing.

A control cabin on the vessel has a software controlled fly-by-wire interface to control and instruct the various packages on a fully automated basis. The control system is all subsea hydraulic meaning that there are no hydraulic lines back to the surface. To ensure operations are safe and effective, subsea video cameras and an ROV are an integral part of the system.

Expro, Deep Tek Ltd., and Parkburn have developed a fiber rope umbilical bundle and handling system for deployment of the AX-S system that comprises three individual umbilicals helically wrapped around a main fiber rope. This provides greater strength and operational efficiency than wire rope alternatives. It is buoyant in water and therefore adds no weight to the overall deployment system. This also reduces the winch power consumption, surface equipment size, and eliminates torque in the lifting line that can become a hazard.

The technology also improves safety. Because tool swaps are carried out on the seabed, back deck operations are safer. Also, it is only necessary to disconnect the running tool and umbilical from the support vessel to leave location, leaving the system as a fully pressure containing safety barrier on top of the subsea tree.

The system can be more cost-effective than riser-based alternatives because it is supported from a vessel. It is faster to operate than wire-through-water solutions, especially on horizontal trees. Studies by Expro indicate that AX-S is economically attractive for wireline intervention in deepwater wells, and this brings commercial and operational advantages in shallower water regions as well.

Expro has a long-term frame agreement with Total E&P UK Ltd., a subsidiary of the Total Group.

Subsea and deepwater well intervention is increasingly important as operators look to extend reservoir life and maximize production, however with budgets under constant scrutiny, increasing rig costs, and declining unit availability mean intervention may not be possible.

Expro's AX-S system delivers a cost-effective answer to this dilemma and helps to promote good practice and maximize reserves and value through the concept of increased intervention. The emergence of deeper water plays provides a ready market for this technology.

AX-S aims to provide enhanced hydrocarbon recovery by providing wet trees with the same opportunity for intervention and management as is available on dry trees. The system has the potential to transform the economics of subsea well production by providing a safe, cost-effective solution compared to traditional intervention methods.

Matthew Law is technical manager for Expro's AX-S business. He is a Chartered Mechanical Engineer who has been involved in subsea technology for 17 years, specializing in well intervention. Law joined Expro AX-S in 2005 and is responsible for AX-S business development, bringing AX-S to market. Previously, he was Engineering Manager for the AX-S technology development.