A single-well development of a field with modest reserves usually does not capture the headlines, but Total's Islay project in the North Sea stands out for the creative technical solutions it incorporates to overcome some challenging conditions. 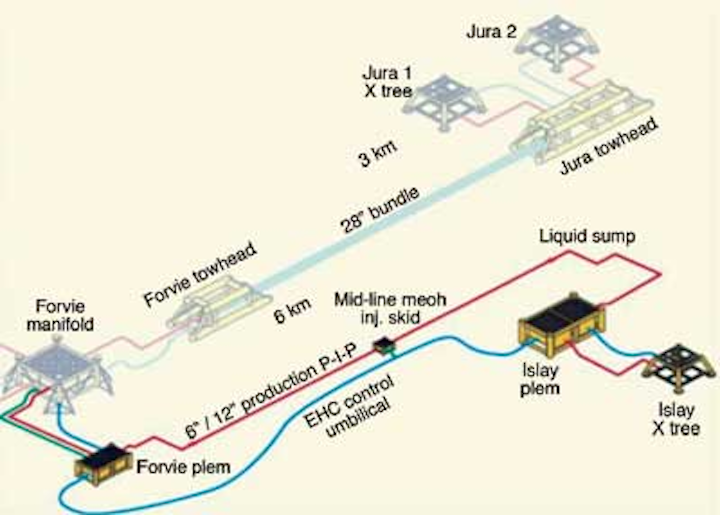 A single-well development of a field with modest reserves usually does not capture the headlines, but Total's Islay project in the North Sea stands out for the creative technical solutions it incorporates to overcome some challenging conditions.

Islay was discovered in 2008 by exploration well 3/15-12, drilled by the semisubmersible rigTransocean John Shaw. In tests the well flowed at 43 MMcf/d of gas and 8,800 b/d of condensate. Having decided that the find was commercial, Total completed the well as a producer and fitted it with an FMC Technologies tree. Reserves are estimated at 17 MMboe of gas and condensate.

In July 2010, the company received approval to develop the field from Britain's Department of Energy and Climate Change. The sanction of the Norwegian authorities was also required, as Islay has a small extension across the median line into Norwegian part-blocks 29/6a and c.

Islay lies in Total's core area in the UK northern North Sea. Here the company's central hub is the two-platform Alwyn North field center, 22 km (13.7 mi) south of which is the Dunbar platform.

But capacity on Dunbar is limited, and a new phase opened in the mid 2000s with the development of Forvie North as a tieback to Alwyn North via the Forvie manifold. The manifold, designed to accommodate additional tiebacks, is connected to Alwyn North by a 32-km (20-mi) pipe-in-pipe system, but controlled through a 17-km (10.6-mi) umbilical from Dunbar.

Total considered tying the field into the Jura subsea facilities 3 km (1.8 mi) to the west, but discarded the option as, in the event of a shutdown, all the connected production systems would have to be depressurized. Instead a direct tieback to the Forvie manifold was selected, to be achieved by means of a 6-km (3.7-mi), 6 ½-in. super duplex pipe-in-pipe system. Technip was awarded an engineering, procurement, installation, and construction (EPIC) contract for pipelay and subsea construction.

Flow assurance issues, particularly hydrate formation, were among the main challenges, especially given the likelihood of early formation water production. The most efficient passive insulation of the flowline was specified, along with an innovative seabed conditioning operation.

Water depth at Islay is 120 m (393 ft), somewhat lower than the water depth of the Forvie manifold. From Islay, therefore, the pipeline is routed away from the Forvie manifold for a short section to form a sump to collect free-draining liquids. In addition, two depressions along the pipeline route, each capable of creating a liquid trap ideal for hydrate formation, were eliminated by seabed excavation.

This reduced the number of depressions to three, one at each end of the flowline and one midway. At each depression, the liquids are dosed with methanol supplied via a super duplex electro-hydraulic umbilical manufactured by Duco.

The combination of localized methanol injection and passive insulation of the flowline are considered sufficient to ensure hydrate mitigation, allowing Total to use Islay as a pilot for a novel pipeline heating system known as electrically trace-heated pipe-in-pipe (ETH-PiP). The technology, developed by Technip, is claimed to offer power efficiencies up to 10 times greater than other pipeline heating approaches such as hot water circulation or direct electrical heating.

The design of the pipeline end-manifold (PLEM), through which entry of the Islay wellstream into the Forvie manifold and pipeline is controlled, was also critical, not least to ensure that its arrival pressure did not exceed the 520-bar (7,542-psi) rating of the Forvie infrastructure. Total opted to install a retrievable HIPPS – high-integrity pressure protection system – within the PLEM with its own independent subsea control module.

This delivery was by DrilQuip, which supplied a similar system for the Jura development as well as the subsea controls for both projects. The control system for Islay is based on a new TCP/IP (transmission control protocol/internet protocol) "open architecture," articulated via fiber-optic and power vehicles using subsea router modules, a first for Total.

To ensure that gas enters the Forvie PiP within its specified operating range, a subsea heat exchanger, or cooling loop, is incorporated in the PLEM. This is a 76-m (249-ft), 8-in. (203-mm) uninsulated piping loop which uses the sea-water temperature of less than 10ºC (50ºF) to cool the pipeline fluids. The PLEM is also equipped with a multi-phase flow meter, multiple pressure and temperature sensors, sand detector, erosion probe, and numerous isolation valves to permit future intervention.

Following weather delays, the PiP was eventually laid by the reel shipApache II in January, with first gas flowing from Islay in April.