A 10-in. PLET and an In-Line Tee are in place in the Sea of Okhotsk at the Kiriniskoye gas/condensate field following installation by JSC Mezhregiontruboprovodstroy with DeepSea engineering consultants providing the installation procedures and performing the related analyses for the job. 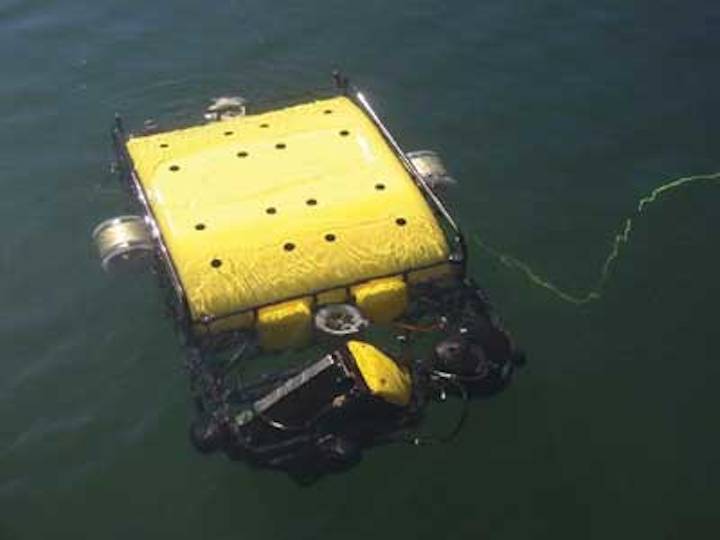 A 10-in. PLET and an In-Line Tee are in place in the Sea of Okhotsk at the Kiriniskoye gas/condensate field following installation by JSC Mezhregiontruboprovodstroy with DeepSea engineering consultants providing the installation procedures and performing the related analyses for the job. The installation was done by the MRTSPLB Fortuna. A 1,600-metric ton (1,764-ton) crane was installed for the purpose.

McDermott has landed a couple of major projects in the Gulf of Mexico. First came an award to deliver new junction facilities for Discovery's Keathley Canyon Connector pipeline system with a 3,300-ton, four-leg platform in 350 ft of water. The unmanned platform will provide pipeline junction facilities for incoming deepwater pipelines from the Hadrian South and Lucius fields and for outgoing shallow-water pipelines to shore. Fabrication is expected to commence this summer at McDermott's Morgan City facility in Louisiana. Offshore installation is expected to commence during 3Q 2013, with operational start-up before the end of the year. Williams Partners owns 60% of the Discovery system and operates it. DCP Midstream Partners owns the other 40%. McDermott's deepwater combination heavy-lift and pipelay vesselDB50 is expected to do the installation. The DB50 has undergone enhancements to its power and propulsion systems, and has a new deepwater lowering system.

McDermott also won a deepwater contract from Williams Partners to transport and install the Gulfstar FPS GS-1 spar hull and moorings in the Gulf of Mexico. The location is 150 mi (241 km) offshore in 4,200 ft (1,280 m) of water in Mississippi Canyon. Again, theDB50 will used. It will pre-install the moorings before bringing the spar out to be upended and ballasted before installing a temporary work deck. The offshore work is expected to begin in 3Q 2013 as is the Keathly Canyon connector project.

In an area not typically thought of as an offshore arena, Technip in combination with National Petroleum Construction Co. won an engineering, procurement, fabrication, installation, commissioning, and start up contract from the Zakum Development Co. for work offshore Abu Dhabi, United Arab Emirates. The field is 84 km (52 mi) offshore. The consortium will provide 240 km (149 mi) of subsea pipelines ranging from 6-in. to 42-in., 128 km (80 mi) of subsea composite and fiber optic cables, plus 30,000 tons of jackets, riser platforms, flare towers, and bridges. The contract also includes the complete initial production facilities for temporary wells hook up to serve initial production distributed amongst the North, South, and Central production islands.

Chevron Overseas Congo Ltd. has awarded Subsea 7 S.A. an engineering, procurement, installation, and commissioning subsea umbilical, riser, and flowline contract for Lianzi field offshore Congo/Angola. The project includes a 12-in. wet insulated production flowline with direct electrical heating. When installed, Subsea 7 says this will be the deepest water to use electrically heated pipe.

The project will use local personnel and resources in Congo and Angola. A significant part of the design and fabrication will be done in Luanda, with additional fabrication work at Lobito by Subsea 7's Angolan joint venture. All flowlines will be spooled to the rigid reel-lay ship theSeven Oceansat Subsea 7's Luanda base in Angola. Angolan and Congolese personnel will join the offshore construction teams during the offshore phase which is scheduled for the second half of 2014.

A couple of new subsea automated tools designed for other industries may have some applications to offshore E&P. At the left is the Bluefin Robotics unmanned underwater vehicle (UUV) called HAUV-3. It is a hovering underwater robot designed to autonomously inspect a ship's hull with 100% sonar coverage. The UUV has passed government testing by the US Navy as the production system for the Explosive Ordnance Disposal project, but inspections done by an AUV without diver assistance might find a place in the oil and gas business. On the right is the CSA's most recent unmanned surface vessel (USV). The USV can be pre programmed or controlled remotely to perform survey transects, while recording and/or streaming data back to its command center. The vehicle has the payload, power, and data bandwidth to carry a variety of sensors, the company says. It is designed for hazardous, remote, sensitive, and shallow-water applications. 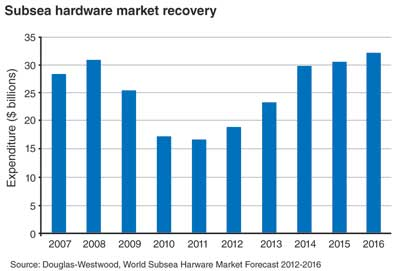 The subsea hardware market is expected to continue its recovery following the global economic crisis and theDeepwater Horizon accident says the Douglas-Westwood update of its "World Subsea Hardware Market Forecast" for 2012-2016.

The forecast estimates spending of $135 billion over the five-year period, or 14% more than the preceding five years. West Africa, the Gulf of Mexico, and Brazil will account for at least 65% of this spending on subsea production and SURF hardware.

Outside of these three areas, subsea pipeline construction is expected to drive spending. Eastern Europe and the FSU spending on gas export lines could reach $21 billion, to lead the world in this category.

Deepwater hardware expenditure is forecast to grow considerably over the next five years. Developments in water depths greater than 500 m (1,640 ft) will account for more than half of the total forecast market spend; illustrating the increasing importance of harder-to-produce reserves.