Production from deeper and more corrosive subsea reservoirs requires pipelines to cope with increasing amounts of carbon dioxide and/or hydrogen sulfide throughout the life of field. 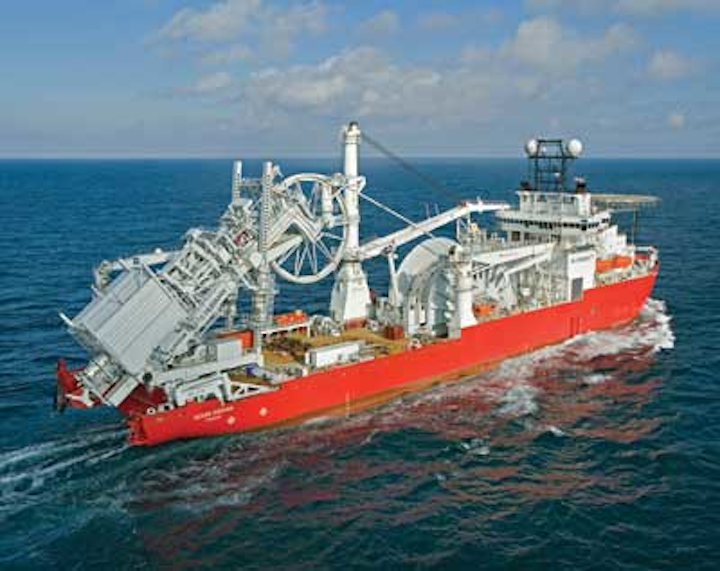 Production from deeper and more corrosive subsea reservoirs requires pipelines to cope with increasing amounts of carbon dioxide and/or hydrogen sulfide throughout the life of field. Subsea 7 and Butting have developed a unique solution that involves reel lay installation of mechanically lined pipe (BuBi lined pipe).

Over the years, Butting lined pipe has been successfully deployed in towed pipeline bundle projects, providing a cost-effective alternative to more expensive options such as solid corrosion-resistant alloys or metallurgically-clad pipe.

More recently, Subsea 7 and Butting have taken the development forward with the BuBi pipe undergoing further qualification in readiness for a world-first installation via the reel-lay method for the ultra-deepwater Guará and Lula NE presalt project in Brazil's Santos basin. The project includes installation of several BuBi pipe steel catenary risers (SCRs) and is the largest contract award of its type to date in Brazil.

The two companies have already qualified BuBi mechanically lined pipe for reel-lay installation for flowlines and low-fatigue riser applications globally with DNV in compliance with the latter's recommended practice for new technology qualification (DNV-RP-A203), and they are now broadening the product's applications into areas of higher pressure and fatigue. In this regard, current testing has demonstrated exceptional fatigue performance to DNV Class C.

The main challenge associated with reel-lay installation of this type of pipe was to demonstrate that the liner does not suffer from local buckling inside the outer carbon steel pipe during the reeling process. Equally important was the need to safeguard the integrity of the weld joining the liner pipe to the outer pipe at the ends of each joint (or seal weld), as a failure at this location in service would expose the outer pipe to the corrosive medium.

A comprehensive development program was conducted. It included:

The full program was performed in accordance with DNV (DNV-RP-A203) and was the first of its type to be awarded the certificate for "fitness for service."

Currently the development program is being expanded to take in larger pipe diameters (up to 16-in.) and higher strength carbon steel outer pipe to further the applicability of the technology to even greater water depth and more challenging design criteria. As a result of the qualification of the reelable mechanically lined pipe, Subsea 7 received the Pipeline Industries Guild's 2012 award for significant contribution to subsea pipeline technology.

In order to extend the qualification range of the fatigue capacity of the BuBi product, the decision was taken to take three more fatigue strings (12 seal welds) to progressively more onerous fatigue levels.

Main objectives of the exercise were 1) to demonstrate the capacity of the BuBi product to survive typical fatigue life requirement corresponding to lined pipeline or low fatigue riser, 2) to assess the maximum fatigue capacity of the BuBi product, and 3) to understand the failure mode and location typical of the BuBi welded joints (no previous work was found that fully investigated the type of fatigue-induced failure that would occur at the liner to overlay interface, where it is anticipated that the crack could initiate).

The fatigue test was sequentially carried-out to the DNV classes E, D, C/2, and C. Selection of level C/2 in particular (Class C divided by a factor two on life) was motivated by a typical operator's requirement for fatigue life capacity of clad pipe. Level C was originally considered as the likely ultimate fatigue capacity of the product.

In order to pass a given design S-N curve, the test string had to reach the calculated target life without failure, defined as follows:

In addition, radiographic testing (RT) was conducted to assess any early indication of flaw propagation in the volume of the welds.

The number of cycles corresponding to the DNV Class C was reached without any indication of a failure at the test welds or in the parent material. A comparative review of the successive RT graphs obtained after each inspection confirmed the absence of any flaw propagation in the volume of the welds.

One of the test pipes, which included four test seal welds and two test girth welds, was further tested to destruction. Failure occurred after 1.56 times the class C target, which is close to the DNV class B1. The fracture locations and fracture faces analysis revealed that the failure arose in the outer pipe parent material first, demonstrating that the liner and seal weld area fatigue performance exceeded that of the carbon steel outer pipe.

The DNV qualified test program performed by Butting and Subsea 7 clearly demonstrates the excellent performance of the BuBi mechanically lined pipe and that it is a cost effective solution for sour service flowlines and SCRs.