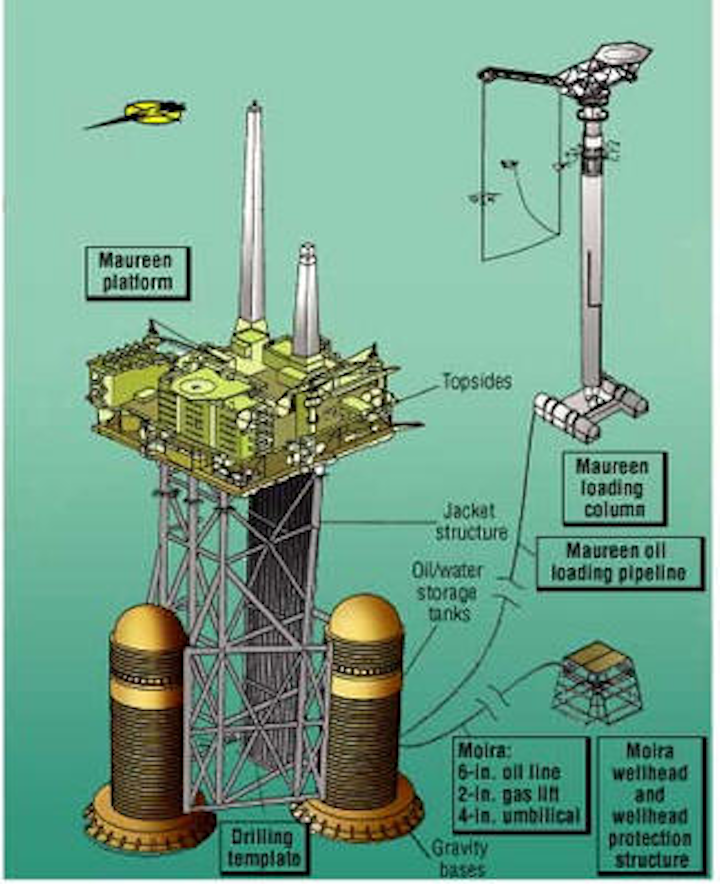 Reflotation of the Maureen gravity platform, after 18 years buried in the North Sea seabed, was accomplished in late June. The 110,000-ton steel installation, including a steel gravity base, was the North Sea's largest platform removal operation to date. Although heavy crane barges were not involved, the lift easily eclipsed the previous record set by Saipem on Esso Norge's 14,000-ton Odin platform in 1997.

The Maureen platform and its associated articulated loading column have since been towed to the Aker Stord decommissioning site near Bergen. Operator Phillips Petroleum and its partners TotalFinaElf, Agip, BG, and Pentex have so far spent $225 million on this operation, including consultation exercises. That sum will rise further, once dismantling gets underway, assuming the option for re-use on another field falls through.

Maureen lies in UK block 16/29a, 163 miles north-east of Aberdeen, and was discovered by a Phillips-led consortium in 1973. At the time of development consent in 1978, no infrastructure was available in the area for exporting the field's crude, so the partners opted for a large steel drilling, production, storage, and accommodation platform connected to a concrete oil loading column 2.3 km distant via a 24-in. pipeline. Oil entering the column would be offloaded to shuttle tankers.

The platform was unique in the North Sea, having been designed to float out to its location and to re-float for use on another field, once production from Maureen had ceased. To this end, the substructure consists of a triangular lattice frame with three submerged cylindrical storage tanks at each corner. These tanks, each 243 ft high, were used for buoyancy and ballasting/deballasting during the marine operations. Once the field was in operation, they would provide storage for 650,000 bbl of crude.

The substructure was anchored to the seabed via sealed compartments at the base of each tank, containing 50,000 metric tons of orecrete. This material provided the structural ballast needed to maintain stability, during tow-out to the field and for the installation. Beneath the tanks, 3.8 meter deep metal skirts were driven 3.4 meters into the seabed to prevent lateral movement of the platform.

Installation in 96 meters water depth was effected in 1983 by settling the platform over a pre-installed drilling template. Topsides facilities included two-stage separation and an electrostatic coalescer, gas compression, water injection, power generation, a drilling workover rig and accommodation for 150 personnel. The field came onstream the same year, with Moira, a small discovery 10 km to the south, also developed as a single-well subsea tieback in 1990. When operations were closed down in October 1999, a total of 223 million bbl had been produced.

Early in the 1990s, production forecasts suggested that depletion would occur about this time. The Maureen owners initiated decommissioning studies in 1993 for the platform and the loading column, including technical feasibility, complexity and risk, and environmental impact and effects on shipping and fishing in the area. Since August 1999, the partners have also held consultations with over 250 interested parties informing them on progress of each stage of the decommissioning program

Having considered the various options, the partners decided to remove all the Maureen and Moira facilities from the seabed, except for the 24-in. export pipeline, which would be left in place, cleaned and buried. They also decided to pursue long-standing efforts to find re-use opportunities for both the platform and the loading column on other fields. However, with no takers coming forward, Aker Stord was contracted in August 2000 to prepare for possible dismantling and recycling of the structure in 2002.

Operations started in November 1999 with plugging and abandonment of the Moira well, followed by the Maureen wells under a two-phase program completed in July 2000. Work was undertaken by the PACT consortium. The following month, work started on cleaning the topsides, removing hydrocarbons where possible. In October, a soil surcharge was placed on the seabed in anticipation of the platform re-float. Then on December 1, approval came through for the major hardware campaign from the UK government.

This February, Phillips began installing equipment on the platform in readiness for the re-float. In April, the Moira subsea facilities were removed for recycling. These consisted of a tree, wellhead, wellhead protection structure, two small diameter infield pipelines, and a control umbilical. It was then a question of waiting for a suitable weather window for the main operation in June.

According to Geoff Tilling, Phillips UK's Decommissioning Manager, the re-float operation looked to be "relatively simple from a physics point of view. But it still appeared a significant challenge to lift 110,000 tons from the seabed." Re-float would be attempted through ballasting and de-ballasting of the three storage tanks and their 49 water-filled compartments.

Pressurized nitrogen would replace ballast water within the tanks to reduce the structure's on-bottom weight.

Once the nitrogen gas cap was established, pressure would drop, ensuring integrity of the tank walls. Tilling explained that this was a safer option than pumping in air, which might have reacted with residual hydrocarbons, causing spontaneous combustion. After the water was pumped out, on-bottom weight would be reduced from 100,000 tons to 6,000 tons.

However, buoyancy alone would not be enough to achieve initial break-out of the tank bases from the seabed. This would be done by injecting water at an even pressure distribution under the bases to jack them upwards, thereby overcoming adhesion to the seabed soils. But the pressure of the water could not be too high. Phillips planned a slow, controlled re-float over 72 hours, to avoid any risk of the platform popping up like a champagne cork. The refloat operation had been computer simulated to assess how it would move and what actions would cause the operation to go wrong. "We also physically modeled the effect of the body moving in the sand," Tilling said.

Probably the most critical issue related to extraction of the tanks' circular skirts, an operation which had not been attempted before on a platform. Additionally, there were doubts over how the irregular clays underlying the seabed sands would react (the skirts penetrated 1 meter into these clays). There was a risk of soil upheaval or development of cavities, resulting in decreased under-base pressure and a consequent inability to refloat the platform. As a safeguard, 2,000 tons of non-toxic gravel and magnetite (a high density form of iron ore) were placed around each tank base to improve soil integrity. The effectiveness of this soil surcharge was verified by two independent geotechnical experts, and would cause only short-lived environmental impact locally.

"We took a serious look at the effect of drag on the clay to establish the pressure that needed to be overcome. We decided to attempt the operation very slowly, using lower pressure first. If that didn't work, we would increase the pressure without compromising the situation." The soil surcharges either side of the skirts would create a resistance to water flow to maintain uplift of the platform. As this occurred, de-ballasting could be effected.

In the event, the operation took 60 hours to complete instead of the anticipated 75, with the raised platform subsequently towed the 165 nautical miles to Stord using six tugs. Seawater displaced from the tanks was pumped into a dedicated tanker, for onward shipment to a facility in Sture, Norway for cleaning and disposal.

A short time afterwards, the 8,000 ton, 131-meter-tall articulated loading column was also removed. This comprised an H-shaped concrete base and a buoyant concrete shaft supporting a rotating steel head and a loading boom. A universal joint in the base allowed the column to articulate to compensate for wave motion. The column sat on the seabed, but again was designed from the outset for re-floating, following removal of the rock placed around the base and dislodging of the rubber skirts underneath using high pressure jets. Two vessels were sufficient for the tow-out to Stord.

The drilling template was the final piece of hardware outstanding. Re-use was considered unrealistic, so the plan was to retrieve it intact, cut it into sections on the transportation barge, and deliver these to the Coflexip spool base in Evanton, northern Scotland.

Although the platform was originally built in the deepwater Loch Kishorn facility in western Scotland, that site is no longer active. Aker Stord was purpose-built for deconstruction of North Sea platforms, and includes a deepwater berth, a large capacity monorail crane, and controlled drainage and recovery systems for fluid waste.

For the platform to be re-used, a field would have to be found with matching technical conditions and a similar water depth, with nearby infrastructure. According to Maureen General Project Manager Andy Halliwell, the feasible locations are in the North Sea, West Africa, Australia, and South East Asia. "We have talked to hundreds of potential operators, but only a handful believed they could use it."

Following the re-float, Phillips is expecting renewed interest, with feedback available on the stresses on the structure while under tow. Its original design life was 20-25 years. The platform would be offered virtually for free. If no one comes forward this year, dismantling will likely start early in 2002. Various options have been drawn up for re-use of the platform's structures, including a quayside. There is also a slight chance someone could come forward for the articulated column for an oilfield destination.

Halliwell estimated that 2,500-5,000 cu meter of sludge on the platform remain to be cleaned out inshore. Hydrocarbon accumulations in the Maureen export pipeline were pumped into a tanker using high velocity flushing. Remaining solids were removed using a brush pig cleaner with chemical gel. The pipeline will remain at its present burial depth of 0.6 meters, and will continue to be monitored.

An estimated 6,000 tons of drill cuttings will be left in place around the footprint of the platform. The cuttings layer is on average 60 cm thick, with a single peak of 1.3 meters close to one of the former tank bases. Outside the platform footprint, there is also evidence of a thin layer of drill cuttings to the west, generally less than 30 cm thick. "Much of the drilling was done with water-based muds," Halliwell pointed out. "That aids our case for leaving them in place."

He claimed that all parties consulted had expressed acceptance of the program for the platform. "Some even commented: Why are you removing it at all? The best environmental option looks to be to leave it in place. That was interesting, coming from environmentalists."